The Israeli government has barred entry to Syrian refugees massing along its border, and although Israel is providing them with humanitarian aid, their increasing numbers are leading many to fear a pending humanitarian crisis. 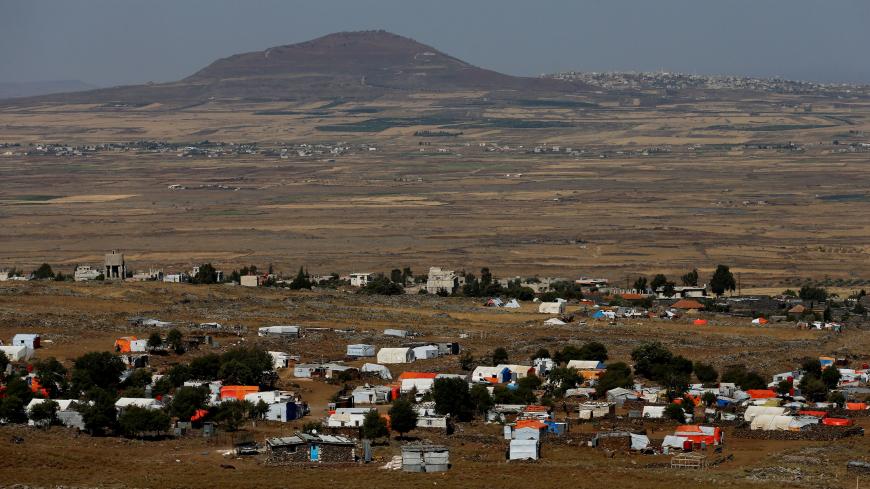 A view of refugee tents erected in Syria is seen from the Israeli-occupied Golan Heights, July 1, 2018. - REUTERS/Ammar Awad

In the past few days, the Syrian army has extended its assault in the country’s southwest, driving thousands from their homes. After a week of fighting, with thousands of Syrian refugees pouring toward Israel on the southern Golan Heights, and despite the human tragedy, Prime Minister Benjamin Netanyahu has not changed his policy barring the entry of refugees except for urgent medical cases.

“We will continue to defend our borders,” Netanyahu told the press at the start of the weekly Cabinet meeting on July 1. “We will extend humanitarian assistance to the extent of our abilities. We will not allow entry into our territory, and we will demand that the 1974 Separation of Forces Agreement with the Syrian army be strictly upheld.” He added that he is continually in contact with the White House and the Kremlin, and that the defense minister and chief of staff are in constant contact with their counterparts as well.

Defense Minister Avigdor Liberman delivered a similar message on June 29. “As always, we will be ready to provide humanitarian aid to civilians, women and children, but we will not accept any Syrian refugee to our territory.”

In fact, while the army of Syrian President Bashar al-Assad continued to assault the town of Daraa, in the south, official sources in Israel made every effort to highlight the humanitarian aid that Israel is offering to refugees fleeing the fighting. Israel Defense Forces officers were sent to the media frontlines to give interviews and briefings about the aid that Israel is providing to these refugees. Israel currently provides them with hundreds of tents, baby food, clothing, fuel and, of course, medical assistance, including the transfer of several refugees to hospitals in Israel. There is no doubt that Israel is taking advantage of the circumstances to show the humanitarian face of a beautiful Israel to the world. At the same time, it is also keeping its border shut, in coordination with the United States, Russia and Jordan.

As far as the Israeli public is concerned, aid to Syrian refugees is viewed as an act of basic human kindness. There has been no opposition to it, even from the political right, as long as it remains limited and does not involve accepting refugees into Israel. The fact is that for a long time now, Israel has not considered these refugees to be enemies. Instead, they are seen as the victims of the Assad regime, which has massacred them and killed their children with poison gas.

Some of these refugees have family in Israel, among the Druze villagers in the Golan Heights and among the general Israeli Arab population. For the past few years, the relatives on the Israeli side of the border have been demanding that the government provide protection and humanitarian assistance to their relatives in Syria. Over the past year, senior members of the Druze community in Israel, such as Kulanu Knesset member Akram Hasson, have been leading a push to absorb Syrian refugees in Israel. In November, Hasson came face to face with the bloody reality that these people are enduring when six of his relatives were killed in the fighting in the Syrian village of Hader.

The big question now is what will happen if and when a massive influx of refugees arrives at the border and images of them pleading for protection are broadcast around the world. This dilemma has been keeping politicians and defense officials busy, as the flow of refugees to the border intensifies.

According to estimates by the United Nations, some 160,000 people have fled areas of current fighting, with approximately 11,000 of them now along the border with Israel and Jordan at the southern Golan Heights. What makes this especially worrying is that the flow of refugees continues to grow, and there is serious fear of a humanitarian disaster in the making.

The Israeli media has shown considerable interest in these events, with in-depth coverage of the waves of refugees to the border and their situation there. The reports are sympathetic to the refugees’ plight, with efforts made to include authentic voices from the ground. For instance, on July 1, Haaretz published an article that included interviews with refugees, who described how they live in fear for their lives. Some of them even said that they expect Israel to protect them and increase the aid that they already receive. The article also describes their flight to the border, with vivid details of thousands of people crammed into trucks, of little children wandering about sobbing because they can’t find their parents, of chaos, terror and the sense of looming humanitarian crisis.

Kan, the Public Broadcasting Corporation, is also providing extensive coverage to the drama unfolding along the northern border and giving a platform to voices from the field. One report included an interview with a Syrian journalist from Quneitra, who warned of another human tragedy in Syria, saying, “The situation here is on the verge on disaster. The Iranian militias are advancing toward Daraa, and people are scared that there will be a massacre.” It was hard to remain indifferent to the images from the border that aired as he spoke. They showed people fleeing for their lives and crowded helplessly along the border.

The official Israeli line, as presented by Netanyahu and Liberman, has almost complete consensus across the political spectrum. The one exception is Meretz Chair Tamar Zandberg. On June 30, she called on Israel to accept the refugees, arguing, “If someone who is running for his life comes knocking at our door to escape genocide as a brutal leader slaughters his own people, it is our moral duty to help, at the most basic human level and as a Jewish state.” No other leader of a Zionist party has expressed similar statements.

Will Netanyahu show greater flexibility if the waves of refugees intensify? “Not a chance,” a senior Likud minister told Al-Monitor, especially since neighboring Jordan has announced unequivocally that it will not accept Daraa refugees. The minister, speaking on the condition of anonymity, explained, “Netanyahu can’t open the border. It does not align with his world view, and it does not serve him politically.”

What this means is that it is unreasonable to expect a scenario in which the Netanyahu government announces that it will accept Syrian refugees in Israel. What about other types of aid, such as a joint international effort to provide military protection for the refugees trapped along the border, particularly if the border comes under increasing pressure?

All sorts of creative ideas are starting to pop up as a result of the current situation, For example, Haim Tomer, a former senior Mossad official, claims that these new refugees from the fighting in southern Syria provide Israel with an exceptional opportunity to increase cooperation with the Sunni Gulf states, while at the same time taking a moral stand. He says that the way to do this would be to create a transit camp for them in Israel and then later transfer them to the Gulf, provided it is agreed upon in advance.