As the Syrian regime's offensive escalates in Daraa, refugees are sleeping out in the open as both Jordan and Israel refuse to open their borders. 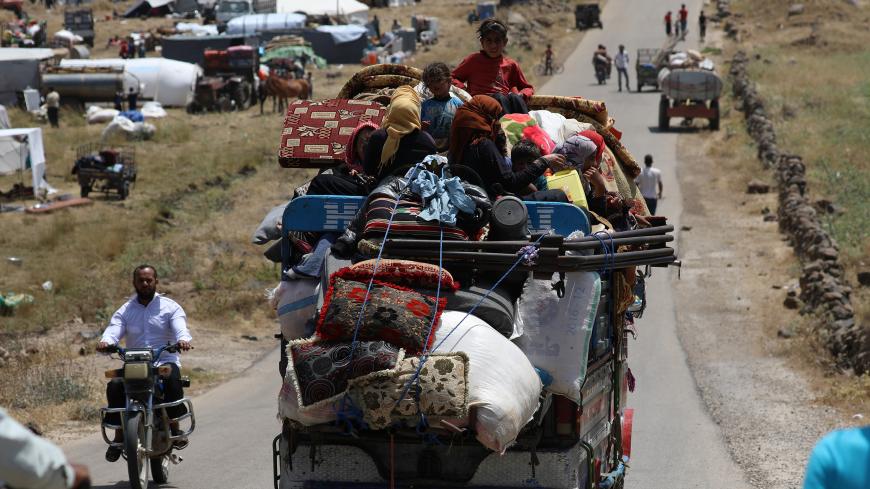 ALEPPO, Syria — The Syrian regime has intensified its airstrikes in the city of Daraa and eastern Daraa province in recent days. The offensive on Daraa started in mid-June, sending more than 300,000 refugees fleeing toward the Israeli and Jordanian borders. Both countries are keeping their land borders closed to refugees, allowing in only special cases.

The Syrian Observatory for Human Rights said July 2 that Daraa towns and villages have been emptied of their residents, and refugees are sleeping out in the open along the border areas.

Israeli army spokesman Avichay Adraee said June 29 on his Facebook page that the Israeli army carried out a special operation in four areas in the Syrian Golan Heights to transfer humanitarian aid for civilians fleeing southern Syria. The aid included 300 tents, 13 tons of food, 30 tons of clothing and footwear, as well as three pallets loaded with medical supplies. Adraee stressed that the Israeli army will continue to enforce its borders.

Defense Minister Avigdor Liberman echoed that stance in a June 29 tweet: “We are closely monitoring events in southern Syria. We will guard Israel’s security interests. As always, we will be ready to provide humanitarian aid to civilians, women and children, but we will not accept any Syrian refugee to our territory.”

Adel al-Masalama, a Syrian who is currently near the Syrian-Israeli border, told Al-Monitor, “We came out in large numbers from the eastern countryside of Daraa toward the border. We learned that the Jordanian authorities refused to open their border to refugees and that the situation is very bad there. We decided to head toward the Israeli border, hoping that Israel would let us in.”

He continued, “Unfortunately, the Israelis did not open the border either. We did, however, receive humanitarian aid from the Israeli army, but we are sleeping out in the open. We know for a fact that the Syrian regime will not target the area along the Israeli border, but we are facing an unknown fate."

Things are the same on the Syrian-Jordanian border, where hundreds of families fled from Daraa as violence escalated in the area, wanting to cross into Jordan, which has been hosting 1.2 million Syrian refugees since 2011.

Jordanian Prime Minister Omar al-Razzaz told Jordan News Agency July 3 that Amman has information that there are armed militants among the refugees. He said Jordan is balancing between protecting its society and delivering support, food and shelter to displaced Syrians. Razzaz added that there is no way for his country to segregate civilians from armed militants on the border, noting that Jordan faced similar scenarios in the past.

Omar al-Zubi, another refugee from Daraa, told Al-Monitor he had been near the Syrian-Jordanian border for several days. The Jordanian authorities "sent some aid, [but] barely enough for half of the number of people here,” he said.

“We don't want any food. We want them to open the border for us so that we can work and get our own food, clothing and anything else. The Arabs have failed the Syrian people for seven years [since the civil war began]. I wish they would learn a thing or two from German Chancellor Angela Merkel, who hosts more than 1.5 million [asylum-seekers] in Germany. Turkish President [Recep] Tayyip Erdogan allowed more than 3 million Syrians into Turkey. There is no other place we can go to. We will stay here and whatever happens, happens,” he said.

The Syrian civilians displaced from Daraa are caught between two dangerous situations: the fire and heavy shelling of the Syrian regime and the refusal of neighboring countries to open their borders. Syrians refugees find themselves in limbo as it has become clear that the international community is incapable of deterring the Syrian regime and its allies from displacing the Syrians.