Israeli silence on the abduction of the two archbishops in Syria underlines the indifference of the Israeli public toward the fate of the Syrian people, writes Akiva Eldar. 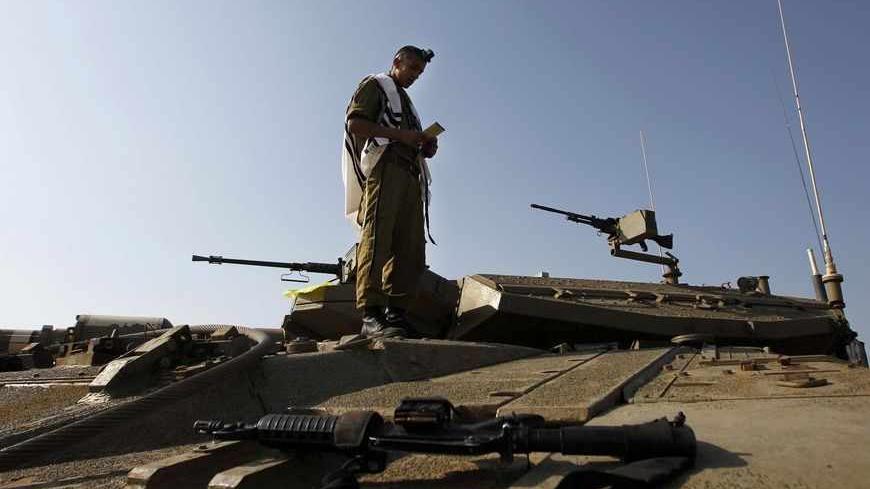 An Israeli soldier prays atop a tank close to the cease-fire line between Israel and Syria on the Israeli-occupied Golan Heights, May 6, 2013. - REUTERS/Baz Ratner

Israel is not indifferent to the Syrian tragedy. Occasionally it even displays active involvement. From time to time Israeli air force planes storm missile depots and weapons making their way to Hezbollah strongholds (according to “foreign sources,” of course). Military analysts announce that Israel is “closely monitoring” signs of chemical weapons use, discuss “red lines” and explain the meaning of “tie-breaking” weaponry. I remember that in March 2012, when horrific pictures showing victims of a Syrian air force bombing on civilian population centers north of the town of Homs were aired on television, then-Foreign Minister Avigdor Liberman said: “The state of the Jewish people cannot sit idly by while atrocities are being committed in a neighboring state and people are losing all they have.” Liberman instructed his ministry to offer the International Red Cross humanitarian aid from Israel for Syrian civilians. The Syrian refugees are still waiting.

At his meeting last week (April 30) with the new pope, Francis I, President Shimon Peres warned of the weapons of mass destruction being developed by Iran and of the chemical weapons being stored in Syria. The Nobel Peace Prize laureate added that he “fears for the fate of the citizens of Iran and Syria under their current fanatical leadership.” He fears? Really? And what is the Nobel Peace Prize laureate willing to do for the sake of Syria’s citizens?

Given its special status in the region (the Arab Peace Initiative which proposes normalization between Israel and the Arab states is still gathering dust), Israel should not be the one to lead a military intervention in Syria. On the other hand, one might have hoped and, yes, even demanded, that in addition to the close monitoring of weapons transfers, the bombings and the wide-scale military reserve exercise held at the end of last week on the Golan Heights [April 30], Israel had devoted efforts to preparing a small part of the Golan Heights to take in Syrian refugees. There was plenty of time to get ready and resources could have been found.

Israel’s concern and sensitivity to the transfer of munitions to Hezbollah is understandable; what’s hard to accept is the indifference toward the plight of its neighbors exhibited by the country that prides itself of being “a villa in the jungle” and “the only democracy in the Middle East.” Jordan. Iraq, Lebanon and Turkey, the other countries bordering Syria, have already taken in hundreds of thousands of refugees fleeing the Syrian inferno. And Israel, the only country in the world that holds Syrian territory, keeps looking on from the sidelines. The policy of the Netanyahu government is reminiscent of the Begin government’s policy toward the horrible war between Iraq and Iran (1980-1988). Asked which side he supports, the late Prime Minister Menachem Begin answered with a smile: “We wish both sides the best of luck.” In Iran, by the way, they still remember this phrase.

Last week I wrote, along with my colleague Kadri Gursel, about the kidnapping of the Syrian Orthodox Archbishop Yohanna Ibrahim and Aleppo's Greek Orthodox Archbishop Boulos Yaziji by rebel forces in Syria. On April 22, the two were making their way back from the Turkish border, having crossed it in an effort to bring back two priests who were kidnapped a long time ago. They encountered a roadblock erected by armed forces, who killed their driver and took the two to an undisclosed location. It’s now been two weeks since the kidnapping and the demands of the group holding them are still unknown. Nonetheless, it’s easy to surmise that such an act has a threatening effect on Christians, who make up 10% of the country’s population. Almost one-third are assumed to have left the country. In reporting on the kidnapping, Gursel took the opportunity to raise questions about Turkey’s policy regarding Syria, in general, and its links with rebel groups, in particular.

Perhaps the attack on two such senior Christian figures provides an opportunity for a debate in Israel regarding its own responsibility for the continued massacre taking place close to its border. One can easily imagine the commotion Israel would have raised in reaction to the kidnapping of two senior rabbis, leaders of their communities, on the other side of the world.

Jerusalem would do well to heed the words of Prince Hassan bin Talal of Jordan. The prince (a Muslim) saw fit to focus on the kidnapping: “The kidnapping of my dear friends, the Syrian Orthodox Archbishop Yohanna Ibrahim and the Greek Orthodox Archbishop Boulos Yaziji a few days ago is yet another sign of a dangerous slide toward self-destruction in the lands and societies where the children of the Abrahamic faiths have long lived together. I call for the release and safe passage of the bishops, so that they can continue with their humanitarian work urgently needed in such times and for an end to the violence being wrought in the name of secularism, religions or some ideology or other.”

Forty-six years of occupation are evident everywhere we turn. The violent conflict with the Palestinians placed the distinction between Jews and non-Jews before any long-term moral consideration and diplomatic consideration. The Talmudic saying, "The poor of your own town have prior rights" (Babylonian Talmud, Baba Metzia 71a), has been translated by Israelis into indifference toward the plight of neighbors whose bombed-out cities are just around the corner. Israelis should notice that the Talmud uses the word “prior,” but not “dismiss,” hence not dismissing care for the neighboring poor.

Syria’s citizens, just like the Palestinians, are considered “Arabs,” a common, faceless collective, a bloc of inferior humans. The media reports the numbers of dead in Syria as though they were reporting on foreign currency exchange tables. Many don’t know whether they are Sunni or Shiites, or what, in any case, is the difference between the two. The Israeli soldier at the Bethlehem checkpoint only sees “Arabs” and one and all are suspected of being terrorists. It’s all the same to him whether they are Muslims, Christians or Buddhists. It’s therefore little wonder that the local media did not see fit to report the kidnapping of the Christian leaders in Syria and that Israel’s leaders, including the ones courting the Christian right in the US and soliciting donations, did not bother to address the fate of the clerics.

As is nearly always the case, a handful of moral, courageous people do a bit to save Israel’s reputation. In secret, without fear or bias, a group of Israeli volunteers has been coming to the Turkish-Syrian border since July 2011 and providing humanitarian assistance to the refugees. They don’t always succeed. For example, when they asked last May to bring to Israel a man who was blinded in one eye by shrapnel and was in danger of losing his other eye,  then-Interior Minister Eli Yishai demanded that his family post a bond of NIS 200,000 (more than $50,000) as a condition for granting the injured man and his family entry into the country (it appears that the obsessive hostility of the deposed Shas Party leader is directed toward foreigners, in general, not only toward migrant workers and refugees from Eritrea and Darfur). By doing so, Yishai undermined an initiative to hospitalize other injured Syrians in Israel. Knesset member Israel Hasson (of the Kadima Party), who was born in Syria, described Yishai’s decision as “despicable and insensitive.”

Hasson, who served as deputy director of the Shin Bet security agency, added: “One day, Israel will be asked where it was when Syrian civilians were being massacred.” And, in fact, where were we?