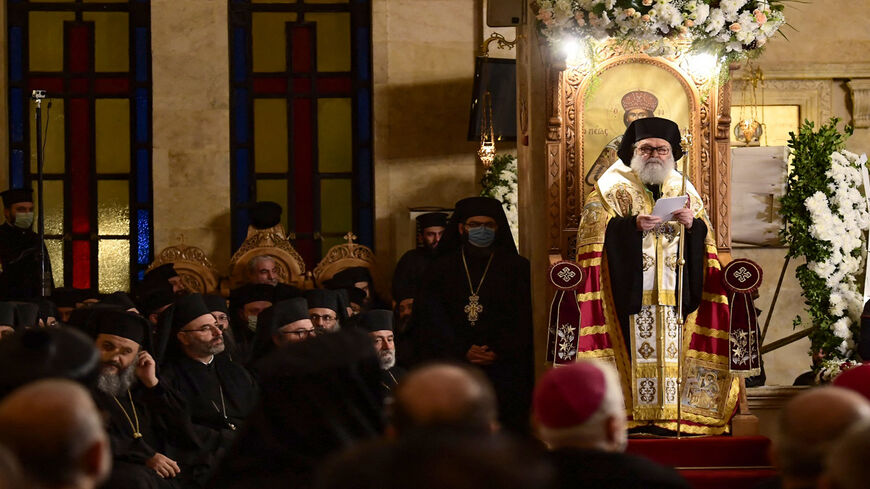 Bishop Ephraim Maalouli (R) speaks at a ceremony, after he was appointed as the new metropolitan of the Greek Orthodox archieparchy of Aleppo and Alexandretta, at Saint Elias Cathedral, Aleppo, Syria, Dec. 10, 2021. - AFP via Getty Images

The Syrian Cabinet issued Nov. 30 a decision exempting some categories — including Christian clergy, such as patriarchs, bishops and their drivers, priests, deacons, monks and nuns — from paying $100 in exchange for Syrian currency when entering the country provided that they carry a paper slip proving that they are on a church mission between Syria and Lebanon.

This came following a decision that obliges Syrians to exchange $100 before entering Syria, which places them in the face of major challenges and exacerbates their living crisis. Such decisions aim to supply the treasury with hard currency, despite the alleged exceptions.

On June 14, the Syrian government raised the exchange rate for the $100 imposed on Syrians entering their country from 1,256 to 2,500 Syrian pounds.

This decision is linked to another decision to increase the exchange rate for remittances in a bid to have more foreign currency. This is while the Syrian Central Bank maintains a rate of 1,250 pounds per dollar in its official bulletins.

A comparison between the official rate and the rate on the black market shows that the government provided exemption to the included categories of only $20.

Ayman Abdel Nour, New York-based president of Syrian Christians for Peace, told Al-Monitor, “The nature of the Christian clergy’s work requires them to move between the churches in Lebanon and Syria, because the ecclesiastical work division was established prior to the demarcation of the border in accordance to the Sykes-Picot Agreement, which means that [churches] in the two countries were linked to each other. Based on coordination with the heads of these denominations, the regime exempted them from paying the tax imposed on [other Syrians] upon entering Syria. The regime’s decision has nothing to do with any attempt to attract minorities to its side.”

The new decision comes after the Syrian government established the private Christian theology college in Damascus, which is the first of its kind in Syria, according to Legislative Decree No. 6 of 2019 issued by President Bashar al-Assad.

Patriarch of Antioch for Melkite Greek Catholic Youssef al-Absi said at the time, “The symbols of the message we carry are the virtue and knowledge and have been evident through openness to all religions, the books and sacred religious teachings. There are patriarchal educational institutions in Beirut and Cairo, and today in Damascus, which has been distinguished throughout the ages by an intellectual, cultural and religious pluralism believing in God, man and the homeland."

Minister of Higher Education of Syria Bassam Ibrahim said, “This college is the first of its kind at the academic level in Syria, as it teaches theology and qualifies specialized and distinguished staff who have the knowledge and research capabilities in religious sciences, so as to enrich human knowledge and serve the community. Syria today proves that it is the country of tolerance, the cradle of Christianity, the incubator of Islam and the beacon of moderation that is deeply rooted in its civilization. [It also proves] that renouncing extremism, violence, hatred and discrimination are among the components of the Syrian society.”

Israel’s Kan Channel reported that the Syrian government allowed six Jewish women and six men, who moved to New York decades ago, to visit Damascus in early November, in a bid to encourage more Jews to visit Syria.

The bishops were kidnapped on April 22, 2013, on their way from the Turkish border to Aleppo, after conducting some humanitarian work in Kfar Dael in Aleppo countryside, between the regime and opposition-held areas.

Yazigi is known for criticizing the Syrian government, but he declared many times that Islam has nothing to do with the actions of extremist Islamic groups. He also held many meetings and conferences to bring the Islamic and Christian religions closer.