Attacks against Syria’s Christians are not only motivated by extremist Islamic ideology, but also because of the strategic area in which they live, writes Jean Aziz. 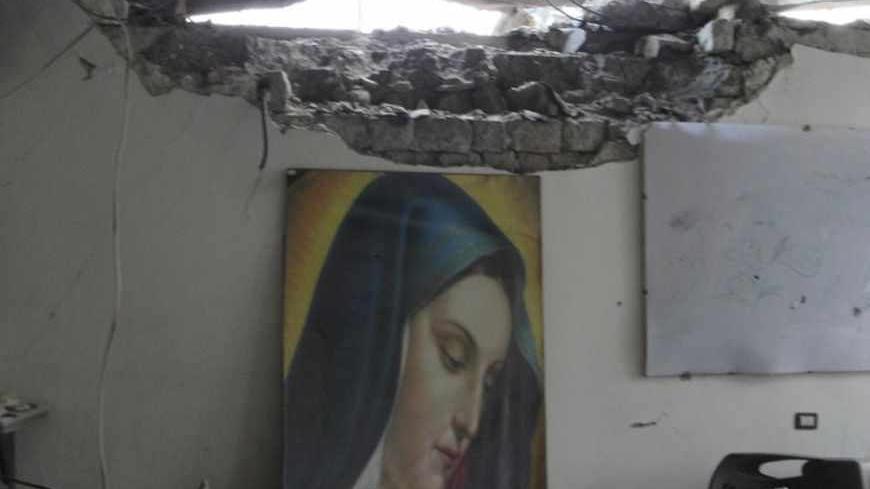 Throughout the two-year-old Syrian civil war, the world powers as well as the Syrian parties involved have said that the country’s minorities, especially its Christians, face an existential threat. Despite warnings and condemnations of attacks by all sides, however, it looks as if what had long been feared is actually happening. Why? Perhaps because the tragedy of Syria’s Christians is linked to not only fundamentalist and ideological motives but also to geostrategic calculations.

Looking back at statements condemning the targeting of Syria’s Christians, one notices that both the regime and its opponents made such statements as either part of a propaganda effort or in confessing their own mistakes. For its part, the Syrian government has a long history of portraying itself as the protector of its minorities under the pretext that its partisan composition is “secular” and that it has fought Islamic militant groups for decades.

On the other hand, opposition officials have tried from the start to address the issue and minimize the Islamic aspect of its opposition. They have relentlessly placed non-Sunni figures at the forefront. The opposition made Abdulbaset Sieda, a Kurd, head of the Syrian National Council. That post was then given to George Sabra, a Christian. The Muslim Brotherhood then made another Kurd, Ghassan Hitto, head of the opposition’s interim government.

Such moves, however, have not assuaged the fear felt by Syria’s religious minorities, especially the Christians. Worse, the al-Qaeda-linked Jabhat al-Nusra has gained control of several areas, after which it has imposed Sunni Islamic law. Thus the situation now involves religious persecution and the possibility of ethnic cleansing, genocide and population transfers.

Since the beginning of the civil war, Syrian church officials have been warning of a dark fate awaiting the country's Christians, a fate similar to that of Iraq’s Christians. On June 16, 2011, the bishops of Damascus called on Syrian Christians to avoid getting dragged into the “battle of the axes” and to not bet on foreign entities. A few months later, in September 2011, Maronite Patriarch Bechara Boutros al-Rai met with French President Nicolas Sarkozy in Paris and warned him that Syria’s Christians were in danger. Afterward, almost all Christian religious officials, from every denomination, started speaking out on the issue.

On Dec. 29, 2012, Rev. Abraham Nusseir, head of the Evangelical Church in Aleppo, criticized what he described as French positions that “encourage the emigration of the Christians from Syria.” According to him, "A French official said that the number of Christians in the region is not large and that European countries are able to accommodate them. Then Germany declared its willingness to receive 20,000 Christian families. But those statements were not made out of concern or love for us but to implement a plan aimed at emptying the region of its Christians.”

Melkite Greek-Catholic Patriarch Gregory III Laham appealed to the world on April 12, 2013, when he stated, “There are between one and a half million and two million Christians of various denominations in Syria. With the exception of Egypt, there are more Christians in Syria than in any other Arab country, including Lebanon. The future of the Christians in Syria is threatened, not by the Muslims, but by the current crisis, the chaos, and the arrival of rival fanatical fundamentalist militant Islamic groups, which are attacking the Christians. There have been thousands of victims among civilians, priests, men, women, and children. Hundreds of thousands have been internally displaced or left for Lebanon, Jordan, Egypt, Iraq, Turkey or elsewhere. Between 250,000 to 400,000 people have left for the West, especially to Sweden, Canada, and the United States. The Christians are leaving their towns, villages, and neighborhoods. Whole villages, such as the town of Darya, have been emptied of Christians.”

Two days after Gregory's message, Yohanna Ibrahim, the Syriac Orthodox archbishop in Aleppo, reported, “About a third of Syrian Christians have emigrated from Syria since the uprising started in March 2011. I am having difficulty convincing the Christians, who number about one and a half million, to not emigrate as a result of the difficult security conditions and the threats they are facing every day.”

On Feb. 2, the writer Michel Kilo, a leftist Christian with the opposition, said that a large number of Christians in the cities of Homs and Hama had been displaced. He revealed, “Some jihadist groups threatened the Christians in the area of ​​al-Ghab, specifically in the towns of Mharda and al-Suqaylabiyah in central Syria. The Christians in the village of al-Masmiyya, in the Houran in Syria’s south, received similar threats from Jabhat al-Nusra on the grounds that the Christians support the regime.”

Most of the Western media have talked openly about a “religious war.” Renault Gerrard wrote in Le Figaro on Dec. 26, 2012, “We must not hide our faces. In Homs, a religious war has begun. The Islamists in Syria have used the slogan, ‘The Alawites to the grave and the Christians to Beirut.’ This is tragic but it’s the truth. If Bashar al-Assad’s regime falls tomorrow, there is no doubt that Islamists will take power. Revenge on the Alawites, the Christians and the Druze would be horrible. Religious freedom in Syria will end.”

On Aug. 10, 2012, an AFP field investigation reported Mohammad al-Sansawi, a Jabhat al-Nusra official, as saying, “We will establish an Islamic state from here to Lebanon, where there are prostitutes and casinos.”

Those familiar with Syrian geography say that in addition to the “religious war” motive, another factor responsible for the Christians' situation is the way in which the sects are distributed in the country. They note that the Christian areas are mostly in Wadi al-Ouyoun and Wadi al-Nasara, which have a million Christians and are the largest continuous Christian settlements in the Middle East. Experts say that the tragedy of this region lies in its being located in the heart of a fierce struggle having both religious and economic aspects.

This Christian area sits on the banks of the Orontes River. It separates the Syrian desert from Syria’s “green areas.” It contains a mountain range that is an extension of the mountains in Lebanon and Turkey and serves as a buffer between the coast and the interior. The Alawite areas are in the mountainous territory near the coast, the Sunnis are mostly in the interior, and the Christians separate the two quarrelling sects.

Military experts assert that whoever controls the area of the valleys would be able to split Syria in two, cut the road to Aleppo at either Homs or Hama and cut the Latakia-Tartus road on the coast. To put it even more simply, the experts say that whoever controls the Christian areas can control the war in Syria. They can either lay seige to the coast or strengthen it and protect it from attacks by forming a mountain-based defensive line connecting Tartus and Homs and joining the area of the valleys to the coastal strip, which would be safe from invasion.

The other important feature of the region is that all the oil and gas transportation lines from Iran and Iraq to the Mediterranean pass through it. There is also talk of undiscovered oil riches in the area as well as off the Syrian coast.

For these reasons, it seems that the Christians of Syria now stand at the center of a tragedy, risking extermination or displacement. Until now the world has been satisfied with merely monitoring. A nun who is responsible for a Syrian monastery said to her fellow nuns in an Easter letter on March 23, “Every night, pray the rosary for the sake of our enemies, because they know not what they do!”

Editor's note: A few hours before this article went to press, Yohanna Ibrahim and Boulos Yazagi, the Syriac Orthodox and Greek Orthodox archbishops of Aleppo, respectively, were kidnapped.

Jean Aziz is a contributing writer for Al-Monitor’s Lebanon Pulse. He is also a columnist at Al-Akhbar (Lebanon) and the host of a weekly political talk show on OTV.