Christians in the strategic Wadi al-Nasara area are pinning their defense on the Syrian army’s ability to hold the Islamic State and Jabhat al-Nusra at bay. 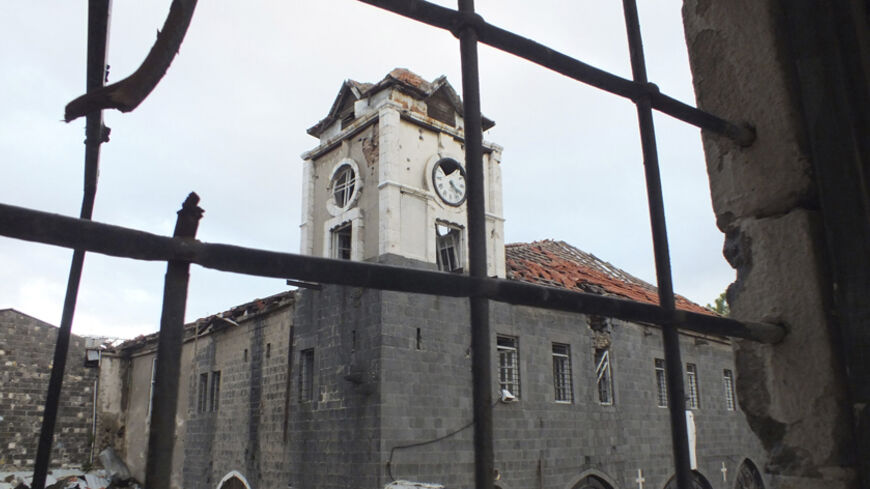 A damaged Orthodox Church in the besieged area of Homs, Dec. 8, 2013. - REUTERS/Yazan Homsy

A correspondent in Damascus
September 9, 2014

WADI AL-NASARA, Syria — The Christian residents of Wadi al-Nasara have felt reassurance and calm as the Syrian regime has been able to maintain control over the area and its surroundings throughout much of the conflict. But that ease has been rattled by the Islamic State’s (IS) advances in the east of Syria, and the violations it committed against Christians in Mosul.

The Wadi al-Nasara region is in the countryside of western Homs. It's made up of a group of villages located below the surrounding ones. Most inhabitants are Christians and the largest village is Marmarita. Although Wadi al-Nasara administratively belongs to Homs province, it is geographically and demographically closer to the mountains of the Syrian coast, as they merge with the town of Tartus from the west. Moreover, Wadi al-Nasara and its surroundings have particular importance in the context of the conflict raging in Syria because it enjoys pronounced sectarian diversity, with Alawite, Sunni and Christian villages spread throughout the area. Moreover, the region has significant strategic value as it overlooks the southeastern entrance of the Syrian coast, which is considered the stronghold of the Syrian regime.

To the south of Wadi al-Nasara is the mostly Sunni town of Krak des Chevaliers — named after the Crusader era castle that, before the war, was one of the most well-preserved medieval castles in the world — and the towns of al-Zara and Telkalakh, which staged massive protests against the Syrian regime and faced violent crackdowns. The towns fell under rebel control, but in March Syrian forces took control of most of the region and entered Krak des Chevaliers.

When brigades with Islamist tendencies in mid-2012 took over al-Zara and Krak des Chevaliers, which are close to the villages of Wadi al-Nasara, fear and concern gripped residents of the area, with local youth joining the fighting alongside government forces as part of the National Defense Forces. The inhabitants of Wadi al-Nasara regained their tranquility after the rebel brigades were defeated and expelled from the towns, which remain deserted today.

On a high mountain adjacent to Marmarita a large monument of the Virgin Mary is located, which overlooks a plain valley including the Christian village of al-Nasirah, while the al-Hosn fort and the town surrounding it lie at the end of the valley.

Al-Monitor was accompanied there by a local man from Marmarita, who wished to remain anonymous. From where we stood, next to the statue, he pointed toward the town of al-Hosn.

“Who would believe that this small town surrounding the castle in front of us witnessed battles and violent cannon and aircraft shelling for over 1½ years and that hundreds of martyrs died to expel the militants? If only a few militants caused all this havoc, what would happen today if IS' men attacked us?” he said.

The man said villagers had no choice but to turn to the government, for the alternative was annihilation.

“It is true that the militants in al-Zara and al-Hosn never attacked the civilians throughout their presence here, but most of them are Islamists and cannot be trusted. I think if they win, they will persecute us, like what happened in Mosul. We fear the collapse of the state’s power and we can only feel safe under its protection,” he said.

In the evenings in the lively Marmarita town, dozens of young men and women roam the streets and loud music fills the air. It seems that life is completely normal here. However, a brief conversation with the owner of a convenience store selling alcohol was enough to indicate the extent of concern veiled by what seemed a normal life.

“It won’t be long before IS comes and prohibits alcohol,” I jokingly told him. With a serious and tense tone, he replied, “I know, and they might even kill us or kick us out of here, as happened in Mosul.” The anger in his tone of voice rose as he continued, “There are battles raging here, about 15 kilometers [9 miles] behind the Dahr al-Qasir zone, and the situation is not much different. Haven’t you seen what happened at the Tabaqa airport?”

The man accompanying me explained that Dahr al-Qasir is a mountainous area to the east of Wadi al-Nasara and the Houla area, where fierce battles are taking place, is directly behind it. “Had it not been for the high mountains of Dahr al-Qasir, we could have heard the sounds of shells and clashes. There are armed brigades out there and these have nothing to do with IS. But most people here do not believe that there is a difference between IS and other opposition factions and Islamist armed battalions.”

Many of the residents of the Christian town of Mhardeh in the countryside of Hama have been displaced to the villages of Wadi al-Nasara after ​​armed factions, including Jabhat al-Nusra, progressed toward their town. A woman we met as we were touring the area told us: “Those displaced from Mhardeh have rented houses at high prices. It seems that their money enabled them to get out of the village. They looked scared and worried. They rarely speak about what is happening in their town, but they are confident that they will be returning soon because their men are fighting there alongside the Syrian army. The new arrivals’ silence and their refusal to mix instils more fear in us and makes us wonder what has happened in Mhardeh?”

There are many opponents of the Syrian regime in the area of​​ Wadi al-Nasara, and the village of Hab Nemra was known as "little Moscow" after the many left-wing activists in the town, a large number of whom have entered regime prisons over the last century. One local left-wing opponent said, “We felt helpless as we watched most of the people drifting behind the Syrian regime’s rhetoric about sectarianism and its Sunni opponents’ extremism. We were even persecuted because of our pro-demonstrator positions at the beginning of the revolution. Today, everyone seems afraid of the increasing numbers of Islamist extremists. I do not think that the protection of Christians is possible to achieve by fighting alongside dictatorship. There should have been a struggle for democracy instead.”

It is impossible to anticipate the outcome of the situation. The Wadi al-Nasara area, despite being fortified by its geographical location, may not be immune from the returning battles in the surrounding areas if the war continues to rage in the coming months. This was said by a local regime opponent who told us, “Not all of the residents of the two neighboring villages of al-Zara and al-Hosn died. Some of them fled with most of the armed locals to other areas. There is no doubt that they are waiting for the chance to return to their homes and lands and possibly take revenge against elements of the National Defense Forces who expelled them and looted their properties.”