Domestic tourism failed to compensate for the major losses incurred by Syria’s tourism sector as a result of the war. 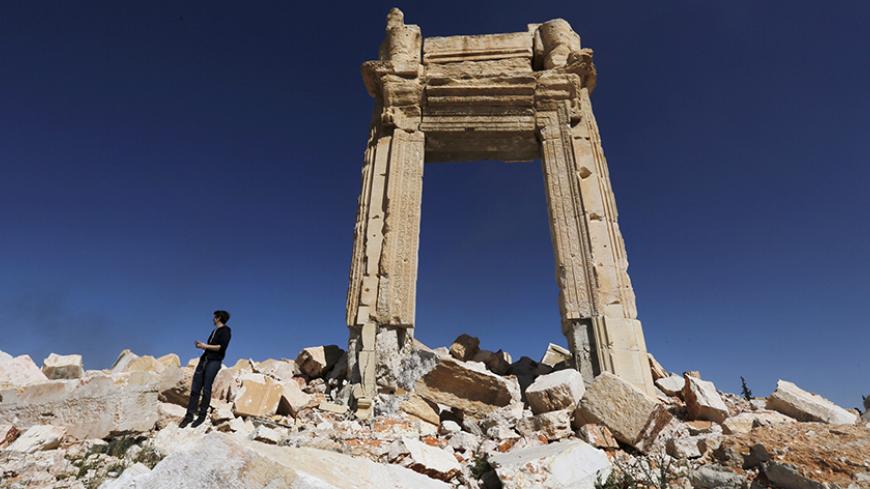 A journalist stands at the remains of the Temple of Bel in the historic city of Palmyra, in Homs governorate, Syria, April 1, 2016. - REUTERS/Omar Sanadiki

DAMASCUS, Syria — Although not many people are planning vacations to Syria these days, Tourism Minister Bishr Yaziji remains busy promoting domestic tourism in territories that remain under government control.

Before civil war broke out in March 2011, Syria had been one of the world's leading tourist destinations in the Middle East, attracting millions of people from around the world thanks to its rich cultural heritage and history — Damascus and Aleppo are two of the world's oldest cities — and the beauty and diversity of its nature, including the sea, mountains and desert. Syria is home to more than 14,000 archaeological sites, 65 castles and a panoply of museums, mosques, churches and historic temples, many of which have unfortunately been destroyed during the war.

As one would expect, Arab and other tourists have been reluctant to visit due to the security risks, Arab and Western governments' boycott of the Syrian government, jihadist groups, especially the Islamic State (IS) — having seized control of large areas of the country — and the destruction of monuments in Palmyra, Aleppo, Damascus and other places.

According to sources from the Tourism Ministry, the number of tourists fell from 5 million in 2010 to less than 400,000 in 2015. Consequently, tourism revenue has fallen by about 98% since the outbreak of the war, a loss to the tourism sector of about $6 billion. Opposition sources, however, estimate the loss to be more than $15 billion. The sector once constituted 14% of gross domestic product and employed 13% of the workforce, generating nearly $6 billion a year for the Syrian economy. The war, however, has led to the closure of tourist facilities and worker layoffs.

Yaziji said in a press interview in 2015, “The acts of vandalism that occurred to tourist and archaeological sites have caused great damage to the tourism sector. Tourism fell by 98% compared to 2010, and tourism revenues declined, while the total loss reached about 387 billion Syrian pounds [annually]” — that is, about $1 billion at the time.

A source at the Tourism Ministry who requested anonymity told Al-Monitor that the war has caused 1,294 private sector tourist establishments to close and has halted 544 tourism-related projects under construction. The losses incurred by the sector include 262,000 jobs at tourist facilities and related services. Also, the financial loss to the entire economy due to the drop in tourism between 2011 and 2015 amounted to 4,750 billion Syrian pounds ($10 billion).

This tragic reality has prompted the Tourism Ministry to promote domestic tourism to try to compensate at least in part for lost revenue from foreign tourism. One example is the ministry-sponsored Sand Sculpture Forum, held on the beach at Latakia Aug. 8-15, during which artists participated and taught children how to build sand sculptures. At the event, Yaziji said that the ministry is focusing on accelerating projects in the coastal provinces of Latakia and Tartus, such as promoting public beaches and supporting small projects to boost rural development aimed at helping poor families in government-controlled provinces.

Yaziji stated that new hotels and restaurants have been opened in Latakia and Tartus, and some tourism agencies have reopened amid good hotel occupancy rates, particularly in the coastal areas. He also claimed that a large number of Syrian expatriates have returned home this year. Before the war, domestic tourism accounted for about a quarter of tourism overall in the country, with the coastal region, including beaches and the mountains, responsible for 80% of it, the Syrian Central Bureau of Statistics was reported as saying in 2011.

At the end of July, the Tourism Ministry had sponsored the Castle and the Valley Festival, featuring four days of cultural, artistic and sporting events in the city of Homs. At that event, Yaziji stressed the importance of increasing the number of low-cost and simple attractions. He said that his ministry, in collaboration with the Ministry of Higher Education, plans to conclude memorandums of understanding with Syrian universities to launch tourist programs that engage Syrian students and other youths.

Naji Darwish, a member of the Supreme Committee for the Castle and the Valley Festival, told Al-Monitor, “The festival had two goals. The first was to convey a message to the world. It has managed to do so as the Crac des Chevaliers in Homs, which had previously witnessed fighting, is today completely safe and is welcoming visitors, and we saw it full of lights during the night hours of the festival.” The festival, held in Wadi al-Nasara, in the northwestern countryside of Homs, was not held from 2011 to 2014 because of the war, but resumed in 2015.

Darwish continued, “[The second goal was] to spread joy. However, the festival failed to do so, because it had to be dedicated to the families of victims and wounded civilians and military personnel. It should be mentioned that these festivals are poorly organized in terms of their timing, expense management, advertisement to attract the public and expatriates, and the selection of appropriate activities.”

Hammam Sheikh Ali, a young Damascene, told Al-Monitor, “The Ministry of Tourism should further focus on domestic tourism, because there are a lot of existing tourist destinations in safe places in Syria both in the mountains and on the coast. The ministry should also find ways to provide facilities to citizens so that they can visit these attractions. For example, it could lower hotel rates, subsidize the residents of those areas and further promote these destinations, especially in light of the difficult economic situation plaguing the country.”

Charlton Peng, a Taiwanese journalist who recently visited Homs and its countryside, told Al-Monitor, “I am very surprised by what I've seen. The Syria we see in the media is different from the Syria I see now. There are very nice places, and despite the fact that the country has been witnessing a war for years, it continues to breathe, as opposed to the typical images of devastation that we see in the media.”

The Tourism Ministry announced in June that it is working with Iran and Russia to cooperate on religious tourism and develop the Sayyeda Zeinab area in southern Damascus, which includes the shrine of Sayyeda Zeinab, the daughter of Ali bin Abi Talib, a cousin and son-in-law of the Prophet Muhammad. The plan is for it to become a sister city of Mashhad, Iran. There are also plans to rehabilitate the cities of Maaloula and Sednaya, home to important Christian monuments in Rif Dimashq, and launch entertainment programs in cooperation with the Russians.

As with other countries — such as Lebanon, where war wreaked havoc on the tourism sector and successive governments failed to promote domestic tourism — one cannot expect ground-breaking developments in domestic tourism in Syria in light of the ongoing war being fought in the cities and countryside. In addition, the devaluation of the Syrian pound has resulted in inflation that has significantly raised the cost of living, turning domestic tourism into a luxury that few Syrians can afford.