Would Syria Retaliate Against Turkey?

Al-Monitor’s analysis coverage of a possible US military strike on Syria. 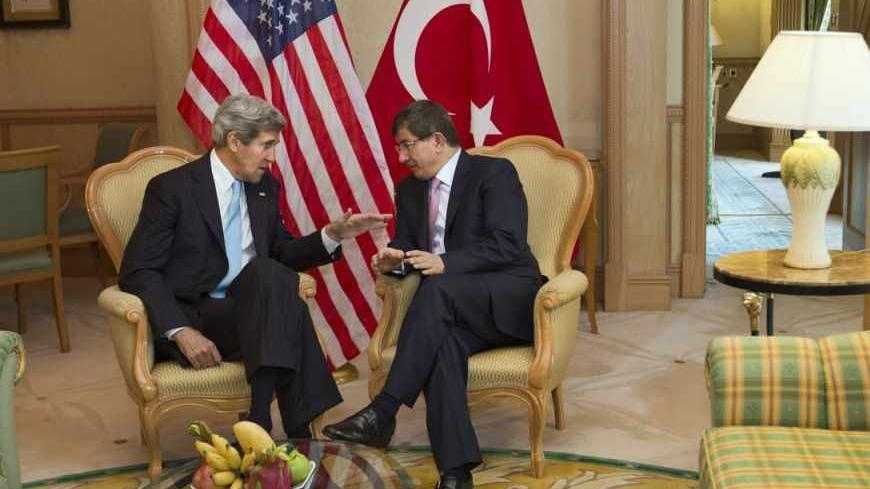 Syrian Deputy Foreign Minister Faisal al-Mekdad, in an interview this week with The Wall Street Journal, warned Turkey, Israel and Jordan about participating in an attack on Syria.

Mekdad said that Iran and Russia are behind Syria in the event of a US strike, adding: “We are being supplied until this minute with Russian arms to defend ourselves.”

A possible Syrian retaliation against US allies would put the Obama administration right back on the spot about its role in the Syria war. Former CIA Director Michael Hayden told CNN, “you can’t believe this is one and done,” despite the US interest in keeping the strike ‘limited.’

The New York Times reported last week that US President Barack Obama had directed the White House for an expanded list of targets in Syria. According to the Times, the strikes, which could include bombers as well as missiles, “would be aimed not at the chemical stockpiles themselves — risking a potential catastrophe — but rather the military units that have stored and prepared the chemical weapons and carried the attacks against Syrian rebels, as well as the headquarters overseeing the effort, and the rockets and artillery that have launched the attacks.”

Perhaps muddying the question of ‘limited strike’ further is the draft resolution passed by a vote of 10-7 in the Senate Foreign Relations Committee, which included a ‘statement of policy’ introduced by Sens. John McCain, R-Ariz., and Chris Coons, D-Del., calling for “changing momentum on battlefield.”

While a “statement of policy” in a congressional resolution is not considered legally binding on the president, US Secretary of State John Kerry seemed to encourage this line of thinking in his testimony before the committee on Sept. 3, when he said that that the “downstream” effect of a US strike would redound to the benefit of opposition forces.

The latest Gallup poll reveals that 36% of Americans support a military strike on Syria and 51% oppose. Obama will speak on Tuesday [Sept. 10] about Syria.

As Semih Idiz writes, Turkey, as a consequence of an attack on Syria, could face an influx of Syrian refugees, which already number more than 500,000. Both Idiz and Kadri Gursel warn that Turkey’s deeper involvement in Syria could have domestic repercussions for Prime Minister Recep Tayyip Erdogan. A recent poll reveals that 72% of Turks oppose military intervention in Syria. Turkey was rocked by anti-government demonstrations in May 2013 in response to Erdogan’s domestic policies, as Orhan Cengiz reviews this week.

Idiz recounts two reasons why Turks may question the continued bravado of the AK party on Syria. First is the June 2012 shootdown of an F-4 reconnaissance jet over Syrian airspace, killing the two pilots. Second is the May 2013 bombing in Reyhanli, a Turkish border town, in which 53 were killed and scores wounded.

And there are Damascus’s ties to the Kurdistan Workers Party (PKK). Erdogan’s peace initiative with the PKK and overall Kurdish strategy hangs by a thread because of talk of war in Syria, as Fehim Tastekin  reports for Al-Monitor.

Andrea Glioti reports for Al-Monitor from Amuda, Syria, on the situation in Syrian Kurdistan.

The Obama administration has made a passionate case for a military strike in response to its charge that Syria used chemical weapons in an attack on Aug. 21, killing more than 1,400 people. The administration could explain more about the possible consequences of military action, including the risk of retaliation and escalation, the probable setback for the Geneva II diplomatic process, and how this all squares with the notion of a ‘limited’ strike. This column warned on Dec. 9, 2012, of the potential for Syria taking the war to Turkey. This contingency rises in probability if the US, with the assistance of Turkey, a NATO ally, takes the war to Syria.

The G-20 summit produced no progress on Syria, just as expected. Obama and Putin tried to put the best face possible on a relationship in crisis. There was no tete-a-tete of consequence on Syria. Obama made almost no headway in gathering new allies for a military strike, although he did get half of the participants at the summit to agree that a ‘strong international response’ was necessary. Fyodor Lukyanov writes from Russia:

“One remark by Putin stands out as significant: He said if there is an attack, Russia will continue to help Syria just as it is doing now, which includes military supplies. For now, this is probably just a reminder that Russia will not feel in any way constrained if the United States declares Damascus to be a center of evil. Russian experts doubt that it will be physically possible to deliver serious weaponry to Bashar al-Assad in the event of a large-scale conflict involving major powers — there would certainly be air and sea blockades in the region. Moreover, even though it opposes Washington’s actions, Russia is not interested in a direct confrontation in the form of newly delivered Russian military equipment being used to shoot at Americans ..."

Assad is not Slobodan Milosevic, and Syria is not Bosnia. First, the Serbian leader was cynical enough to freely give up anything for the sake of his own survival and power. The NATO strike was enough to make him agree to the Dayton Accords. Assad’s situation is different: He is fighting for his physical survival and trusts no one. Also, in 1995 it was not yet known what would happen after the capitulation, but now we know the fate of Milosevic, Saddam Hussein and Moammar Gadhafi. This is an incentive not to compromise, but to fight to the end.”

As Kerry testified last week of an increasingly moderate trend among Syrian rebels, referencing analysis obtained by someone under contract with a Washington-based advocacy organization for the Syrian opposition, Maaloula, the oldest Christian village in Syria, where Aramaic, the language of Jesus Christ, is still spoken, came under attack from jihadist forces, as reported by Nasser Chararah for Al-Monitor, As-Safir (translated by Al-Monitor), and international news agencies.

Al-Monitor’s Jean Aziz attended an unusual meeting of Lebanon’s Christian leaders which focused on the crisis for Syria’s Christians, who are under siege and fleeing Syria. Many fear a replay of the exodus of Iraqi Christians during the sectarian civil war in Iraq, in which Christians were targeted by jihadi terrorist groups. There remains no word on the fate of Syriac Orthodox Bishop Yohanna Ibrahim and Greek Orthodox Bishop Boulos Yazigi of Aleppo, who were kidnapped in Syria in April, reportedly by Chechen jihadists.