Putin Pleased With Lack of Consensus On Syria at G20

Those who expected no progress on Syria at the G20 summit in St. Petersburg were proven right. 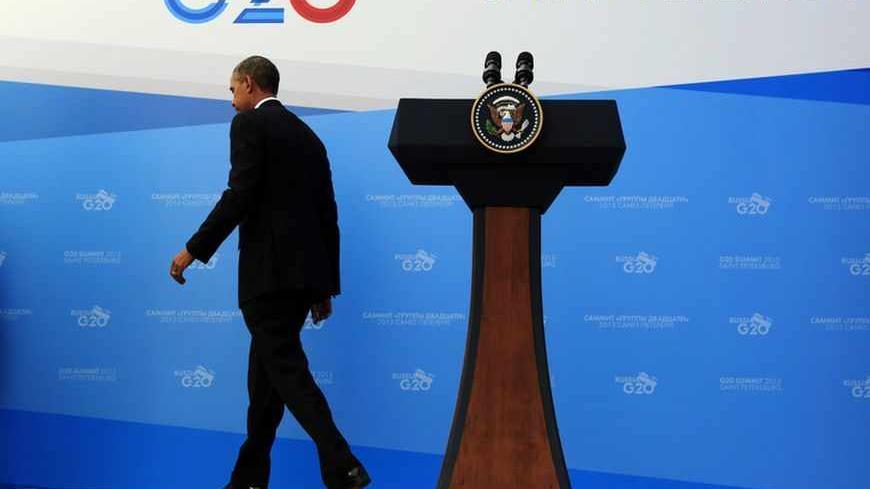 With regard to the debate over Syria, the G20 ended just as expected— with nothing. Vladimir Putin and Barack Obama ended up talking for 20 minutes, even after apparently trying, ultimately without success, to avoid each other. It could not have happened any other way.

It was obvious from the beginning that the less they talked about Syria, the more successful the meeting in St. Petersburg would be. I certainly understand the desire of UN Secretary-General Ban Ki-moon and his special envoy for Syria, Lakhdar Brahimi, to attract the world’s attention — from their perspective, this representative assembly was just about the last chance to turn back toward a more coordinated approach. In fact, however, the debate on the Syrian issue is a waste of time for one reason: The US president arrived at the event with no room to maneuver.

He publicly announced in advance that he will strike, and to step back from that threat, especially at the urging of foreign leaders, would be to acknowledge that he is powerless in the eyes of his country. No American president could afford to do this, especially Obama, who is now concerned with completing his domestic reforms and establishing his historical legacy. The action against Syria has turned into a test of the president’s relevance, obscuring the issue of what it will lead to and how it will end.

Putin kept the same tone that he has adopted in recent days — good-natured disagreement without public unpleasantness. He graciously said the brief discussion with Obama was constructive, despite the fact that they only reiterated their previous positions. At a press conference, the Russian president looked happy. He was probably pleased that the meeting had demonstrated the total lack of consensus among the 20 countries. There was no separate statement from the BRICS countries, but Russia had not pushed for this, apparently because it did not wish to exacerbate the confrontation at a meeting it was hosting. In any case, half of the participants spoke out against military action, and the other half, who signed the statement with the United States, did not directly mention the use of force, although they called for a response to the use of chemical weapons. According to Putin, in addition to the United States, only France, Turkey and Saudi Arabia spoke in favor of war at the meeting, and Britain also supported it, even though it cannot participate.

One remark by Putin stands out as significant: He said if there is an attack, Russia will continue to help Syria just as it is doing now, which includes military supplies. For now, this is probably just a reminder that Russia will not feel in any way constrained if the United States declares Damascus to be a center of evil. Russian experts doubt that it will be physically possible to deliver serious weaponry to Bashar al-Assad in the event of a large-scale conflict involving major powers — there would certainly be air and sea blockades in the region. Moreover, even though it opposes Washington’s actions, Russia is not interested in a direct confrontation in the form of newly delivered Russian military equipment being used to shoot at Americans.

In Moscow, there is little doubt that the strike will occur, but most people here believe that nothing good will come of it, including for America and Obama himself. The argument heard in Washington that a strike will supposedly be an incentive for further negotiations — that the Geneva II talks will gain new momentum if Assad is weakened and more inclined to accept the conditions — is greeted with surprise. From the Russian perspective, this is an extremely unlikely scenario.

Assad is not Slobodan Milosevic, and Syria is not Bosnia. First, the Serbian leader was cynical enough to freely give up anything for the sake of his own survival and power. The NATO strike was enough to make him agree to the Dayton Accords. Assad’s situation is different: He is fighting for his physical survival and trusts no one. Also, in 1995 it was not yet known what would happen after the capitulation, but now we know the fate of Milosevic, Saddam Hussein and Moammar Gadhafi. This is an incentive not to compromise, but to fight to the end.

The second reason is that even if a powerful strike weakens Assad, there would be no way to get the opposition to sit down at the negotiating table. This has been virtually impossible up to now due to disagreements among them, and if the prospect of military victory over a weakened regime looms before them, the opposition will no longer have any interest whatsoever in a political solution. Especially because the opposition forces fully understand that if America gets involved, considerations of national credibility will force it to do what is necessary to achieve its goal. In other words, regime change.

The G20 demonstrated one thing — that “leadership from behind” no longer works. The United States will have to take full responsibility for what happens in Syria — without international legitimacy and without allies willing to do any notable part of the work for them. Russia does not intend to oppose Washington forcefully and openly, but it will not lift a finger to help if the United States finds itself in a difficult situation after the attack.