US-Russia Diplomacy Could Be Casualty of Attack on Syria

A US attack on Syria may undermine the prospects for a Geneva II peace conference and worsen already strained ties between Washington and Moscow. 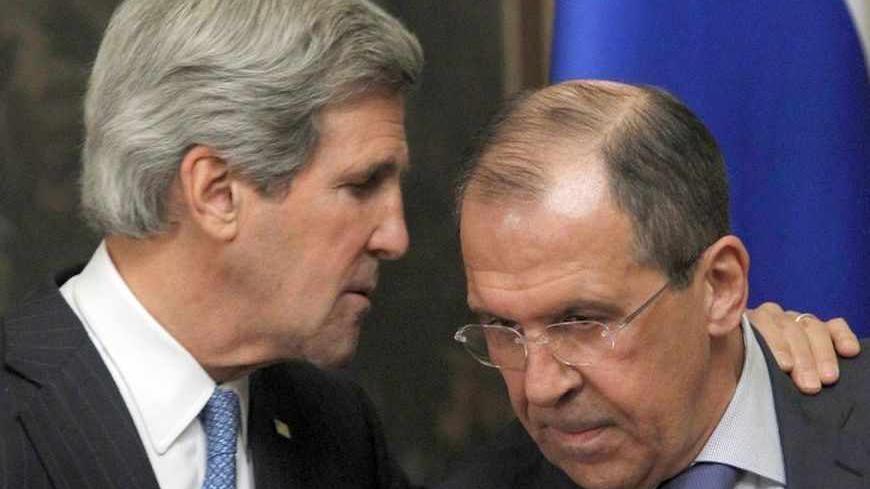 Russia's Foreign Minister Sergey Lavrov (R) and US Secretary of State John Kerry speak during a joint news conference after their meeting in Moscow, May 7, 2013. - REUTERS/Sergei Karpukhin

When four years ago Barack Obama was awarded the Nobel Peace Prize, he dedicated his laureate speech to the subject of just and unjust wars. Apparently, there are cases when the war is not just necessary, but inevitable. He must have had a second sight. As soon as he finished his “unjust” war in Iraq, he was forced to “justly” fight in Libya. Today, they haven’t left Afghanistan, yet nobody knows if their sense of justice might as well take them to the Syrian front. Oh, global leadership is a heavy burden. There is a constant need for proof of the qualities of a super-power, otherwise the rest of the flock may get out of control ...

Events in Syria and in the surrounding lands automatically bring to mind all previous incidents of international interventions since the 1990s. The mysterious use of toxic substances immediately transforms into casus belli, including the involvement of UN inspectors, yet in reality nobody could care less about their conclusions because the powers that be already know who is to blame. And the heartbreaking scenes of children dying from suffocation would get anybody onboard. And the “coalition of the volunteers” appears ready to participate in retaliation against the malicious regime.

In Moscow, hardy anyone believes that the tragedy with the toxic substances in the suburbs of Damascus is connected to the regime of Bashar al-Assad. He would have to be completely out of his mind to put himself at such risk now by using chemical weapons against the civilian population. On the other hand, the opposition, which is incapable of achieving any significant success, will benefit immensely from the scandal with the chemical weapons. However, it will be impossible to prove anything regardless of what the UN inspectors have to say. After all, their instructions were not to find out who was at fault, but rather to confirm or refute the mere fact of using the chemical weapons. Most likely, the verdict will be ambiguous and vague — "It is not yet clear, but there is room for assumption ..." It is not a coincidence that William Hague and John Kerry rushed to announce that the regime already destroyed all evidence and that, purportedly, there would be no proof; however, it does not mean a thing. A massive preparation for the act of retaliation, without waiting for the outcome of the mission, shows nothing except that the outcome is irrelevant.

What is Moscow going to do, if Western states and Arab neighbors of Syria finally launch armed action against Damascus? Naturally, it will be strongly condemned by Russia. Most likely, it will make a statement that in such circumstances, it is meaningless to rely on the “Geneva II” peace conference. In the 1990s, notwithstanding its dissatisfaction with Western politics in Yugoslavia, Russia helped twice to persuade Belgrade to withdraw — in 1995 in Bosnia (which resulted in the Dayton Accord) and, especially, in Kosovo in 1999.

In the latter case, it was the interference of Russia’s special representative, Viktor Chernomyrdin, who told Milosevic, on behalf of Boris Yeltsin, that Russia would deprive him of its support, which let NATO end its useless and unpopular air attack without moving forward with the risky inland invasion. Now, the United States should not expect any assistance from Russia in getting out of this mess and, should the conflict drag on, it would only become more expensive. If you get yourself in a mess, you should be able to get out of it yourself. Especially, given that Russian-American relations are very unpredictable because of Edward Snowden and a number of other issues.

In general, the attacks from the US Navy aircraft carriers on targets in Syria will have an inflaming effect on public opinion in Russia, akin to the scene of the NATO missiles setting Belgrade on fire in 1999. Syria is perceived as somewhat more familiar and dear than a distant and strange Libya. The common perception is that Americans are totally out of control and they bomb anybody they want to. If nobody stops them, one day they will make a landing in our own backyard. This is a very common opinion in Russia, and it appeared right after the Cold War when the use of force by NATO became routine.

Exacerbation of the conflict in Syria will cast a shadow on the meeting of the G-20 nations in St. Petersburg. Yet more fun should be had at the informal summit of the BRIC countries at the beginning of September and the meeting of the Shanghai Cooperation Organization (SCO) in mid-September. The latter meeting will be joined by Iran (the observing country), as well as China, where Vladimir Putin will have his first meeting with the new president, Hassan Rouhani. Russia will, most likely, try to bring together as many representatives of influential countries that strongly object to interference, especially by force, into somebody’s internal affairs. And the BRIC countries, SCO in particular, may as well support the enthusiasm.

The direct military assistance to the Assad regime, in the event the conflict expands, won’t be easy simply due to the limitations of physical delivery of weapons. However, closer cooperation with Iran which, no doubt, is going to support Assad to the end, may help create additional opportunities. Since Mahmoud Ahmadinejad has left, Tehran is leaning toward Moscow, which was rather harshly addressed by the former president. Iran and Russia will do their best to straighten out the power balance in Syria, which is definitely not going to benefit from the interference of NATO leading to a rapid activation of the weapons supply to the revolutionaries.

The direct involvement of foreign states in the Syrian crisis will take it to an essentially different level. One thing is the most upsetting: Something must have happened to democracy in the 21st century. Back in the day, the cunning diplomats representing the leading powers kept themselves busy with intrigues, under-the-table dealings and intense negotiations. War was legitimate, but considered as a last resort (excluding, of course, the classic aggressors focusing on military expansion).

Today, step by step, starting with Yugoslavia, a story with a poor script repeats itself. An internal conflict appeared in the country within the zone of the attention of the international community. The countries with most leverage immediately make their decisions as to who is the “bad” guy and who is the “good” guy. Thereafter, they begin to engage in fruitless diplomacy, not for the sake of mediation and peace-making, or to achieve a mutually acceptable resolution, but rather to make the “bad” guys surrender to the “good” guys. Then the “international community” heaves a heavy sigh in despair. As a rule, this is exactly the time when some ugly incident, akin to genocide, arises and leaves no room for the “last hope.” And here it comes, in a blink of an eye, a full scale war of the most powerful alliances in the history of mankind against the “bad” guys (almost always the regimes), in order to let the “good” guys win.

Let’s set aside the moral principles of justice; they do not rule in politics. Though it does look miserable. It all begins with some acute problems, usually arising from deep historical animosities between the nations and religions, which end up in a simplified black-and-white paradigm. In the end, the almighty ones make vain attempts to figure out what went wrong and why the “good” guys turned out to be so ungrateful.

And, finally, the worst news is such actions could have been explained if there were some sort of strategy behind it, some clearly defined purpose. Apparently, nothing even close to that exists. Politics has been reduced to ideological reflexes and natural instincts. The reflexes help finding the “right side of history” to find yourself in, i.e., to bend to the ever-changing circumstances and events. And instincts tell your gut to take up arms and go to war if you don’t know what else to do. A little too unpretentious for the increasingly complex and incomprehensible world of the 21st century.