The Alchemy of Syria's Conflict For US, Russia

Disagreement over culpability for the Aug. 21 Syrian chemical weapons attack would not deter a US-Russian initiative to end the war. 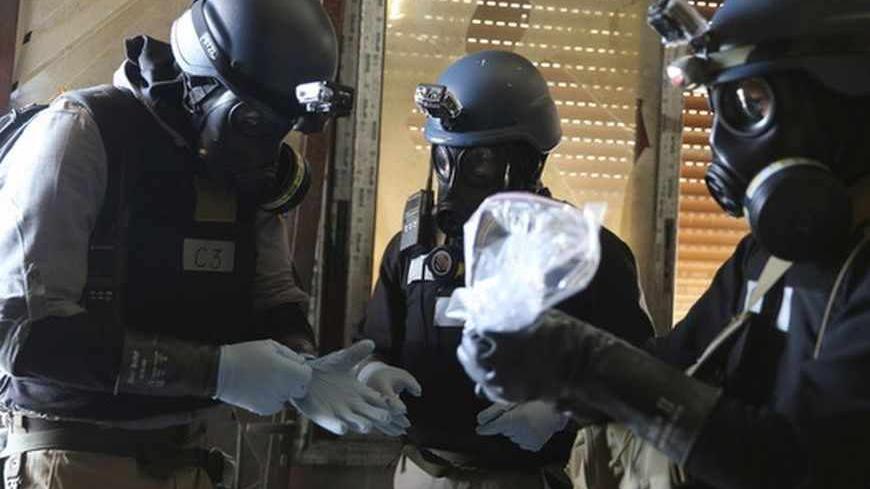 A UN chemical weapons expert, wearing a gas mask, holds a plastic bag containing samples from one of the sites of an alleged chemical weapons attack in a Damascus neighborhood, Aug. 29, 2013. - REUTERS/Mohamed Abdullah

In the 13th century, “Europe’s first alchemist,” Roger Bacon, brought to Europe expertise obtained from the Arabs — the heirs of antiquity. Seven centuries later, Great Britain pioneered the use of chemical weapons in the Middle East when General Allenby used cylinders containing asphyxiating gas in a battle against the Turks in 1917. The second incident was the use of chemical weapons by Saddam Hussein in March 1988 against the Kurdish town of Halabja. Who was the third culprit, in the recent chemical attack near Damascus?

In Russia, people do not believe it was Bashar al-Assad — and certainly not because they think he’s a nice guy. First, the use of chemical weapons is senseless from a military point of view: You can kill a lot more people with aircraft and tanks; moreover, in the two historical examples given, chemical weapons did not lead to victory for those who used them. Second, they would be like suicide to a regime waging a fierce war for survival. Russia’s official version, expressed by Vladimir Putin: The chemical attack was a provocation by extremists — the same people who recently committed the brutal massacre of Christians in the Christian holy city of Maaloula, one of only two places in the world where the locals speak the language of Christ, Aramaic. They may have been assisted by regional players who want to bring to power in Syria radicals from Jabhat al-Nusra and others like them. Incidentally, the example of the adherents of Aum Shinrikyo in Japan, who used sarin and VX gases, showed us that it is not hard to prepare homemade chemical weapons.

Alas, that’s the current version. Will the report by the UN inspectors, the conclusion of whose work Russia, at a minimum, proposes waiting for, help to resolve the dispute between Putin and that portion of the international community that supports him, on the one hand, and, on the other, the leaders of a number of Western countries, including several regional powers, who have been certain from the outset that the use of chemical weapons was the work of the Syrian president and that he therefore needs to be dealt a retaliatory strike? Many analysts believe that the inspectors will be able to establish that poison gas was used and even to determine how it was made, but that they are unlikely to be able to prove precisely who used them. Incidentally, Russia is convinced that the West has no persuasive evidence that Assad is guilty, and references to secrecy only reinforce such doubts.

There is no need to repeat Moscow’s official position that even in the presence of such evidence, military power may be used only with the approval of the UN Security Council. This position is shared by the overwhelming majority of people in the West, who are speaking out against any intervention in the Syrian conflict, which needs to be resolved, not stirred up. And indeed, what is the purpose of the strike? Russian analysts believe that the use of chemical weapons by the regime, whether imaginary or not, is only a pretext for the physical removal of Assad through surgical rocket attacks. Will that improve the situation in the country and in the region?

There are two possible outcomes: total chaos, which will immediately spread to neighboring countries, or the rise to power of vampires who will cut the throat of anyone who disagrees with them. And it is those people who are setting the agenda for the actions of the armed opposition, not some group of nice intellectuals who want to build a democracy in yet another Middle Eastern country. This being the case, in the current situation, chemical weapons are bound to fall into the “wrong hands,” at which point they will definitely be used against America and its allies in the region. The objective of destroying chemical weapons with an airstrike is unachievable. And if the goal of military action is simply to clear the way for victory by the armed opposition, this is direct interference in an internal conflict that is clearly not aimed at peacekeeping and is not allowed under international law.

The disagreements surrounding the Syrian conflict have come close to placing Russia and the United States on the verge of a new cold war. But today, Russia’s proposal is essentially Putin’s extending a hand to Obama, for whom a strike against Syria could turn out to be political suicide. Putin has confirmed that he is prepared to work constructively with the United States, even in the face of serious differences that are accompanied by sharp rhetoric on both sides.

If Moscow and Washington do manage to reach agreement, this will open the way to further constructive cooperation on Afghanistan, which we will soon need. Russia has been instrumental in Assad’s display of good judgment — not only has he agreed to “give up” the chemical weapons that Damascus has always regarded as a deterrent against Israel’s nuclear weapons, he also agreed to sign the Convention on the Prohibition of Chemical Weapons. In addition, he has agreed to disclose chemical weapons storage sites.

There are still too many questions, but an important step has been taken. Let’s be realistic: Destroying Syria’s chemical weapons will not stop the bloody civil war. It has its own “alchemy,” which by no means all of the outside players understand. But one can hope that, if the United States and Russia succeed in implementing this initiative, this will be followed by steps toward a joint diplomatic settlement of the conflict through peace talks.

Vitaly Naumkin is the President of the International Center for Strategic and Political Studies and Chair of Faculty of World Politics, Moscow State University. He is also the Director of the Institute of Oriental Studies, Russian Academy of Sciences.