Getting Syria to sign the Chemical Weapons Convention and give up its chemical weapons gives new hope for a surge in US-Russian diplomacy to end the war in Syria. 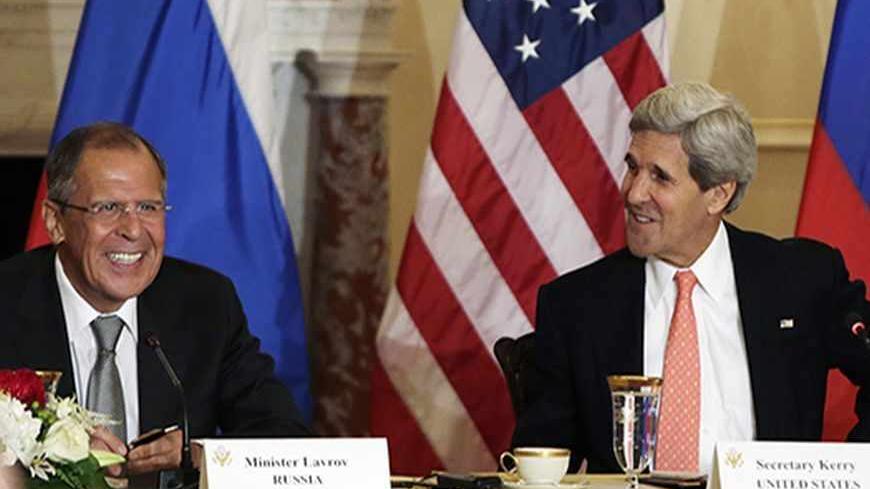 US Secretary of State John Kerry smiles with Russia's Foreign Minister Sergey Lavrov (L) at a press briefing at the State Department in Washington before a day of talks, Aug. 9, 2013. - REUTERS/Gary Cameron

Just a few days ago, Russian–US relations were seen as hopeless, but it was these two countries that were capable of coming up with an out-of-the-box idea for dealing with the Syrian problem. Russia proposed that Damascus put its chemical weapons under international control, and the Syrian government immediately agreed. At first this seemed to be an ad lib, but the notion had already come up in talks between Presidents Vladimir Putin and Barack Obama and later between Foreign Ministers Sergey Lavrov and John Kerry.

Russia and America have a good history of working together to counteract weapons of mass destruction in other countries. Back in the days of the Cold War, despite their adversarial relationship, the Soviet intelligence services informed their American colleagues of South Africa’s nuclear program, and through joint efforts, the West and the USSR successfully pressured Pretoria to discontinue the program. After the collapse of the Soviet Union, the United States helped Russia organize the work — at first on a political and diplomatic level, and then on a technical level — to move the nuclear arsenals from Ukraine, Belarus and Kazakhstan into Russian territory. In 2002, Russian and American specialists moved weapons-grade plutonium to Russia from Yugoslavia, where it had remained since the time of Josip Broz Tito’s efforts to obtain nuclear weapons. If they can reach agreement now on joint actions to neutralize Syria’s chemical weapons capability, it would be serious evidence that Moscow and Washington are still responsible leaders on the issue of dealing with weapons of mass destruction left over from the days of the Cold War.

The move involving international control over Syria’s chemical weapons refocuses the debate away from the pointless argument over who used the poison gas, since there is not and will not be incontrovertible proof. There can be no objection to the core idea of this solution. If Syria signs the Chemical Weapons Convention and gives up its dangerous arsenal, that would be an unqualified blessing. The proposal could be implemented only cooperatively, through coordinated efforts by Russia, the United States, the United Nations, countries respected for their neutrality (Sweden and Switzerland come to mind) and the Syrian government.

Ultimately, everyone saves face, which is extremely important in big-time politics. Obama and the United States would have a way to avoid an unpopular war with unpredictable results. And they could claim that it was the threat of a military strike that forced Damascus to agree to give up its chemical weapons, and therefore the American policy succeeded. Russia would finally reap the fruits of its consistent position — Bashar al-Assad could agree only to a proposal from Moscow, which he trusts. Damascus would avoid a military strike from outside by sacrificing weapons that practically cannot be used without fatal consequences.

What are the main obstacles? Removing and destroying the Syrian arsenal would be a big and risky job, requiring a long time and a predictable situation on the ground. The rebels, of course, would not want it to succeed. They are relishing the prospect of serious foreign military assistance, on the pretext of solving the chemical weapons problem, which would change the balance of power. And the opposition, primarily the more radical groups, has an incentive to interfere with the implementation of the plan to relinquish chemical weapons.

The key to the success of the plan would be to draft the right UN Security Council resolution. From Russia’s perspective, the resolution could not take the form of an ultimatum to the Syrian government, authorizing military intervention in the event of non-compliance. The resolution should establish the legal basis for the process of neutralizing chemical weapons rather than identifying those guilty of using them, especially since this is impossible to prove. In this sense, Russia’s position would still not change — throughout the Syrian crisis, Russia has prevented the Security Council from adopting documents that could be interpreted as sanctioning the use of force. This reflects both Russia’s general approach to international law — an extremely cautious attitude toward interfering in the internal affairs of sovereign states — and the lessons learned from the Libyan campaign. At the time, it was widely believed in Russia that Moscow’s goodwill in not blocking military intervention to protect the civilian population was used in order to legitimize regime change.

Of course, Moscow cannot be certain of Assad’s complete sincerity. But in this case, there is reason to believe that cooperation on chemical weapons is in his interest. First, it would actually eliminate the most obvious rationale for an attack. Second, it would allow Assad to look like a responsible head of state and burnish his image. Surely, in order for this to succeed, Russia will have to constantly remind the regime in Damascus that this is the last opportunity to avoid the use of force, and if it is lost, there will be nothing more that Moscow can do. This is also important to Russia, because only a political solution will vindicate the policy that the Kremlin has been pursuing for two and a half years.

The crucial factor for success is that, in tandem with the resolution of the chemical weapons crisis, efforts are undertaken to resolve the conflict overall. Syria’s problem is not chemical weapons, but rather the vicious conflict between various ethnic and sectarian groups in the country and throughout the Middle East. In effect, Syria needs a new model for a political system that reflects the interests of all segments of society, without excluding anyone.

For two years, the Syrian crisis has demonstrated the dysfunction of all international institutions and the powerlessness of the world community. For the first time, there is an opportunity not just to find a way out of this deadlock, but also to lay the foundation for constructive efforts to resolve similar regional conflicts, the number of which is likely to grow.

Over a year ago, on July 16, 2012, Foreign Minister Lavrov made an important statement that provides the key to understanding Russia’s position on Syria: “The model for how the international community responds to civil wars in the future will largely depend on the way the Syrian crisis is resolved.” Syria was called upon not to let the “international community” entrench the Libyan example as the model for future conflicts. From the perspective of Russian strategists, the Libyan model consists of this: In an internecine conflict, outside forces choose the “right” side and, by intervening, help it come to power. In Syria, as we can see, this approach has screeched to a halt. But this new initiative may become the prototype of a new cooperative model.