Europe keeps to the sidelines while Russia and the United States work on the Syrian conflict, while Syria’s neighbors wait quietly, holding the real leverage over the opposing sides. 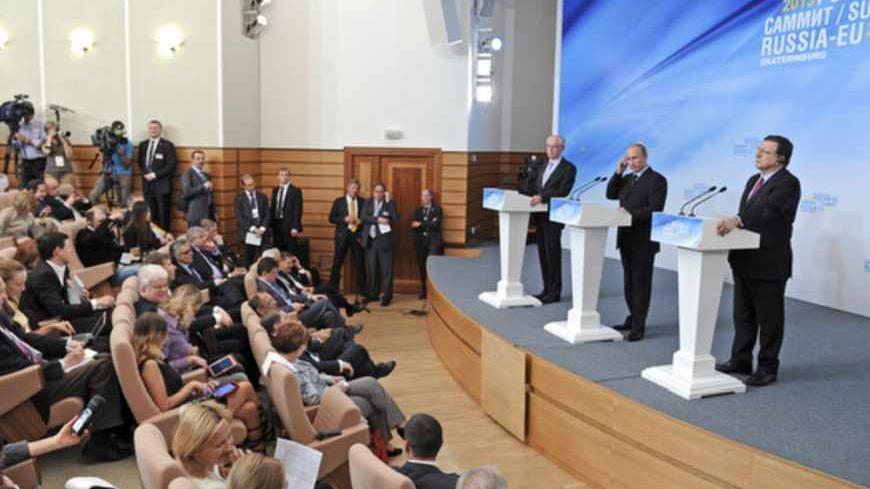 At the Russia-EU summit, the talk turned again to Syria and the prospects for a settlement, but it made little sense to have a dialogue at this particular meeting.

The European Union, by deciding to let each country decide for itself what to do about providing arms to insurgents, has demonstrated that it does not have a unified foreign policy. Consequentially, the statements by Herman Van Rompuy have no practical effect. Europe has a strange role in the Syrian conflict in general. Russia and the United States are trying to do something, and Syria’s neighbors are waiting quietly, holding the real leverage over the opposing sides. Europe as a whole is on the sidelines, while France and Britain are acting as if they have influence in the world.

Still, the meeting provided an occasion for Russian President Vladimir Putin to talk about Syria, which he does not do very often. Putin explained that Moscow has every right to provide weapons to Syrian President Bashar al-Assad, and no one can stop it. But Russia, considering the balance of power, has not yet done so. Basically, Putin left his words open to any interpretation, which is entirely consistent with the Russian president’s style.

Syria is an ideal historical case study for scholars of international relations. Especially now, when everyone is talking about a peace conference, an idea more befitting of the classical diplomacy of the 19th and early 20th centuries than the current era. It’s a banal principle: If you want peace, prepare for war. And now, in advance of this hypothetical roundtable at which all of the parties involved are supposed to get together and figure out how to get along, everyone has started rattling their sabres.

In Europe, only Britain and France actively supported removing the restrictions. The other countries expressed varying degrees of doubt about the wisdom of getting deeply involved in the civil war, but London and Paris got their way. There is a political reason for declaring a willingness to help the opposition. It means that resorting to force is still a very realistic option. In other words, if there is no agreement, there will be war until victory.

UK Foreign Minister William Hague, the main proponent of removing the embargo, says as much: that we must put pressure on the regime. This is exactly the same logic used by Russia, which will neither confirm nor deny supplying S-300 missiles and other advanced weaponry to Damascus. (Putin essentially repeated this position). It is basically said openly that the balance of power will be preserved, so there is no reason to hope that if the political process fails, the matter can be resolved through force. In principle, this tactic has its logic: The parties that must come to the negotiating table should feel the sword hanging over their heads, the nightmarish consequences of failure.

The musings coming from Washington about establishing no-fly zones over Syria are a similar phenomenon. Based on the example of Libya, everyone understands what a no-fly zone is and what it leads to. This is precisely what Russia objects to, promising (or having already delivered) anti-aircraft missile systems to make the costs of such a hypothetical operation unacceptable. In truth, the US probably does not plan to establish no-fly zones — similarly raising the stakes in order to make the parties more compliant.

Of course, this may have the opposite effect. So far, each side in the conflict has reached the same conclusion from the diplomatic game being played by the major powers. Whatever happens, they will not be abandoned or given up, so they should hunker down. Both Assad and his opponents understand that their external protectors — Russia and the West, respectively — cannot stop that support without major harm to their images.

For both Moscow and Washington, a matter of principle is at stake in Syria. Russia is standing up for secular leaders, no matter how undemocratic, and for non-intervention in an attempt to neutralize the unpleasant Libyan precedent that it had a hand in setting. And the West is torn between ideological paradigms in which there is a “popular uprising” against a “bloody tyrant” and the desire to reaffirm its model of resolving local crises that crystallized after the Cold War — we choose the “right” side in a conflict and help them come to power. So a failure to support the West's “side” would be an ideological concession that would undermine its self esteem.

The peace conferences of the past, all the way up to Yalta and Potsdam, had one big task: to divide up the world. The great powers worked their intrigues, carving out spheres of influence and exchanging interests and geographic zones. More recently, efforts like these peace conferences were associated with the Balkans — the 1995 Dayton Accords for Bosnia and the Kosovo crisis of 1999. We should remember both experiences, because they sketch out two rather likely scenarios for Syria. Dayton is the generally positive scenario. The outside players (the US and the EU, with assistance from Russia in its weakened condition at the time) brought the warring parties to the negotiating table and made them work out a model arrangement for Bosnia and Herzegovina. This is seen as an example by the optimists, who believe in the possibility that Geneva II could succeed for Syria.

The pessimists tend to recall early February 1999, when through enormous effort, a conference was convened at Rambouillet to find a peaceful resolution to the conflict in Kosovo. But the desired result was not achieved, and mutual tensions only escalated. The Kosovo Liberation Army, feeling the support of NATO behind it, was determined to win a military victory, while Belgrade could not entertain the thought of sharing power with “terrorists.” Still, the conference ended in a tie, without an overt rupture in relations. Subsequently, however, the position of the intermediaries (which the NATO countries dominated) quickly became much more inflexible, and Yugoslavia was basically given an ultimatum and told that failure to comply with its terms would lead to the start of a military campaign by the allies six weeks after the beginning of peace negotiations in France. There is no direct comparison to Syria because so many facts are specific to the situation, but the scenario of rapid escalation if the conference does not produce a breakthrough (which is impossible) is entirely realistic.

Now, of course, Russia plays a different role. In 1999, Moscow also actively protested but did not actively resist. It had only enough fight in it to make the strategically meaningless but symbolically important move on Pristina after everything had already been resolved and Belgrade had capitulated. Today, the Kremlin makes it clear that it will maintain the balance of power and will not allow a victory march against its protégé.

There is a fundamental difference between the Syrian situation and everything that came before, including the events in Yugoslavia. When they were engineering peace processes and getting involved in local conflicts and situations, the major countries were always pursuing their own specific interests and had a clear vision of their advantage — and usually their goals. In classical times this was obvious, but even in the late 1990s the mechanism was similar. The Western European countries, with the active support of the US, changed the strategic landscape of Europe to fit with the notions that dominated after the Cold War. Then-president Slobodan Milosevic’s Yugoslavia was a clear obstacle on that path.

Apart from status issues and ideological interpretations, it is impossible to understand what direct and specific interests the US, Europe and Russia have in Syria. Expanding a sphere of influence into today’s Middle East is a utopian idea. All outside powers are stumbling to find the right reaction to things that have already happened and to adapt to the realities that are changing without regard to their will and desire, not to mention strategy. Notably, those with real interests — the neighboring countries from Iran to Saudi Arabia and Qatar — are not talking about a conference. They are not saying much at all. Yet ultimately, the ability of the warring parties to reach an agreement depends on them.

There was a time when the games played by the major countries were inextricably intertwined with the small-time intrigues of local actors, but the big games were the primary drivers of events. Now it is the opposite. The local processes follow their own logic, and the “majors” are involved somewhere on a parallel plane, with those doing the leading and those being led constantly changing places.

Boris Pasternak, one of the greatest Russian poets of the 20th century, wrote in his most popular poem about the value of modesty, in lines that have become an aphorism in Russia: “But you yourself must not distinguish your victory from your defeat.” In the attempt to resolve the Syrian conflict, all of the outside forces should take consolation from this thought, because it is impossible to distinguish victory from defeat there.