Al-Monitor’s analysis and coverage of a possible US military strike on Syria. 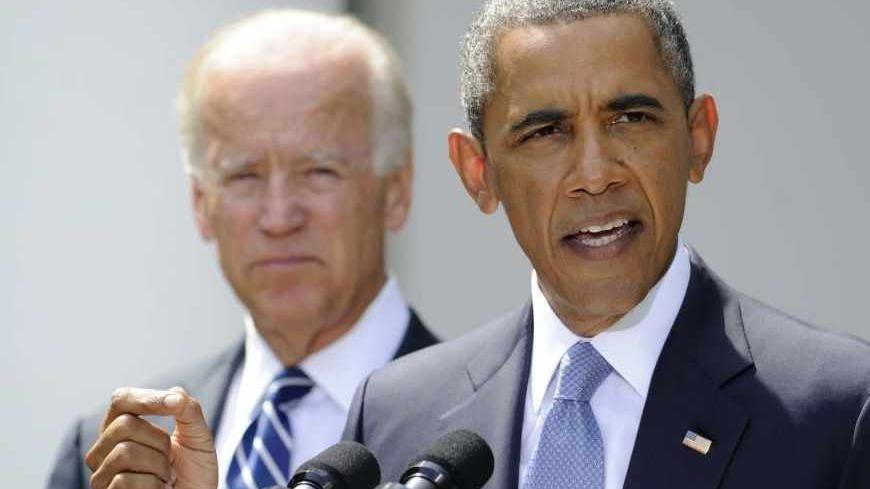 President Barack Obama speaks about Syria next to Vice President Joe Biden (L) at the Rose Garden of the White House, Aug. 31, 2013, in Washington. Obama said on Saturday he had decided the United States should strike Syrian government targets in response to a deadly chemical weapons attack, but said he would seek a congressional vote for any military action. - REUTERS/Mike Theiler

US President Barack Obama today [Aug. 31] said he would seek congressional authorization to pursue a limited military strike on Syria.

The announcement came as a surprise for those who were expecting military action over the US Labor Day holiday weekend.

The congressional debate buys time for the UN chemical weapons inspection team to present its report, and for the administration to further make its case to a wary Congress, at the UN, at the G-20 summit, which Obama will attend in St. Petersburg Sept. 5-6, and, perhaps, to test Iran’s willingness to play a constructive role in seeking a political settlement in Syria.

The president’s decision reflects an awareness of polls indicating Americans mostly want to stay out of the armed conflict in Syria, although there seems to be support for limited military action to deter chemical weapons use.

Rep. Eliot Engel of New York, ranking Democrat on the House Foreign Affairs Committee, has been a champion of limited military action against Syria and will have a leading role in the congressional debate. Engel told Al-Monitor on Aug. 2, “We can, I am convinced, send cruise missiles into Syria and destroy the runways of the air bases, the airports that [President Bashar al-] Assad’s people use to terrorize civilians. We could destroy those and we could put a very big crimp in Assad’s ability to use them. That doesn’t really involve any risk because the cruise missiles would not be launched from Syria proper.” (Click here for Al-Monitor interviews with House leaders).

“Anybody” and red lines

In an interview with the "PBS Newshour" on Aug. 28, Obama said that he is willing to work with “anybody” to resolve the Syria conflict.

“Although I have called for Assad to leave and make sure that we got a transitional government that could be inclusive in Syria, what I’ve also concluded is that direct military engagement, involvement in the civil war in Syria, would not help the situation on the ground,” Obama said, adding, “We’re prepared to work with anybody — the Russians and others — to try to bring the parties together to resolve the conflict.”

“Anybody” just might mean Iran, which holds more influence in Syria than any other country. Iran’s permanent representative to the United Nations, Mohammad Khazaee, welcomed the idea of the Geneva II conference on Syria in an interview with Al-Monitor on May 24.

A US-Iran diplomatic channel would be more decisive in ending the war and preventing further massacres than a limited bombing campaign against select military targets.

The president’s remarks about dealing with “anybody” came one day after UN Undersecretary General for Political Affairs Jeffrey Feltman, a former US assistant secretary of state for near eastern affairs, discussed chemical weapons and Iran’s role in a political solution in Syria with Iranian Foreign Minister Javad Zarif in Tehran, as reported for Al-Monitor by Ali Hashem.

On Aug. 30, US Secretary of State John Kerry recognized Iran for being a signatory to the Chemical Weapons Convention in his speech outlining Syrian culpability in the use of chemical weapons on Aug. 21, which killed more than 1,400 people in Damascus suburbs.

This column, on May 5, referred to a shared “red line” on chemical weapons as a potential bridge to a US-Iran dialogue on Syria.

Iran’s leaders have predictably warned of dire consequences in the event of a US military strike, but Meir Javedanfar, writing in Al-Monitor, does not expect the Iranian government to take any retaliatory action if the US attacks Syria, given the bigger stakes of trying to reach a deal with the US and its allies in the nuclear talks. Ali Hashem explains this week that Iran saying it will do what is “appropriate” conveys realpolitik behind the rhetoric. Arron Murat and Hossein Mossavian, former spokesman for Iran’s nuclear negotiators, both write that Syria can be an opportunity for US-Iran engagement, perhaps linked to progress in the nuclear talks.

Diplomacy on Syria would benefit from a reset with Russia in order that Geneva II does not become a casualty of a looming strike on Syria, as Fyodor Lukyanov warned. Bilateral ties have been set back by the defection of Edward Snowden and other issues. Obama will see Russian Federation President Vladimir Putin at the G-20 summit in St. Petersburg Sept. 5-6, although there are as yet no plans for them to meet separately.

Unless the US commits all-out to regime change in Syria, which Obama said he has no intention of doing, a strategy to end the war necessarily involves diplomacy with adversaries as well as allies. The NATO air campaigns in Bosnia and Kosovo, often and rightly considered successes for US policy, included intensive direct diplomacy with all parties, including Yugoslav dictator and war criminal Slobodan Milosevic. You need a cease-fire by all sides to stop the killing. It was the Yugoslav government, after the Kosovo war, which arrested Milosevic and transferred him to the International Criminal Tribunal of the former Yugoslavia. There should be several lessons here for Syria.

Terrorism in Syria, Iraq, Lebanon and maybe even Egypt would likely continue to surge even after a US strike absent a diplomatic strategy to end the war and address the now-rejuvenated terrorist threat in Syria.

It is the continuation of the war, the destruction of Syria, the rise of jihadists, the spread of terrorism to Syria’s neighbors and the waves of refugees that are the threats to US interests, and these are best handled by an immediate cease-fire and the start of negotiations — not by taking sides in the war.

The administration could seize the opportunity of the congressional debate to lay out the endgame in Syria with some clear benchmarks, beyond missile strikes in response to chemical weapons use, including: a channel with Iran; calling out both the Assad regime and the opposition, and especially their respective regional patrons, to enact a cease-fire immediately; urgently convening the Geneva II conference to include both the Syrian government and non-jihadist opposition forces, no exceptions; and a crackdown and some accountability on those US allies which directly or indirectly support the flow of jihadists to Syria.

In the meantime, Aleppo’s Christian community is under siege. Edward Dark (a pseudonym) reports from Aleppo that Christians are either fighting for their lives or fleeing from areas “liberated” by Islamist forces. Dark writes that Syrian Christians are on track to suffer the same fate as Iraqi Christians.  This is a direct consequence of the war, and a terrible blow to Syria’s cultural mosaic.

Lebanon, already paralyzed by its broken, factional politics, is a ticking time bomb.  Both Jean Aziz and Sami Nader write this week that the country will pay an even higher price from the fallout from any military strike.

Ben Caspit reports from Jerusalem that Israel, too, is on edge, somewhat bewildered by the US approach to Syria and keeping a wary eye on Iran: “Iran is the major dynamo generating the events in the Middle East. Through an Israeli prism, the war that’s raging in Syria is just a trailer for what will follow later. Israel keeps mentioning the American invasion of Iraq as the watershed moment when the Iranians decided to suspend the military program of their nuclear weapons groups. By contrast, what’s happening now — when the whole world is running around bickering over an airstrike in Syria — will only embolden the ayatollahs and their readiness to continue full throttle their plan to acquire nuclear military capability.”

Caspit is spot on: Iran, more than any other power in the region, is the “dynamo” and broker of either war or peace.  It is time to put Iranian President Hassan Rouhani to the test and bring the Syria war to a close.