The prolonged American debates over whether to strike Syria have weakened its deterrence, rendering any such attack inefficient, and while all watch Damascus, the real threat lurks in Tehran. 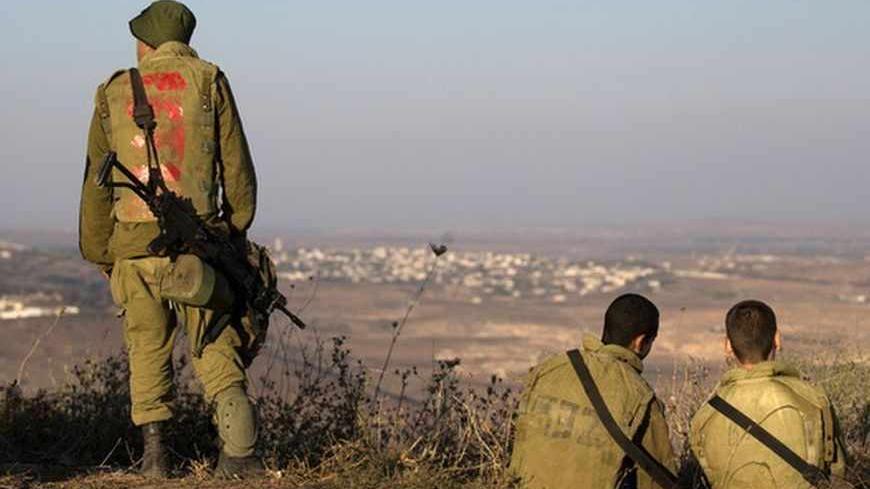 Israeli soldiers look across the border to Syria in the Israeli-occupied Golan Heights, Aug. 30, 2013. - REUTERS/Ronen Zvulun

“For the time being,” says a high-ranking Israeli defense official, “the damage done by all the talk about a strike on Syria considerably outweighs its benefits, if and when such a strike does take place.”

The assessment in Israel is that this farce will end with the firing of a few dozen or a few hundred Tomahawk missiles at strategic objectives of the Syrian regime. For two days, (Aug. 28-29), the Israeli Defense Forces (IDF) have been taking into account the possibility that nothing will happen in the end. Some among Israel’s top brass would like to keep it this way for the present time, hoping that US President Barack Obama will somehow be able to get off his high horse without falling on his head.

In view of the fact that Syrian President Bashar al-Assad has received a fantastically long warning of several days about a strike, the targets will probably be empty. The strike would raise a bit of dust and produce some great photos, though. It will allow Obama to deliver a sanctimonious speech, and routine life in Syria will resume in no time. Or maybe this should be corrected to “routine death.”

If this were to be the case, it would have been better not to embark on this adventure to begin with, Israeli officials maintain. Given that the main objective of the likely American move is deterrence, it will be totally missed if Assad comes off so easily in the wake of an embarrassing international diplomatic commotion that consisted of a white night at the British parliament, marathon persuasion campaigns at Congress in Washington, Iranian war mongering and Syrian threats and incitement.

An Israeli official says, “If at the end of all of this, Assad is dealt a blow that looks more like a caress, what will happen is that American and Western deterrence in the region will totally collapse, which will be duly and carefully noted in Tehran. While everyone has their gaze fixed on Damascus, the real threat lurks in Tehran. In this state of affairs, it’s really better not to do anything.”

Given the current situation, quite a few Israeli officials would prefer to see American deterrence remain ambiguous and looming — one which remains to be proven. It’s better, they say, than what’s going on today, when it turns out that Obama is unable to make a quick, quiet decision and carry it out — without all this chattiness, diplomacy, vacillation, and interviews. If hardly anything happens in the end, Israeli officials contend, this will be tantamount to the Americans giving Assad a green light to continue butchering his own people and a free pass for Iran to pursue its nuclear race. After all, there is no boss in the arena, there is no responsible adult on the ground, there is no doctor in the room and there is no sheriff in the “Wild Mideast.”

It seems that in the end, Western leaders will come to the realization that in the current state of affairs in the Middle East, we can forget all about the principles of justice, morality, democracy and what’s right and what’s wrong. The dilemmas between the various scenarios and options in the Middle East are simple ones. It’s a choice between terrible alternatives. If we ignore all the background chatter and assess what will happen if Assad remains in power or what will happen if he is forced to disappear in one way or another, we’ll arrive at the conclusion that the difference between the two is negligible. Either way, Syrians will continue to be killed in large numbers, just as is the case in Iraq (although under deposed president Saddam Hussein, Iraq was calmer, better and safer for its citizens than after his ouster), Libya, Egypt and elsewhere.

Obama is learning firsthand what life is like outside air-conditioned auditoriums, what the reality is behind the eloquent speeches, in places where there are no teleprompters.

In 1998, another American Democratic president, Bill Clinton, had to deliver a deterring blow to Iraq. Unlike Obama, Clinton did not vacillate much. He picked up the phone and talked to a few Middle Eastern leaders and then instructed the US military to launch Operation Desert Fox with Tomahawk missiles and air sorties. Although the Americans tried to drive the message home, Saddam nonetheless found it hard to understand. Later, when George W. Bush became president, the ground invasion took place, and we all know how that ended. The truth of the matter is that we are a long way away from the end.

Israel looks at these events with mixed emotions. If this is Obama’s and the West’s decision-making and execution capabilities, officials in Jerusalem have been saying, it would have been better to try to reach a diplomatic solution (just as Al-Monitor’s Andrew Parasiliti wrote in Time Aug. 29.)

If that were the case, military deterrence would not sustain any damage, continuing to loom without being exposed publicly as unreal. It would be better if the tiger continued to lie in its den, making growling noises instead of coming out for everyone to realize it’s actually a kitten.

Israel is closely monitoring the events in Syria, although its rapt attention is still directed at Tehran. Iran is the major dynamo generating the events in the Middle East. Through an Israeli prism, the war that’s raging in Syria is just a trailer for what will follow later. Israel keeps mentioning the American invasion of Iraq as the watershed moment when the Iranians decided to suspend the military program of their nuclear weapons groups. By contrast, what’s happening now — when the whole world is running around bickering over an airstrike in Syria — will only embolden the ayatollahs and their readiness to continue full throttle their plan to acquire nuclear military capability.

Meanwhile, Israel is also muddled. Its chief of staff, Lt.-Gen. Benny Gantz, talks to his American counterpart, US Chairman of the Joint Chiefs of Staff Gen. Martin Dempsey, almost on a daily basis. In this equation, Israel remains the secret variable, trying to stay away as much as possible, albeit not very successfully.

In order to brace for any eventuality, Israelis are trying to elicit any shred of information from the Americans about their intentions, including timetables and the intensity of the event. Israel’s intelligence array is taut to capacity in a bid to identify signs of Syrian preparations to retaliate against it. In the past week, Israeli Prime Minister Benjamin Netanyahu ratcheted up his implied threats, discernible only by analyzing each word individually.

If earlier this week, on Aug. 29, he said that a Syrian response against Israel would prompt the IDF to react with “great force,” he had already talked about “very great force.” Israel has made it clear that the use of chemical weapons against the Jewish people is a true red line — an Israeli one, not American. This is a casus belli which means an Armageddon, Assad’s physical elimination and a genuine deterring blow that would reverberate across the region for many years to come.

The threat is clear and significant, and the only question that remains is whether Jerusalem would have the right measure of courage, adventurism and willingness to follow through.

Israel projects emotional calmness and readiness, deploying its Iron Dome missile-defense batteries — on Friday, Aug. 30, one was deployed in the Tel Aviv region — all its Arrow anti-ballistic missile batteries and all the special intelligence devices, hoping this will blow over quietly.

On Sept. 4, Israelis will be celebrating Rosh Hashana, the Jewish new year. We already had a major war on Yom Kippur, the Day of Atonement. There has never been one on Rosh Hashanah, and nobody wants there to be one. This is especially true in view of the fact that budgetary constraints and certain priorities have brought Israel in 2013 to the point at which 40% of its citizens do not have gas masks against chemical weapons.

The images that were broadcast from Damascus triggered something primordial and hidden in the Israeli DNA. Huge lines are seen in front of gas-mask distribution stations while the prevailing consensus — from the far right to the surreal left — is, “Well, Obama, make up your mind whether to do it or not, and let’s be done with it already.”