An operation against Syria carries the potential for escalation that could lead to Armageddon, yet the United States must make it clear: Using weapons of mass destruction is not an option. 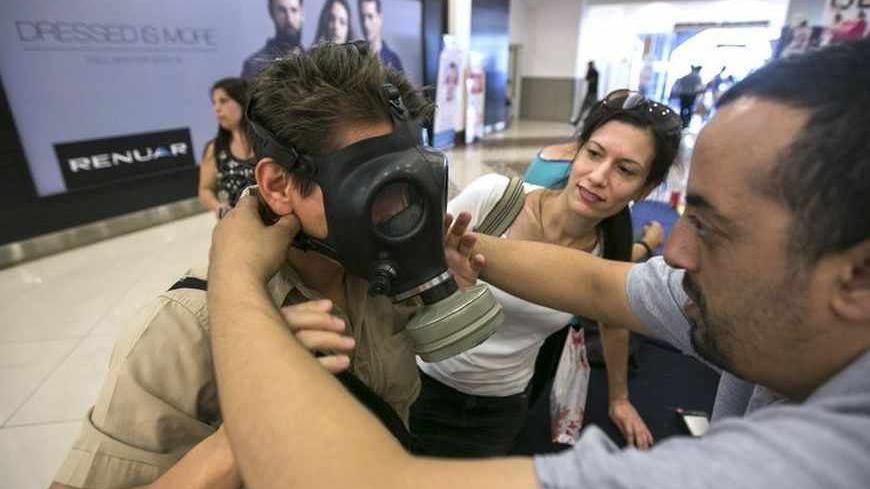 An Israeli postal service employee shows a man how to adjust a gas mask at a distribution point at a shopping mall in the West Bank Jewish settlement of Maale Adumim near Jerusalem, Aug. 26, 2013. Thousands of Israelis lined up for gas masks at nationwide distribution centers fearing a deadly chemical weapons attack in Syria may wind up ensnaring their own nation in conflict, officials and analysts said on Monday. - REUTERS/Baz Ratner

While the Syrian dilemma touches on many issues such as security, region, religion, politics and diplomacy, it is, first and foremost, a moral one. Here, in Israel, it has come into sharper focus after seeing the photos of the atrocities broadcast from Damascus and the rows upon rows of bodies shrouded in white sheets.

Israel is a nation that rose from the ashes of the Holocaust. The people in Israel are the only people in the modern era against which an explicit order of extermination was issued and partially carried out. Six million Jews were exterminated during World War II, most of whom were killed by gassing. No Israeli can remain indifferent knowing that within a 30-minute drive from the Golan Heights such horrific sights are taking place again.

When it comes to bloodshed in the Arab world, the prevailing Israeli mindset ranges from indifference to schadenfreude, sharing the spirit of the wishes the late Prime Minister Menachem Begin extended when the Iran-Iraq war broke out (“I wish both sides success”). But this attitude changes completely when it comes to gassing.

From a moral standpoint, Israel cannot stand on the sidelines. It must adopt a clear stance on this issue. Despite the fact that an American strike on Syria could very well open the gates of hell on Israel, it can neither run away nor hide. Knowing a thing or two about the regional poker game, Syrian President Bashar al-Assad has already announced that he would hold Israel accountable for any strike against his country. On  Aug. 26, he was joined by Iranian officials who made threats in a similar vein. Knowing also a thing or two about wars of nerves, the Iranians dispatched a member of parliament, Hussein Sheik-Hulisalam, to make these threats so in the event that these turn out to be empty, he could be disavowed. Yet based on Middle East experience, it would be well advised to listen to those who make these threats. Usually, they materialize. A chemical warhead mounted on a missile during the first act could very well explode amid a civilian population during the third act.

Israel, the United States and other Western intelligence agencies are fully synched in terms of Assad’s stockpiles of chemical weapons. Immense resources have been invested in recent years to monitor these weapons, particularly since the rebellion in Syria broke out.

A few months ago, on April 23, when Brig. Gen. Itai Brun, the director of Military Intelligence Research Division of the Israel Defense Forces, was the first to declare that the Syrian regime had used chemical weapons against the insurgents, almost everyone was taken by surprise. Brun consulted with no one before coming out with this statement, thinking that such an event could not go unreported. However, what he did not realize was how that statement would embarrass the US in general and the West in particular. Since then everyone is on the same page.

Back then, the use of the chemical weapons was sporadic, unprofessional and undeadly. It was of sorts a declaration of intent. Later, according to Western intelligence agencies, Assad pulled a few make-believe and hold-me-back stunts when his troops mounted chemical warheads on missiles so that this action would be picked up by American surveillance satellites. He wanted to relay a message and make sure it reached the desired destination. The Syrian regime will fight tooth and nail "to the last drop of blood," and Assad has no intention of giving up.

And then last week’s operation took place. Various intelligence agencies across the globe are trying to figure out what crossed Assad’s mind when he gave the order (clearly the use of such lethal Judgment Day weapons must originate from the presidential palace). Have his recent successes blunted his caution and discretion, or conversely, has his inability to banish the insurgents from Damascus prompted him, in his great despair, to drive them out by using non-conventional means? Either way, this is a fait accompli, which prompted utter shock and dismay that’s reverberating across the free world. It took US President Barack Obama a day or two to realize that this time around restraint was not an option.

The American dilemma is even more complicated than Israel’s. “It turns out,” says a seasoned Israeli diplomat who knows Americans intimately, “that Obama who hails from the Midwest is unable to adjust to the Mideast.”

The American president received the Nobel Peace Prize during his first term. Yet he did not bring peace. The world could deteriorate into war during his second term. A military action in Syria has the destructive potential of causing the situation to cascade into an Armageddon in the Middle East and even beyond. If Hezbollah retaliates by firing rockets at Israel (on Tehran’s orders), and should Assad himself launch missiles at Israel (he is unlikely to dare fire chemical missiles or else he knows that he and his regime are doomed), Israel will have to react forcefully. Iran won’t take it lying down, consequently dragging the Gulf countries and possibly Saudi Arabia into the bedlam. And who knows what this will elicit in Jordan, Egypt and Lebanon. And it is only at this point that we’re getting to the issue of the Russian and Chinese response.

Theoretically, therefore, it is possible that the likely American reaction in Syria (and following  Secretary of State John Kerry’s statement  Aug. 26, a reaction is clearly forthcoming) will produce more damage than good.

But there are, on the other hand, long-term strategic interests at stake. If the United States turns a blind eye to what happened in Syria, the Americans will in effect be giving the Iranians a green light to continue their stampede toward a bomb while also permitting the North Koreans to continue to stick their tongue out at the world. Furthermore, all the dangerous regimes across the globe might seriously consider using weapons of mass destruction as a legitimate, perhaps even a rational, means in various struggles.

The US must make it clear, right here and right now, that using weapons of mass destruction — be they nuclear, biological or chemical — is not an option. There is no such thing as a rational use of such weapons. The US must take action because the world has no other responsible adult at this time. Former President George W. Bush passed the baton of the world’s sheriff to Barack Obama. Yet right now there is the immediate and present danger that Obama has replaced this job with being the village buffoon. If he blinks again, he’ll be considered chopped liver.

The Americans also need to carry out this operation because of Tehran, which continues to closely scrutinize US movements. Obama must not forget that the only time the Iranians suspended the military nuclear program of their “weapons group” occurred on the eve of the American invasion of Iraq. This does not go to say that an invasion somewhere is called for; not at all. Yet what it does say is that the Iranians appreciate the use of force. Only demonstrable use of force might dissuade them from pursuing their plans.

Hence, President Obama, Secretary of Defense Chuck Hagel, National Security Adviser Susan Rice, Chairman of the Joint Chiefs of Staff Gen. Martin Dempsey and Kerry face the daunting task of allowing the Americans to convey a clear message without, at the same time, throwing the baby out with the bathwater. In this connection, intense meetings are being held by all the Western intelligence agencies, NATO and Western militaries, as well as with various Arab states and the US and its allies. (According to reports, such meetings have also taken place in Jordan.)

There are quite a few contingency plans, including intelligence for operations such as the one that’s required right now. If the Americans were to consult with Israel, here is the advice that they would receive: This has to be a short, accurate aerial operation. For a limited time, it might have to be backed on the ground by special forces operations. Its objective should be to deal a serious blow to Syria’s chemical capability, possibly even its total destruction. That’s doable and not at a stiff price. What’s needed is a decision and then its execution. This will convey the right message and also free the region from at least one worry.

And after having said all of this, a word of caution: The Americans already helped insurgents to get rid of a cruel, hostile occupying regime. It happened in Afghanistan when the Americans (and, according to foreign sources, admittedly Israelis too) armed and trained the mujahedeen. Ultimately victory was secured. The Soviets were expelled from Afghanistan, which fell into the hands of the Taliban. And now? Now the Americans, with the rest of the world, miss the Soviets. That is liable to happen in Syria too.

Assad lost the little legitimacy he had left when he heinously used weapons of mass destruction. The problem is that we might end up missing him when his replacement arrives. That’s the trouble in the Mideast.