Israel believes that its airstrikes on Damascus are being considered with concern in Iran, writes Ben Caspit. 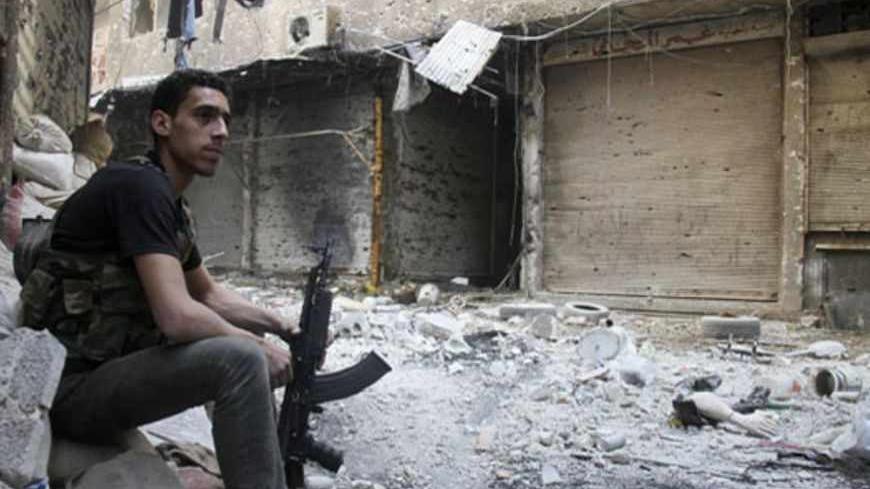 A Free Syrian Army fighter sits on sandbags in the refugee camp of Yarmouk, near Damascus, May 5, 2013. - REUTERS/Ward Al-Keswani

Whenever the situation in the Middle East looks like it can’t get any worse, it gets worse. Syria has been embroiled in a bloody civil war for two years now, and over the past year a significant number of global terror groups and ad hoc al-Qaeda cells have jumped into the fray. At the same time, Hezbollah was drawn into the struggle and is sending in hundreds of its troops into Syria. Iran is also sending in Islamic Revolution Guards Corps [IRGC] regiments. Turkey is involved, and the fire is spreading to all corners, while in Jordan they are trying to establish a buffer zone for refugees. The Golan Heights is catching ricochets, and the entire region is seething. And now, even Israel is joining the action.

So let’s set a few things straight: A few hints appeared in the previous article I published in Al-Monitor: the first, including an unequivocal statement by a high-ranking Israeli military official, according to which Syrian President Bashar al-Assad’s regime still maintained full control over his chemical weapons. There is no threat to them. According to assessments, Hezbollah Secretary General Hassan Nasrallah does not want chemical weapons, as he knows they will only spell trouble for him because Israel would never tolerate weapons of mass destruction in the hands of Hezbollah’s leader. However, Israel’s highest ranking defense officials have made it clear that Israel would also stop “game-changing” weapons from making their way to Hezbollah. And not only chemical weapons. The Israeli airstrikes, according to Western Intelligence sources, around Damascus over the weekend were proof that Israel means business.

As far as Israel is concerned, three types of Syrian weapons constitute casus belli, game changers, the types Israel will never allow to flow to Hezbollah. And that's without addressing the issue of chemical weapons. According to experienced military sources, these are high precision, lethal Yakhont missiles that are able to strike ships or marine platforms from a distance of 300 km or farther. Missiles such as these would put the gas excavations in Israel's economic waters within strike range. The second type are SA17 anti-aircraft missiles, which are considered game changers in terms of the Israeli air force's freedom of operation. The third are the weapons hit Damascus in recent days.

And that’s exactly what happened. According to Western intelligence sources, the targets that were bombed twice (during the night between last Thursday and Friday, May 2, and the night between Saturday and Sunday this week, May 4) were Fateh-110 missiles depots and their solid fuel depots. Why are they considered “game changers”? Because they are far more precise than the old Scuds and Nasrallah’s rockets, and because they are propelled by solid fuel and launched from mobile launchers. In other words: precision is the critical element here. If Nasrallah gets missiles with a dispersion range of only a few dozen meters, like the Fateh missiles, it means that he would be able to threaten the Israeli air forces’ airports and other strategic facilities. Israel cannot allow itself to be in that position. Another, even more serious matter for the Israelis: the fact that launching Fateh missiles does not require a lengthy and complex launch process that can be seen by Israeli Unmanned Aerial Vehicles [UAVs]. Because it is equipped with solid fuel, the Fateh can be launched quickly, within a matter of minutes, from a relatively small vehicle, and strike its target with lethal precision, with a war head weighing half a ton. You can’t make predictions, you can’t shoot them down from the air. If there is such a thing as “game-changing” weapons in the match between Israel and Hezbollah, this is it.

It is believed that the operation was coordinated with the United States through a very long series of discussions between the parties, at all levels. The issue was also raised during US President Barack Obama’s visit to Jerusalem at the end of March this year. According to sources which were involved in privy to these talks, the Americans gave the nod of approval and suggested that Israel only do so when it is clear that said consignments were about to make their way to their destinations, while maintaining a “small footprint,” so that Assad is not tempted to respond or forced to respond.

The situation is quite reminiscent of the situation right before the bombing of the Syrian nuclear reactor in Deir al-Zour in the summer of 2007. According to foreign reports, Israel was responsible for the airstrike, which took place prior to the outbreak of the Syrian civil war. In operational terms, the destruction of the reactor was quick and simple. The question was how to prevent the situation from deteriorating into a full-scale war between Israel and Syria. A great deal of energy was spent then to keep a low profile, while at the same time signaling that the Israeli Defense Forces [IDF] were ready to go. Then, too, half the Israeli army was performing drills in the Golan Heights, just like last week at the end of April, when the IDF conducted a major division drill in the Golan. That said, however, there are major differences between the strategic situation then and now.

Assad today is not the stable and self-confident leader he was then. He is fighting for his life and the survival of his regime. Some people in Israel believe that Assad’s fall would be good news, while others, whose numbers have been growing, are convinced that Assad’s fall would be bad news and that we’ll miss him more than we ever dreamt we would. I tend to agree with the latter. In any event, Assad today doesn’t have the privilege of taking action because his honor was bruised, and he doesn’t really have to respond to every provocation. Israeli action against him could actually play into his hands, as someone who is trying to persuade one and all that the uprising against him is actually a Zionist conspiracy. Assad’s military position is complex, and the last thing he needs now is to get entangled with Israel. That’s the reason that the probability of an all-out war between Syria and Israel, or between Hezbollah and Israel, due to the recent airstrike near Damascus is not very high.

What does Israel get out of all of this? First of all, it has reduced the risk of transfer of missiles or “game-changing” technologies into what it believes are dangerous hands. It is not a far stretch to believe that there will be other strikes, if and when. It is not unimaginable that Israel will take advantage of the chaos to drastically reduce the potential of such technology and equipment falling into the wrong hands. Second of all, Israel has once again put on a show of military, and especially intelligence, strength. The consignments that exploded with a thundering boom in Damascus in recent days are underground, protected by thick layers of concrete. While it’s true that this is still not the Fordow site, there are very few air forces in the world that know how to crack such caches, and with such ease.

And we still haven’t mentioned the excellent and precise intelligence. I believe that in Jerusalem they assume that Tehran is looking at bombed out and burning Damascus and understanding several things. The United States is supportive, the world is silent and the sides are ready in a face-off, closer than ever to conflict. If we think about it, we are actually right in the middle of the dress rehearsal.