Israel, West Bank Quiet For Now Amid Region in Flames

Israel is surrounding itself with more fences and tightening security measures in anticipation of more violence on its borders as regional unrest continues. 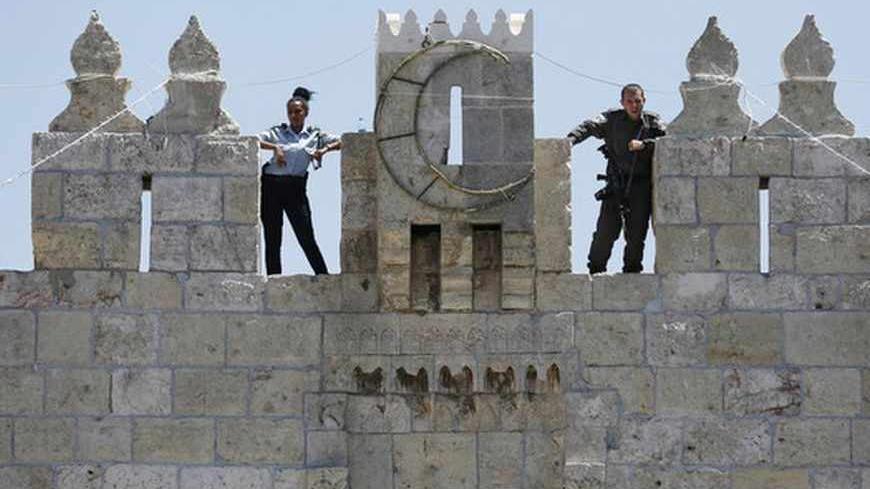 When the chips are down, it’s better to start off with the half-full glass, even if it’s much less than half full. “Look at this amazing thing,” a high-ranking Israeli military official told me on Aug. 14.

The official told me, “In the last couple of days, Egypt has seen hundreds of fatalities and thousands of casualties, and the numbers just keep rising. For a long time, Iraq has been seeing about a hundred fatalities daily. In Syria, the number of weekly fatalities ranges between 900 and 1,000. The Gaza Strip and Sinai are seething. Everybody’s killing everybody. Now Lebanon is also starting to rip apart and count bodies. And where’s the quietest place in the Middle East right now?” He answered instantly: “In our territories, in Judea and Samaria. Not long ago we saw a rise in the number of stone-throwing and Molotov-cocktail incidents, but that’s all water under the bridge. There’s total quiet. The Palestinian Authority and the Shin Bet are able to generate a perfectly calm atmosphere and reality. Terror is practically nonexistent. This quiet is almost exemplary.”

I asked him to what or to whom the Israel Defense Forces (IDF) attributes this bubble of quiet.

“It’s a combination of things,” the official told me. “First of all, there is the diplomatic negotiation. It’s much more important than what might be suggested. Secondly, a resolute, professional and thorough campaign to nip terrorism in the bud is being carried out. It’s not just us — it’s the Palestinians, too. Israel and the Palestinian Authority share a common vested interest in maintaining quiet, so they are seeing to it. There’s intelligence, and the area is under control. Besides, don’t forget that the territories went through 15 tumultuous years, the first intifada and then the second one. Everybody is worn out. People want a respite. They want to raise a family and kids quietly. In a way, this is exactly the opposite of what’s going on with our neighbors.”

But this is where the optimistic portion of this article ends, because apart from this small island of (relative) quiet in Israel and the West Bank, the rest is going up in flames. A few weeks ago on June 27, Israel’s Chief of Staff Lt. Gen. Benny Gantz said, “Fire is starting to lick the robe of [Hezbollah’s Secretary-General Hassan] Nasrallah." Little did Gantz know how quickly his prediction would come true.

Israel’s defense establishment asserts that Hezbollah is at a historic and unprecedented nadir. Until not long ago, it boasted the title of “Lebanon’s defender” against Israeli aggression and other enemies, real or virtual. Now, on orders from Tehran, Hezbollah is not only the defender of Lebanon but also the defender of Syria, or to be more precise, the defender of the Iranian-Shiite axis. This revelation does not bode well back home for Nasrallah. Car bombs started blowing up in his own back yard in large numbers. The fire is poised to move from the robe to the body, and maybe all the way up to the head. That’s what people in Israel are saying.

Hezbollah involvement in President Bashar al-Assad’s war of survival started with a trickle of military experts, then moved to a faint stream of a few dozen combatants and at this point has reached the order of 2,500 to 4,000 combatants. This makes up a large portion of the organization’s enlisted army, which is now up to its neck in the bloody war in Syria.

The battle in al-Qusair, which was conducted by Hezbollah (admittedly, with remarkable success), heralded the organization’s involvement in other regions in Syria: Homs, the southern border close to Jordan, the coastal area and many other parts. That’s when the body bags started piling up.

Initially, Nasrallah furtively gave his fighters contemptible and disrespectful burials. At one point, he was no longer able to go on with this. Now the bodies are flowing in greater numbers to Beirut. Western intelligence agencies estimate that to date, Hezbollah has sustained approximately 200 to 300 fatalities as well as many hundreds of wounded fighters. These are very high numbers, which — if prorated to Israel — are tantamount to thousands of fatalities and tens of thousands of injured. A brusque, cocksure leader who enjoys the backing of his own followers and that of his masters in Tehran, Nasrallah knows all too well that he cannot remain untouchable in this state of affairs.

Criticism of Nasrallah in Lebanon is mounting and raging, triggering violence in its wake. There have already been two attacks on Beirut. The Bekaa Valley sees daily clashes between Nasrallah supporters and opponents. The Sunni rebels in Syria are firing at the Shiite home front in Baalbek whenever they get the chance. Street fighting between Alawites and Sunnis in Tripoli is pretty much a daily occurrence. And, most disconcerting for Nasrallah, Ahmed al-Assir, a powerful Salafist sheikh from Sidon, is openly lashing out against him. Calling Nasrallah an “Iranian agent,” al-Assir has been waging quite a fierce war against him.

And we have yet to talk about the car bombs in Dahiyeh, Nasrallah’s stronghold in Beirut. After being decimated by the Israeli air force during the Second Lebanon War, Dahiyeh was rebuilt in what was said to be a formative move on the part of Hezbollah. Now this effort is going up in smoke. While the first car bomb resulted in just a few dozen wounded, the second one inflicted death in large numbers. The message the Sunni are relaying to Nasrallah is short and incisive: If you meddle in our affairs, we’ll meddle in yours. In the Middle East, nobody remains untouchable. It seems to me that the penny has just dropped for Nasrallah.

Israel is looking at this pandemonium with mixed emotions. Yes, Nasrallah is indeed a bitter enemy, but in his case, opines a veteran Israeli intelligence official, “You at least know who you’re dealing with.” Israel is familiar with Nasrallah inside out; it has studied him and knows how to play its cards against him.

It was the radical Sunni organization Jabhat al-Nusra that claimed responsibility for the second deadly car bomb in Dahiyeh. If you were to conduct a survey among Israel’s defense officials as to which of the two they would rather see on the border — Hezbollah or Jabhat al-Nusra — I don’t know who would have the upper hand, but these two would definitely run neck and neck.

It was a year ago that the IDF’s Intelligence Directorate estimated that Jabhat al-Nusra would become the dominant terrorist group in Syria. This assessment has fully materialized. Israel is listening very attentively to the tapes disseminated by the organization, identifying a Syrian rather than a Lebanese dialect. Deriding Nasrallah, they call him an “Iranian agent” and also a “Zionist agent,” cautioning him that all hell is about to break loose. We’re here to settle a score with you.

In light of this situation, Israel continues to closely monitor events, trying to predict how this will pan out. Nobody has a clue. This bedlam could go on for years, bringing about even more perilous chaos in its trail. In the interim, Israel is doing several things. It is rapidly completing the construction of a cutting-edge separation fence along its southern border in Sinai and its northern border in the Golan Heights. (The border with Lebanon already has a border fence in place.) Just to be on the safe side, a similar fence is being contemplated along the Jordan River, which separates Israel from Jordan.

When we combine these fences with the separation fence with the Palestinians, what we end up with is the most fenced-in country in the world. What a pity that these fences, which are equipped with sensors, detectors, cameras and all sorts of other devices (Israel is a world leader in developing them), cannot stop rockets or missiles.

At the same time, the rampant development of interception systems such as ''Magic Wand'' against medium- and long-range rockets and missiles continues. Meanwhile, Israel has built a military hospital in the Golan Heights, where it provides under-the-radar treatment to quite a few wounded Syrian civilians.

Israel’s greatest effort continues to focus on the chemical front. Presumably, Israeli intelligence agencies are monitoring Assad’s large depots that burst at the seams with all kinds of chemical warheads. Only in the event that this type of weaponry is transferred to foreign hands (to wit, the insurgents or Hezbollah) will Israel launch an immediate and painful military action. The attacks on “game-changing” missiles, which to date have been ascribed to Israel, will continue, should the need arise.

And in conclusion, Israel wishes both sides success, just as former Israeli Prime Minister Menachem Begin did when the Iran-Iraq war broke out in the 1980s.

As for Egypt, the Israeli approach is different. There’s no question that in this case, Israel is keeping its fingers crossed for the Egyptian military in general, and its commander-in-chief Gen. Abdel Fattah al-Sisi in particular. Israel is watching US conduct with some amusement, but also with a similar degree of concern. The Americans are in a serious bind. On one hand, they cannot support a military coup or cheer the killing of hundreds of civilians. On the other, they understand that this is what the majority of Egyptians want, and they’ve started realizing that their gamble on the Muslim Brotherhood was a particularly stupid mistake.

The American defense establishment understands the Egyptian military better than the US State Department does. Yet the more conciliatory, liberal and problematic element is President Barack Obama himself, who — according to the American system — is not considered the last decider (as in Israel), but the only one. Obama is the problem, and there is concern that by the time he grasps the magnitude of the opportunity, it will have blown away. It’s the same as when he missed the Green Revolution in Iran after the previous elections. Thousands of protesters in Tehran chanted, “Where is Obama?” yet their calls went unanswered until they collapsed.