According to a Lebanese politician once close to Hezbollah, the organization is exaggerating Jabhat al-Nusra’s size to scare Lebanese Shiites into continuing to support the party, writes Elie Hajj. 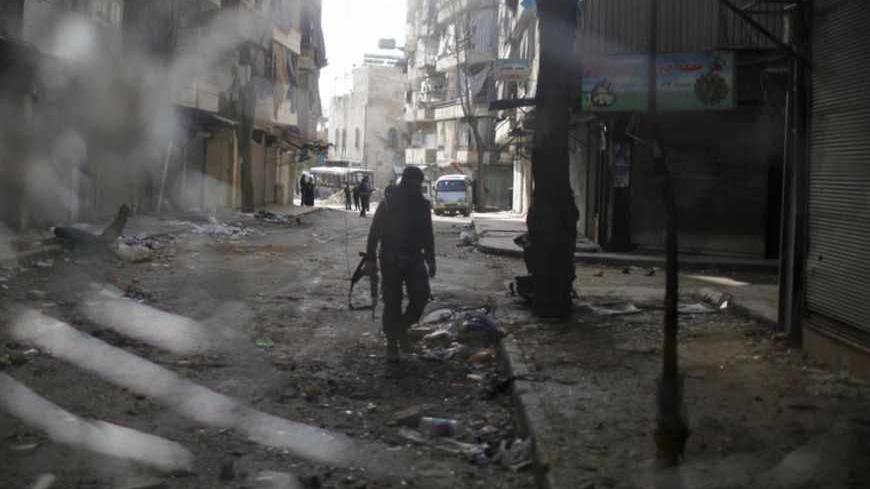 A fighter from the Islamist Syrian rebel group Jabhat al-Nusra is seen through a smashed bus window during a fight with forces loyal to President Bashar al-Assad at the front line in Aleppo, December 24, 2012. - REUTERS/Ahmed Jadallah

“There is no Jabhat al-Nusra in Lebanon. It is a fabrication by Hezbollah and by certain government security agencies that are close to or coordinate with the party. The purpose of this fabrication, which is accompanied by a Hezbollah media campaign, is to keep the party’s popular base in a state of alert after it received two shocks: first, the fall of former prime minister Najib Mikati’s government. Hezbollah controlled that government and its fall gave Hezbollah’s opponents, especially the Sunnis, a sense of relief. Second, the revelation of how much Hezbollah is involved in the Syrian war.”

This assessment was told to Al-Monitor by a politician who was once close to Hezbollah and who closely follows developments in Syria and the Lebanese Shiite community. He dismisses Jabhat al-Nusra’s size and its significance, even in Syria, considering this radical Islamist group “practically nonexistent,” with some 3,000 members at most. They are of various nationalities and traveled to Syria to perform what they call a “religious jihad,” which is similar to the “jihadist duty” that Hezbollah has adopted, allowing it to mourn its own “martyrs” killed in Syria.

The Sunni militants of Jabhat al-Nusra, who the politician said are crossing the Syrian border at several points, wear new and expensive military attire and shoes and carry large sums of money. On the other hand, Free Syrian Army (FSA) elements wear an assortment of clothes, and some do not even have shoes. He asserted, “Some are fighting almost barefoot and are hardly able to get food. In such a circumstance, it is natural for a hard-line group to attract fighters from here and there. My information is that Jabhat al-Nusra now has 1,000 or 2,000 members. But let us say that President Bashar al-Assad is right and that they number about 5,000. Compared to the FSA, which is between 125,000 and 150,000, that is nothing.”

The politician, who occupies a high-level post in the Lebanese government, said that Jabhat al-Nusra will eventually end up as a scapegoat. In his view, the US and other Western media are deliberately exaggerating the group's size and role to justify holding off on an international military intervention in Syria. That intersects with Hezbollah’s interests, although their aims are different.

He said that Hezbollah’s media and the Syrian regime are labeling Jabhat al-Nusra an American tool. But in fact, the United States is choosing not to send significant military aid to the Syrian rebels and is turning a blind eye to massacres against civilians under the pretext that Jabhat al-Nusra is in Syria. How do they square that contradiction?

The politician expects that in the end, the West will be forced to agree to an Arab and international intervention to end the Syrian crisis. That will only happen, however, after the West gives up on Lakhdar Brahimi’s mission, which UN Secretary-General Ban Ki-moon persuaded the US administration into supporting. For Brahimi, a Syrian solution can only be reached with the participation of the Syrian regime, unlike the situations in Iraq, Libya, Egypt and Tunisia. Syria requires dialogue between the regime and its opponents, but that is impossible at this time.

Comparing Syria and Lebanon, the politician asked, “What happened to Sheikh Ahmad al-Assir?” Assir is the hard-line Sunni cleric in Sidon who gathered dozens of young supporters hostile to Hezbollah. They now number around 2,000. Hezbollah exaggerated the size of Assir’s followers and portrayed him as a genuine threat to the Shiites. When the hype surrounding Assir faded, it was revealed that he did not represent so many people. He may eventually be accused of stealing a large sum of money from the famous Palestinian singer Fadel al-Shaker, who had supported him.

The politician said, “Do you know why the short-lived Assir phenomenon emerged?... It is because the Future Movement, which is headed by former prime minister Saad Hariri, had stopped providing social services and aid to the poor in Sidon and other areas because it lacked the money. Everybody is aware of the financial problems that Hariri and his movement went through. But things have improved to a certain extent, and they are expected to get even better in the coming months. Once Hariri starts providing social aid again, even if at a lower level than before, Assir will have no one left with him except his bodyguards.”

He continued, “The same applies to Jabhat al-Nusra in Syria. Its members will be induced to leave it as soon as the financial resources become available. And the core of the group, which is about a couple of hundred fighters, will no longer have a significant presence. ... Until that time, Hezbollah will try to benefit by exaggerating the size of Jabhat al-Nusra, which has no presence in Lebanon. It is in that context that I put the discovery in the southern suburbs of a bomb on which was written ‘Jabhat al-Nusra.’ The matter is clear and does not fool those who are following Hezbollah’s involvement in Syria. It is an involvement that I assert has reached a level where the party has established a passage from the Lebanese Bekaa to Homs in order to help the Syrian army. This means that most regular Hezbollah fighters are now outside Lebanon and are helping President Assad in the region stretching from Lebanon’s north to Homs. The Iranian Revolutionary Guard are in Damascus too. And Hezbollah’s permanent readiness to resist an Israeli attack on Lebanon is being handled by the party’s reserves.”