The Lebanese government is concerned over the northern Lebanese town of Arsal’s becoming a futher target of Syrian government attacks, writes Elie Hajj. 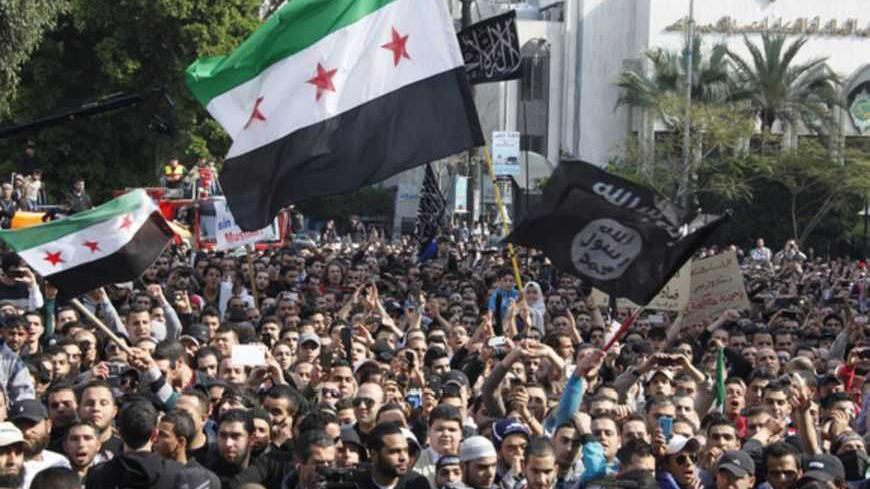 Protesters holding a Syrian opposition flag during a demonstration headed by Sunni Muslim Salafist leader Ahmad al-Assir, in support of residents of the northeastern town of Arsal in Lebanon's Bekaa Valley, in Beirut, Feb. 8, 2013. - REUTERS/Mohamed Azakir

Lebanese opposition politicians are concerned that the town of Arsal on the northeastern border with Syria could be targeted in coming days, as a prelude to it being besieged and its residents displaced. This comes amid increased talk by the Syrian regime that Arsal is a stronghold and conduit for "terrorists," in reference to militants fighting under the banner of the Free Syrian Army (FSA).

Based on the observations of opposition politicians in Lebanon, the Syrian regime has been talking through its media outlets about a camp for "terrorists" and has specified its location. However, it did not target it when it bombed the suburbs of Arsal, instead targeting other sites within its environs.

This information was given to President Michel Suleiman by official Lebanese agencies during his tour in Africa, which prompted him to ask the minister of foreign affairs to send a message to the Syrian leadership objecting to the violation of Lebanese sovereignty, though Damascus has denied the bombing.

Opposition politicians quote army commander Brig. Gen. Jean Kahwaji as having told the pro-Hezbollah Al-Akhbar newspaper that he rejects the army’s launching of an attack on Arsal on the grounds that it is a base for extremist armed Islamists, similar to the Nahr al-Bared camp, which the Lebanese army was forced to raid and destroy in 2007 after the massacre of about of 20 soldiers at the hands of Fatah al-Islam militants. The raid operation cost the army 170 officers and soldiers.

Kahwaji was also quoted as saying that Arsal is not the same as the Nahr al-Bared camp. It is a Lebanese town of about 3,000 people who work in the state’s military and security institutions: the army, security forces, the General Security and others. On the other hand, the Palestinian refugee camp, which was completely destroyed and partially rebuilt, had always been outside the authority of the Lebanese state and subject to the laws of Palestinian organizations, just like the other Palestinian camps in Lebanon.

The concerned politicians asked: Would the army commander have declared this position if there had been no incitement at a senior level against Arsal, which allies of the Syrian regime in Lebanon regard as a "thorn" on the border between the two countries? They point to a statement attributed to the army commander in this regard, in which he said: "Those advocating an army raid against Arsal can do it on my behalf.”

Opposition figures, particularly the predominantly Sunni Future Movement, lauded Kahwaji’s performance after the killing of an army officer and soldier, and a number of injuries in an unsuccessful operation conducted two months ago with the aim of capturing a wanted person actively supporting the Syrian rebels. The wanted person was unintentionally killed during the operation.

The opposition figures stress Kahwaji’s announcement from France that he was not aware of the operation — which was not well planned by the military intelligence and included serious executive errors. They also note the army commander’s denial that the officer and soldier were subjected to torture and mutilation. The opposition figures raised questions about who might have disseminated pictures of mutilated bodies — claimed to be those of army soldiers — on local television channels. The incident aroused negative sentiments against the people of Arsal, and the Sunnis in Lebanon in general.

The opposition figures also ask who supported and incited groups of young men to gather during that period near barracks and army centers, and to block international and secondary roads throughout the day over several days on the pretext of "supporting the national army in the face of murderers and terrorists."

The opposition figures assert that there is "an influential official side" protecting those who blocked roads, and the television stations that stirred strife by broadcasting disgusting and fabricated pictures. This side, along with a major party, seeks to "punish" Arsal for standing against the Syrian regime. It also aims to eliminate the threat posed by the town due to the extension of its vast territory along the border, along which traditional smugglers (the residents of Arsal have long lived on smuggling) of weapons, ammunition and militants operate in both directions. It is worth noting that Arsal accommodates a large number of Syrian refugees and opponents of the regime, and the people of Arsal greatly sympathize with them.

The opposition figures conclude: "We fear the worst based on the information available, not mere assumptions. We believe that the regime in Syria has an interest in painting the Sunnis in Lebanon and Syria as extremists, who are fighting the army in both countries. We should take a political step to protect the people of Arsal, otherwise we’ll be overcome by developments."