Beirutis on Edge Over Sectarian Tensions

Following the assault of four Sunni sheikhs in a suburb of Beirut on March 17, the city’s residents express their concerns over what appears to be re-emerging sectarian tensions, reports Elie Hajj. 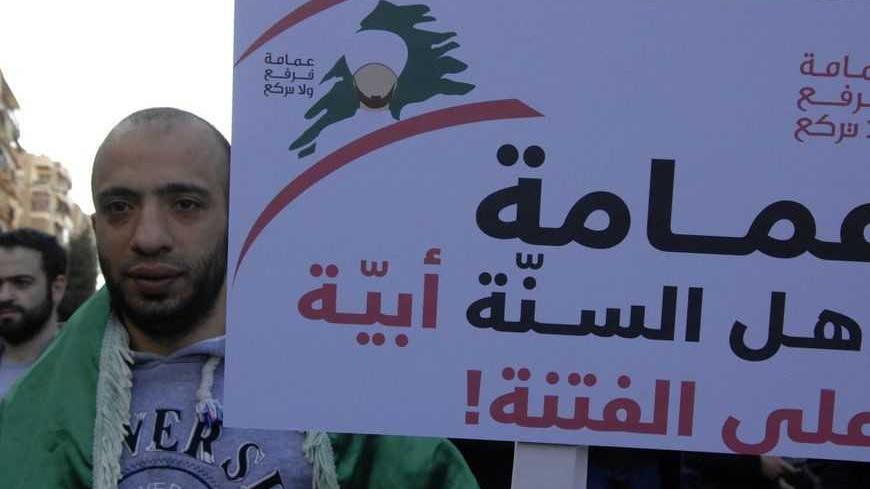 A Sunni Muslim protester carries a banner during a demonstration in the majority Sunni Beirut district of Tariq al-Jadideh against the attacks on Sunni Muslim scholars, March 18, 2013. The sign reads: "The turban of the Sunni Clerics, is superior to strife." - REUTERS/Hussam Shebaro

Old Beirutis, who have long called the capital city their home, long for the olden days when it did not matter to which sect their neighbors belonged. They have recently seen renewed tensions and fighting — either on the streets or on television — between Sunni and Shiite groups. This article will report on the impressions and testimonies of Beirutis in the aftermath of the sectarian and political incidents that took place last Sunday.

Hanaa al-Jaq, a journalist and writer for Lebanese, Arab and international newspapers and a former member of former Prime Minister Saad Hariri’s media team, said to Al-Monitor: “This is not the same Beirut I knew and grew up in. I have lived my whole life in the Barbur neighborhood. Inevitably, many Christians fled the area back in the days of the civil war, amid the deep rifts that marked our country during that dark era. When the dust of war settled, however, we reunited again. The Lebanese people are good-hearted in general and do not harbor grudges.

“During the period of reconstruction and reconsolidation of trust, led by the late Prime Minister Rafiq Hariri, we restored to a certain extent the old essence of Beirut. During my childhood and adolescence, the topic of religions and sects was never discussed. The residents of various neighborhoods coexisted peacefully,” she added.

Things have changed dramatically these days. Jaq, a Shiite woman who married a Sunni, notes that her Sunni daughter has married a Shiite. “Beirutis are characterized by openness. However, over the past few years, tensions have become heightened, particularly following Hariri’s assassination in 2005.” In this regard, Jaq blames Hezbollah, which works according to Iran’s sectarian agenda. She despondently recalls “the passive, introverted reactions — not talking or dealing openly with people belonging to another sect has become a frequent occurrence in Beirut’s mixed neighborhoods, as a result of an uncharacteristic wave of sectarian intolerance.”

The relatively high number of intermarriages between Sunnis and Shiites (numbering in the tens of thousands) does little to ease rising tensions. Many factors are deepening divisions in Beiruti society, including the current events in Iraq, Bahrain and particularly Syria, in addition to the disparate points of view regarding Hezbollah’s weapons and the Special Tribunal for Lebanon (STL). The latter has accused four members of the Shiite party of assassinating Rafiq Hariri.

While supporters of Hezbollah see the STL as an Israeli-American tool used to rope in the armed resistance movement, the Hariri-led Future Movement vehemently advocates its verdicts. This factor is probably the most glaring difference between the two camps, whose primary locations are in the same area. Another matter of dispute took center stage recently, with Hezbollah vigorously supporting the Assad regime in Syria while Sunnis widely express enthusiasm for the Syrian rebels.

This deep-seated tension in Lebanon surfaced on March 17 in Beirut and the southern suburb of Chiyyah, when young Shiite men physically assaulted four Sunni sheikhs and shaved their beards. This incident galvanized the Sunnis, who took to the streets in outrage and blocked many roads in Beirut with burning tires.

According to Lebanese MP Nuhad Mashnuk, the foresight and wisdom of the chief of the Lebanese Armed Forces, Jean Kahwaji, helped to broker a solution when the army detained the assailants. Mashnuk praises Kahwaji and calls to mind the latter’s positive role in containing the repercussions of the Arsal incident weeks ago. Mashnuk renewed his confidence in the ability of the army and security agencies to ensure security and stability to all citizens equally. He stressed, however, that the “assailants should be punished according to the law” and rejects any “[out of court] settlements in the matter.” Speaking of the incident, the Minister of Interior considered the assailants to be a group of drug addicts, seeing no political motive whatsoever behind the attack.

Mashnuk, however, denies what was expressed by the Minister of Interior. “How did two groups of drug users carry out attacks in two different areas at the same time? The incident extends farther than this,” affirmed Mashnuk to Al-Monitor. MP Tamam Salam agrees with his colleague. Both politicians agree that the Syrian factor has the upper hand in this matter; is not solely local.

Nonetheless, pro-Hezbollah Shiites hold the Sunnis responsible. A Shiite grocery store owner in Khandak al-Ghamik, who only referred to himself by his first name, Mohammed, affirms that the provocative speeches made by Sheikh Ahmad al-Assir — a new superstar in Salafist circles — seek to incite Shiite sensitivities. Yet, Mohammed makes sure to voice his objection to the attack on the Sunni scholars.

Through defamatory speeches, Assir constantly attacks Hezbollah Secretary-General Hassan Nasrallah, a figure whom Shiites hold in high regard. Additionally, Assir levels accusations against the weapons maintained by Hezbollah, which are regarded by supporters of the party and the resistance as exalted. Yet, the word “resistance” merely denotes to the Sunnis the incident that took place on May 7, 2008, when Hezbollah raided and took over Sunni neighborhoods. Nasrallah announced afterwards, in a reply to his critics, that it was a joyous day. Later, Nasrallah, tried to contain the situation even though the damage was already done. The Sunnis of Beirut did not understand until today the fact that they are no longer calling the shots in their city. They still speak about May 7 as if the humiliating events of that day happened yesterday.