Lebanese Speaker Nabih Berri remains a critical player in Lebanese politics, including whether there will be passage of an electoral law, writes Elie Hajj. 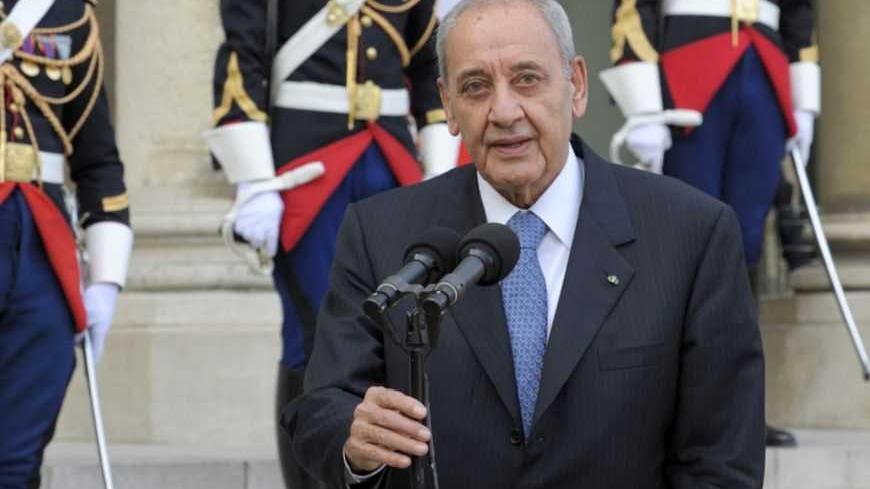 One man alone plays the strings of the Lebanese political fiddle, his friendship equally sought by all parties. He has held the second-most powerful position in the state for 21 consecutive years. A young Lebanese woman tweeted recently that she had concluded her university studies, watched six soccer World Cups, witnessed the election of four presidents and three popes, but known only one Speaker of parliament — Nabih Berri, the head of the Hezbollah-allied Shiite Amal Movement. This is a man whose role grows exponentially every time solutions or compromise are required.

Proposed solutions for Lebanon's multitude of complex problems have all found their way to Berri, the wizard of Lebanon’s political Oz. The first urgent matter, which led to the resignation of Prime Minister Najib Mikati, pertains to the retirement of Maj. Gen. Ashraf Rifi, director general of the Internal Security Forces. This issue arose at a time when Mikati had wanted to extend his stay in office, due to his extensive experience and the delicate security situation that the country is experiencing, in addition to factors relating to the outgoing prime minister’s desire to gain the favor of his (Sunni) community.

At the other end of the spectrum, and as a result of pressure from Gen. Michel Aoun, the Hezbollah-led March 8 coalition categorically refused to extend the tenure of retiring officers, including Rifi, the head of Military Intelligence, the army’s commander and others. The solution proposed by some parliamentary blocs, with tacit cooperation from Berri, was to submit a petition in this regard bearing the names of 69 of the 128 members of parliament (MP), representing more than 51% of all deputies. Berri would thus allow deliberation and approval of a solution to one of the major problems standing in the way of finding solutions to even more important ones, namely, the formation of a new cabinet. This would be followed by the adoption of a new electoral law and an understanding reached on the conduct of the elections themselves, subsequent to a few-months' extension of parliament’s term on technical grounds. A new cabinet would be formed in parallel, and who knows, the basket of agreements might also include the election of a new president in the first half of 2014.

These problems, at least in theory, could be easily overcome by the shrewd Berri, always quick witted and humorous, and who rarely loses his temper or his ability to deal with developing situations. Through contacts with politically opposing deputies who met with Berri separately over two days, Al-Monitor learned that the Speaker has promised MP Walid Jumblat’s bloc, the National Struggle Front, and former prime minister Saad Hariri’s bloc, the Future Movement, that he will not put the Orthodox Gathering electoral draft law to a vote if deputies representing important components of Lebanese society are absent, meaning the Sunnis and the Druze. The said law stipulates that the members of each religious sect elect their own representatives on a proportional representation basis, with the whole of Lebanon serving as one electoral district.

On the other hand, Berri informed his two allies, Hezbollah and Aoun's Free Patriotic Movement, that he intends to submit the Orthodox law to a vote at the beginning of the legislative session that he will convene on April 4. This would follow the conclusion of binding parliamentary consultations conducted by the president, which would lead to the appointment of the Sunni figure who receives the most votes forming the new government.

Berri said to the March 8 forces, “Be careful. The parliamentary majority that we’ve enjoyed for the past two years with Mikati and Jumblat has crumbled. Both men are now in agreement with the March 14 coalition on the subject of extending Rifi’s tenure, as well as other issues. We cannot, by ourselves, impose whatever we want, and that is something that must be taken into consideration.”

In parallel, he is coordinating with representatives of the March 14 coalition in order to guarantee a vote tally different than expected and remove the Orthodox law proposal from circulation in parliament, when deputies belonging to the Lebanese Forces bloc vote against it, after receiving the necessary cover to backtrack on the pledge they gave at the Maronite patriarchate in Bkerke to support the draft. This cover is afforded them by the stance of the president, who staunchly opposes the law, and the belief that Maronite patriarch Cardinal Bechara al-Rai will espouse a similar position or at least remain silent on the matter.

During the parliamentary session and after it, the Lebanese Forces deputies will justify their new stance by saying that coexistence and agreement are extremely important at this delicate stage in Lebanon’s history and that the Orthodox law proposal had been rejected by two major religious sects. MP Georges Adwan, vice president of the Executive Committee of the Lebanese Forces Party, told Al-Monitor, “At this stage, we are only working toward finding a consensual proposal.” Adwan also implied that his party is going to propose a new, mixed electoral law that involves a combination of proportional and majoritarian representation in the hope that the draft will receive approval in parliament.

Discussions pertaining to a new electoral law had come to a halt when Speaker Berri insisted on a formula he had submitted whereby half (64) of the deputies would be elected through a proportional system and the other half through a majority system. The Future Movement rejected the formula, insisting that it would not concede any further than to allow 60% of deputies to be elected through a majority system and 40% through a proportional system. Meanwhile, the Progressive Socialist Party (Druze) demanded that proportional representation not exceed 30%.

There are some in the March 14 coalition who fear Berri’s formidable ability to maneuver, his capacity to spot the weaknesses of his interlocutors and his complete control over the sessions that he chairs. As a result of the great disadvantage of Berri's opponents, the March 14 deputies held a meeting at the “Center House,” but did not issue a statement afterward. The topic of discussion seems to have been to unify their position, vision and discourse in order to deal with the man capable, if he so desires, of manipulating the March 14 coalition by encouraging some of its Christian elements to back the Orthodox law. Moreover, Berri is able to turn the attention of the Muslims in the coalition toward the growing aspirations of Christians to recover the power and influence they were afforded by the Taif Accords, which ended the civil war, or their former glory before the war. This level of power is not consistent with the Christians' current demographic presence or their weight and influence in determining state policy. If either faction accedes to Berri’s propositions, it will surely result in the disintegration of the March 14 coalition.

Elie Hajj writes on politics for An-Nahar (Lebanon). He previously wrote for Al-Anbaa (Kuwait) and the online publication Elaph.