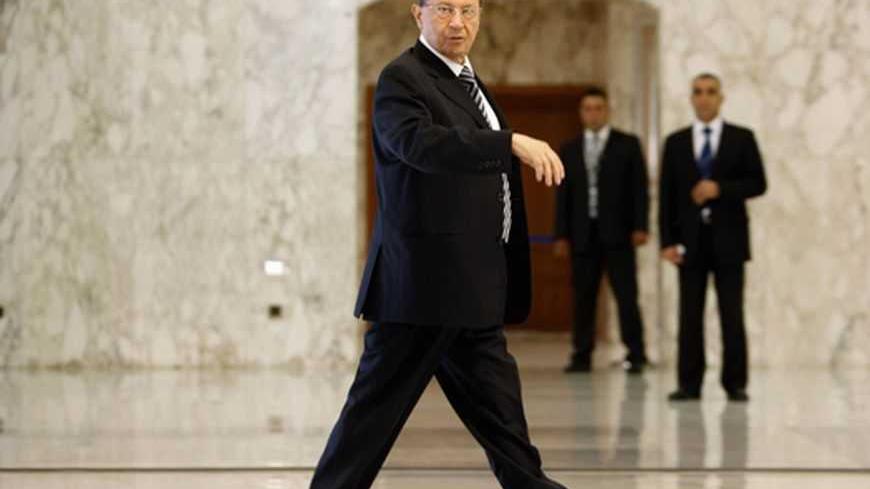 Lebanese Christian leader Michel Aoun arrives at the Presidential Palace in Baabda, near Beirut, to attend a session of the national dialogue aimed at resolving deep rifts which have been exacerbated by the unrest in neighbouring Syria, June 11, 2012. - REUTERS/Mohamed Azakir

The gulf between Lebanon's two main political blocs — the March 8 and March 14 coalitions — looms large as they are put to the first real test in preparing for upcoming parliamentary elections: agreeing on an electoral law. Hezbollah has managed its bloc tactfully, intelligently and with ease and has scored a number of points, which provide significant political support to its Christian ally Gen. Michel Aoun. Meanwhile, a sense of loss and confusion prevailed among the opposition bloc — the March 14 coalition — which appears increasingly disjointed.

The two Christian parties — or "brotherly rivals," the Lebanese Forces Party and the Kataeb Party — surprised their opposition allies when they again supported an election law carrying the name of its writers: the "Orthodox Gathering" proposal. This draft would have members of each sect elect their representatives in parliament on a proportional basis, with all of Lebanon considered a single electoral district.

The two parties had previously agreed with their March 14 coalition allies — particularly the Future Movement, whose base is dominated by Sunni Muslims — on a draft elections law that the coalition had presented to parliament. It involved dividing Lebanon into 50 districts and distributing the 128 members of parliament (MPs) among these districts, with each district having at most two or three seats. The two Christian parties ignored this mutual understanding and when they met their rivals — the Free Patriotic Movement and the Marada Movement — at the headquarters of the Patriarchate of the Maronite Church, they were informed that the Hezbollah-led March 8 coalition had signed onto the Orthodox proposal. The major Christian parties agreed that this proposal would provide maximum representation for Christians in Lebanon, 64 MPs out of a possible 64, without affecting their Muslim partners’ selection of their own MPs.

The two parties acted surprised by Hezbollah's position, despite the fact that, for several months, there had been suggestions that Hezbollah would take this step to support the position of its special Christian ally, Aoun. Opinion polls confirmed that the March 8 coalition would be the likely winner if elections are held next June under the Orthodox proposal. Two senior officials from the Lebanese Forces and the Kataeb parties told Al-Monitor that the adoption of this law would make predicting the winning bloc tough, because the outcome would be decided by only one or two MPs out of 128. This would allow the elections to take place, since each competing bloc would enter the competition knowing that they had a chance to win a majority, rather than feeling the result was predetermined.

Under the previous law (which is known as the 1960 Electoral Law, and is based on a winner-takes-all system diving Lebanon into 22 districts), March 14 would certainly be the winner. The same applies to the newly proposed law that suggests dividing Lebanon into 50 small-sized electoral districts. On the other hand, the law prepared by the government, which is based on a proportional system and divides Lebanon into 13 districts, would guarantee a victory for the majority March 8 coalition. None of these draft laws will pass due to increasingly hardened positions and the distribution of power in parliament. In particular, Druze leader and head of the Progressive Socialist Party (PSP) Walid Jumblatt is intent on not choosing one side over the other, on the basis that the "1960 Law" will be valid if another is not agreed upon. This law is best suited to the interests of Jumblatt and his party’s leadership, since it allows the PSP to include approximately six Christian MPs in its parliamentary bloc, while the "Orthodox" proposal will likely only afford Jumblatt 6 Druze MPs out of the possible 8 allotted to this sect in parliament.

Former President of the Republic and head of the Kataeb Party Amine Gemayal told some of his political allies that he did not agree with the idea of each sect electing its own MPs in parliament (the "Orthodox" law), because "it equates to the division of Lebanon." The head of the Lebanese Forces Party, Samir Geagea, held a series of painstaking meetings with his allies in the March 14 coalition — in particular the Future Movement — until the allies agreed upon the small-sized electoral district draft law. This draft law would limit some of their influence, and allow Christians a higher proportion of MP representation.

Officials from the Future Movement were shocked when they learned of their allies' departure — particularly that of Geagea — and meeting with their adversary, Hezbollah ally Aoun, to support the Orthodox proposal. They believe that their opponents in the Shiite party resorted to this law to obtain a majority in parliament. The party thinks this majority would appear democratic and provide a substitute for Hezbollah's weapons. The "Futurists" knew that a departure was inevitable in 2013.

Muslim members of the March 14 coalition have focused their efforts on reproaching Geagea in public and in private. They had high hopes for the role that he would play in carrying out presidential elections, particularly after all Arab countries and cities — from Riyadh to Cairo to Gaza — opened their doors to him. President Amine Gemayel's allies had adopted his political style, which included keeping lines of communication open with all party to the crisis and remaining open to all options, even when it caused embarrassment or angered his allies. "That's President Gemayel," they would say, expressing their understanding regarding his position in his dealings with his son, MP Sami Gemayel. The son is the Kataeb Party strong man, and views Muslims, Sunnis, Shiites and Druze from the same angle when it comes to the "usurped rights of Christians" in parliament.

As the anger of the Future Movement became public, the Futurists from the Christian wing of the March 14 coalition rushed to express their rejection of the Lebanese Forces and Kataeb parties' move and harshly criticized the Orthodox proposal. They held a meeting in the home of MP Boutros Harb, inviting historic figures such as head of the National Liberal Party Dory Chamoun, president of the National Bloc Carlos Edde, son of the "Father of Independence" and former minister Michel Khoury, and March 14 visionary and former MP Samir Franjieh. They stated that two parties alone cannot represent the bloc, and noted that they represent a larger audience.

Geagea was angered by the Future Movement's reaction and the tumultuous position of independent Christians. He had hoped — according to what sources close to him told Al-Monitor — that his allies would show him a fraction of the deference that Hezbollah shows for Aoun.

The sources — including one of Geagea's MPs, George Adwan, who represented Geagea in meetings held by the Reduced Parliamentary Committee to discuss electoral law at a hotel near the parliament building — added that the Lebanese Forces party was committed to their allies as much as they were committed to ensuring Christian representation. However, these allies must "calm down a little bit and realize that there is no going back to the 1960 Law. Returning to this law would lead to a 'massacre' at the ballot boxes for the Christians within the opposition, just as happened in the 2005 elections because of the adoption of the electoral law prepared in 2005 by Maj. Gen. Gazi Kanaan, the former Syrian interior minister who committed suicide."

Perhaps what puzzles Geagea most regarding the position of his allies and their political "maneuver" is that they have not faced the facts confirming that the Orthodox Gathering proposal will never be applied. First and foremost, Parliament Speaker Nabih Berri cannot go ahead with a law that is being boycotted by representatives of two sects, the Sunnis and the Druze. Moreover, President Michel Suleiman rejected the law, and a similar position was taken by the head of the Maronite Church, Cardinal Bechara Boutros al-Rahi: "So why all this panic and skepticism about alliances?"

Elie Hajj writes on politics for An-Nahar in Lebanon. He previously wrote for Al-Anbaa (Kuwait) and the online paper Elaph.