Lebanese Elections Will Not Happen in September

While the debate continues over the so-called Orthodox Gathering law, along with other governmental roadblocks, it is unclear when parliamentary elections will be held in Lebanon. 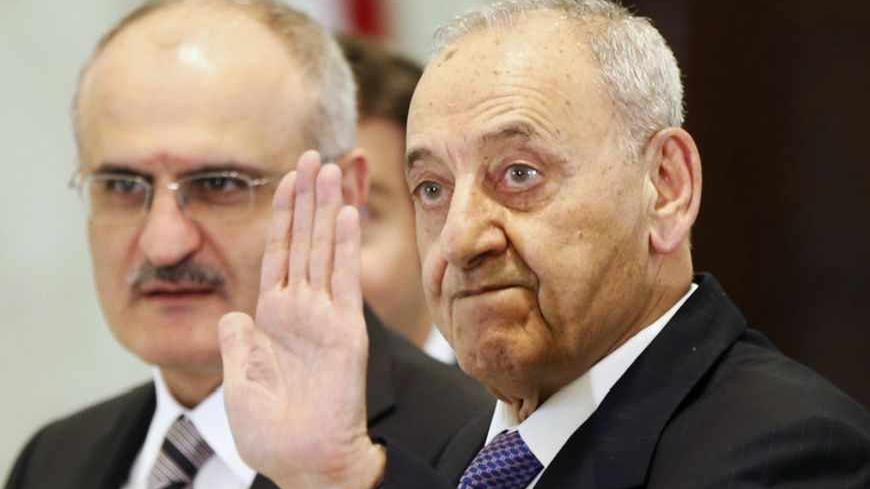 It has become a foregone conclusion: The parliamentary elections in Lebanon will not be held in September, as set forth in the constitution. Thus, extending the parliament’s mandate has become inevitable. Why and how did the situation get to this point?

Serious discussions are taking place behind the scenes about the extension of parliament’s mandate, which ends in September. The fact is, it has become certain that the organization of elections is impossible in the absence of an agreement on an electoral law.

Fouad Saad, an MP for the Christian and Druze region of Aley, told Al-Monitor that "there are two opinions about the extension period. One that suggests shortening the duration of this period and making it range between three and six months maximum, in order to avoid giving the impression that Lebanon is undergoing an abnormal situation and cannot be trusted, as witnessed by its inability to conduct parliamentary elections at a time in which other Arab countries are organizing elections despite the severe disruptions they are enduring. The other opinion calls for a two-year extension because the short period will quickly come to an end under the already charged atmosphere, which is growing increasingly heated as the elections draw near.”

This means that the meetings held by Speaker of Parliament and head of the Amal Movement Nabih Berri are only media-oriented and will not have an effect on the election process and the ballot boxes.

Politicians and MPs asked by Al-Monitor about their opinion on Hezbollah's position on the extension, assert that the party does not want to hear anything about the parliamentary elections, at least not at this stage, as the party is engaged in a heated and serious confrontation alongside the regime of Syrian President Bashar al-Assad. Some politicians believe that Hezbollah tasked its ally Berri with running a diversion operation to avoid having his party blamed for the consequences of failing to hold the elections. Thus, [Hezbollah’s] coalition supported the position of one of its members, Gen. Michel Aoun, who clung to the Orthodox Gathering Law for several reasons.

Berri and Hezbollah Secretary-General Hassan Nasrallah have repeatedly announced that they will call on the two political blocs to vote for this law, which garners the support of many Christian groups.

A prominent March 14 MP told Al-Monitor on condition of anonymity, "In my opinion, even our allies in the Future Movement are not in a rush to hold the elections. Their leader, [former Lebanese Prime Minister] Saad Hariri, has been abroad for more than two years and is unlikely to return in the coming months. It is not easy for his movement and supporters to attract Sunni voters in his absence. On top of that, the movement needs great financial potential to contest the elections, but it does not seem to have this potential given the strong financial crisis experienced by Hariri (and the Future movement by extension). Furthermore, isn't it better for [Hariri] to wait until the end of the conflict in Syria, given that he has put all his cards with the revolutionary and opposition forces there and put his entire political and media potential at their service?”

The rival camp of Hezbollah and its allies was about to fall into pieces on May 14, the day the parliamentary session was held to adopt the new parliamentary law. Suddenly, in the afternoon, an agreement in which [Druze leader] Walid Jumblat took part was reached over a mixed system, pursuant to which 68 MPs would be elected according to the majority system, while the remaining 60 would be elected according to the proportional vote system to improve Christian representation in parliament. The Lebanese parliament consists of 128 MPs, equally distributed between Christians and Muslims, in conformity with the Taif Accords that brought the long-standing Lebanese war (1990-1975) to a halt. It is worth noting that according to subjective cross-referenced studies, the percentage of Christian residents in Lebanon is about 38%, while Muslims amount to 62%.

As the agreement over the mixed system was announced, the bafflement emanating from the March 14 camp transferred to the March 8 coalition, which was intent on adopting the Orthodox law or causing a huge conflict among its rivals. Yet, the whole issue was a mere game of scoring points, to which the Lebanese people have grown accustomed, while not a glimmer of a solution is looming on the horizon.

On May 15, the session during which the Orthodox law was supposed to be examined and ratified was not held. The proposal was agreed upon by the four pillars of the Maronite sect — leader of the Kataeb Party Amin Gemayel, leader of the Free Patriotic Movement Michel Aoun, leader of Lebanese Forces Samir Geagea, and leader of the Marada Movement Sleiman Frangieh — with the blessing of Patriarch Bechara al-Rai, who is currently on an extended tour in Latin America visiting church members.

Yet, Al-Monitor was informed that the patriarch has altered his stance in regard to the electoral law. High-profile interventions have persuaded him to give up on the Orthodox law, which stipulates that each sect elects representatives from its own sect. The figures who talked the patriarch out of it informed him of the impossibility that Muslims — especially Sunnis and the Druze — would accept such a law, stressing that they will vehemently oppose and boycott it, fearing it would widen the gap in the country. The president, then, will try to prevent it from happening by cutting the road short, sending the proposal back to the parliament and challenging it before the Constitutional Council. Subsequently, Christians would have to compromise their aspirations of electing their 68 representatives all by themselves and accept partnership with their fellow citizens, even if it is unequal.

What will happen now? Without an electoral law and in the absence of a government Beirut MP Tammam Salam was assigned to form (and is unlikely to),  Lebanon can only be seen in the coming months as a country living through an extended caretaker phase as best  it can.