Lebanese Prime Minister Najib Mikati announced his resignation, in a move many attribute to his government's inability to hold parliamentary elections on schedule, writes Elie Hajj. 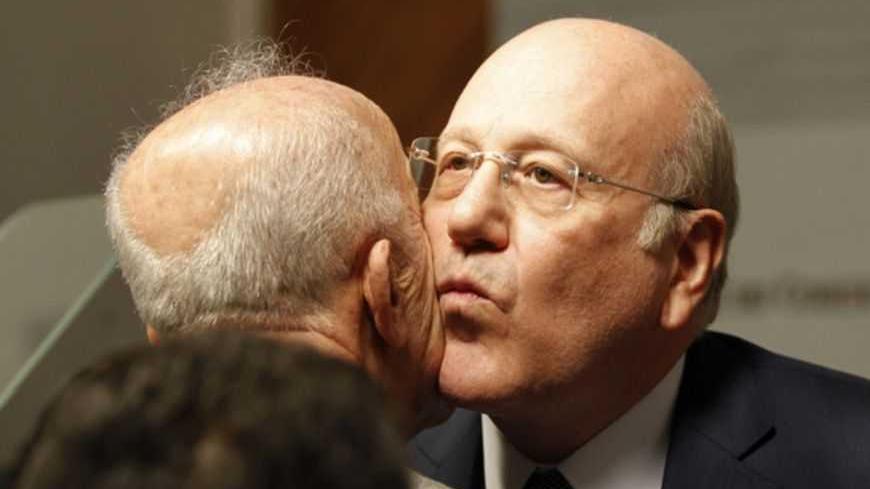 Politicians following recent developments have told Al-Monitor that the real, substantive cause that drove Lebanese Prime Minister Najib Mikati to resign was his government's inability to hold parliamentary elections on schedule.

Since Thursday evening, the now-resigned Prime Minister Mikati had been dropping repeated hints that he planned to take a “major step.” But few believed that he would actually resign. Skeptics and acquaintances pointed to prior episodes that had demonstrated the prime minister was a first-class maneuverer, possessing an extraordinary ability to absorb political shocks and convulsions while still retaining remarkably calm nerves. So much so that MP Farid Makari, vice-president of the Lebanese Parliament and former friend of Mikati’s, once dubbed him “a hypnotist.”

Despite all that, Mikati went on to surprise everyone and actually resigned. A number of those whom he contacted translated his explanation by saying, in essence, that he can’t take it anymore. In particular, he described the position of Hezbollah — the main backer of his government and a staunch ally of the Christian party of Gen. Michel Aoun, whose bloc holds 10 seats in the tripartite government — as the proximate cause of his resignation. Specifically, the party’s refusal to extend the term of the Maj. Gen. Ashraf Rifi as head of Lebanese internal security forces. Rifi was considered to be affiliated with the opposition to the government and specifically with the Future Movement, a Sunni party based in Tripoli, Lebanon’s second-largest city and Mikati’s hometown.

A prominent political figure who spoke to Mikati a few hours before the last meeting of his Cabinet told Al-Monitor that Hezbollah had been informed of Mikati’s desire to resign in the event Rifi’s term was not extended. According to her, the Hezbollah leadership’s response was, in essence: “If he wants to resign, then let him. He’s free to do whatever he likes.”

This necessarily raises a central question: Did the party decide to abandon a friendly government after the latter began to erode its political capital through its inability to address the enormous problems facing Lebanon, particularly at the economic level?

A prominent MP and head of one of the opposition parties stressed to Al-Monitor that Mikati’s resignation caught Hezbollah and its allies by surprise. The resignation was accepted by President Michel Suleiman shortly after the Cabinet meeting began. The same source added that “Hezbollah and its allies expected that the prime minister would, at the very most, cease to attend Cabinet meetings. They never thought he would actually resign.”

Speaker of Parliament Nabih Berri was well aware of what was about to occur, as Mikati had informed him of his intention to resign. Berri, an ally of Hezbollah, exerted his utmost efforts to dissuade the prime minister from taking this step, but in vain.

Politicians following recent developments have told Al-Monitor that the real, substantive cause that drove Mikati to this step was his government's inability to hold parliamentary elections originally scheduled for this June. This, in turn, was due to the inability of the country’s various factions to reach a mutual understanding regarding a new election law.

President Suleiman attempted during the last meeting to adopt a resolution from the Parliament that would designate an independent body to supervise the elections, ensuring that they would proceed according to what has become known as “the 1960 Law,” which regulated the latest round of elections in 2009. But ministers from Hezbollah and the other parties aligned with it rejected the proposal and refused to name any members to the body. This forced President Suleiman to request an adjournment of the meeting Mikati had requested and in which he raised the issue of extending Rifi’s term — which Hezbollah also rejected. Afterward, Mikati left the Presidential Palace in a rage, headed to the prime minister’s headquarters at the Grand Serail, and read out the statement of his resignation. He told reporters that he had been contemplating the move since the assassination of Maj. Gen. Wissam al-Hassan, the chief of the information branch of the Lebanese Internal Security Services, in an explosion that rocked the neighborhood of Ashrafieh on Oct. 19, 2012.

Mikati called for a comprehensive national dialogue and the formation of a national unity government embracing all the conflicting parties in Lebanon. When asked if he intends to return to head such a government, he answered that the question was premature.

Reports are spreading in Lebanon about Hezbollah’s desire to reach a comprehensive agreement to form a government — including an agreement on an election law and a mechanism for providing a “technical” extension of the current Parliament for the next several months. Such an agreement would contain a provision enabling Lebanese to vote according to a dual electoral system, one combining proportional and majoritarian elements. However, these reports have yet to be confirmed.

On the other hand, some opposition political figures of the March 14th coalition fear that Hezbollah's plan will require emptying the leadership of the security and military establishments and the neutralization of constitutional institutions, from the Cabinet and the Parliament to the Presidency for the coming year. This theory, however, lacks adequate support.

What is known for certain is that Hezbollah has lost a government that was under its effective control, and that Lebanon has entered a new and exceedingly dangerous period. This is what pushed Mikati, as he handed in his resignation, to utter the emotional words, “God protect Lebanon.”