As the debate regarding the Orthodox Gathering law rages on, amid a complicated web of alliances between Lebanon’s sectarian contingents, elections are unlikely to take place according to schedule, writes Elie Hajj. 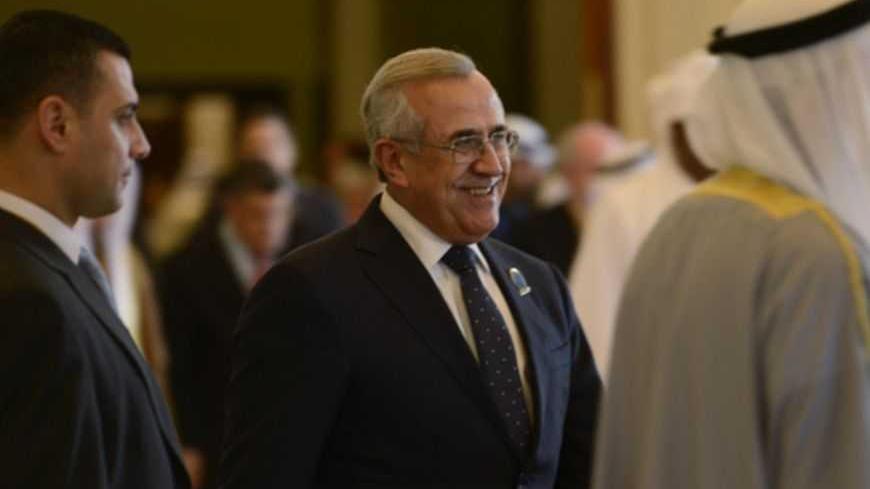 Lebanese President Michel Suleiman walks to a luncheon held during the International Humanitarian Pledging Conference for Syria at Bayan Palace on the outskirts of Kuwait City, Jan. 30, 2013. - REUTERS/Stephanie McGehee

Regardless of the governing electoral law, the Lebanese elections need to happen to ensure the stable and continuous functioning of the constitutional bodies.

So far, however, nothing indicates that the Lebanese people will head to the ballot box — at least not this summer.

President Michel Suleiman and Prime Minister Najib Mikati had signed a decree inviting voters to participate in the elections in a remarkably quick way. This step intimidated the Hezbollah-led March 8 Coalition, which constitutes a majority in the government. Hezbollah refuses to revert to the applicable 1960 electoral law based on political and demographic balances and data that have completely changed.

Hezbollah and its allies are not the only ones rejecting the 1960 law. Most March 14 Christians, allied with the Sunni-based Future Movement, also share this stance. Oddly enough, the March 14 Christians agreed with their Christian opponents and gathered around General Michel Aoun and the Free Patriotic Movement. They felt that the Orthodox Gathering Law best represents the Christians in the parliament, as it stipulates for people of a certain sect  to vote for their members of parliament from the same sect to achieve the effective balance that was set forth in the Taif Accord, despite the disparity in percentages and figures between the Christians (38% of the total number of residents) and the Muslims and Druze (62%).

The surprising stand taken by the two main parties that represent the Christians of March 14 — the Phalangist Party and the Lebanese Forces — may strain relations with their Sunni allies. They believe that the Future Movement and its understood ally, Druze leader Walid Jumblatt, prefer the 1960 law because it guarantees them a large number of parliamentary seats, to the detriment of Christians. Matters have evolved and escalated to public rivalry, opening old files on social media between the supporters of the Future Movement and the Lebanese Forces.

However, these tensions between the allies quickly vanished, after the Future Movement expressed its understanding of the aspirations of its Christian allies and agreed to adopt a law based on a mix between the majority and proportional systems to represent the Christians properly.

Officials from the two Christian parties publicly voiced political messages, which state that they only agreed on the Orthodox Law to push their allies and other parties to abandon the 1960 law. They also want a law that all components of the Lebanese society agree on, so that Sunnis, Druze or any other sect do not feel that there is any plan to exclude them or to weaken their presence and interests in the country. As a result, the disagreements were reduced after they appeared tense for a number of days.

In the past few days, continuous meetings have been held and many calls have been made between both parties to seek a new common proposal for the parliamentary elections, in order to reunite the coalition’s visions, especially as the 8th anniversary of the movement nears. It is noteworthy that the March 14 Coalition created a political and public setting that led to the withdrawal of the Syrian army from Lebanon and to the establishment of the Special Tribunal for Lebanon to try the assassins of the late PM Rafiq Hariri.

However, although the party won the parliamentary elections twice in 2005 and 2009, it failed in its style of ruling. The reasons behind this can be summarized by the opposing pressure from Hezbollah and its allies and the accumulation of political mistakes committed by March 14 Forces, in addition to unfulfilled promises. Moreover, the severe financial dearth that the Future Movement, the strongest party in the coalition, endured did not help either.

Arab, and specifically Gulf, conditions burdened the March 14 forces, especially former PM Saad Hariri, who has been living between Saudi Arabia and France for two years for security and other reasons. They caused the coalition to lose its credibility to a large extent before a public that preferred to support its principles from afar, without participating in the political activities and public movements that the party called for on  several occasions.

LF Vice President George Adwan MP told Al-Monitor that the next few days will witness the announcement of a consensus over an electoral law that satisfies the National Struggle Front MP Walid Jumblatt. The Future Movement is clinging to an agreement with Jumblatt at the electoral level, knowing that he has a moderate stance that maintains balance in both the cabinet and parliament.

Other sources told Al-Monitor that the discussed draft law dictates the election of 70 MPs out of 127 in the parliament, based on the majority system, just like before. The remaining 58 MPs are to be elected based on the proportional representation in governorates.

The sources added that the issue of the distribution of governorates  in Mount Lebanon was resolved by labeling every district that has more than five MPs a governorate.

The mountain region will be divided into the following governorates: Byblos, Keserwan, North Metn, Baabda, Chouf and Alay. This way, Jumblatt and the Kataeb will have gotten rid of the burden of Shiite voting that only takes on one direction, based on Hezbollah’s decision. They have limited it to Baabda district, so that it does not decisively affect North Metn, Chouf or Alay. Thus, the biggest obstacle in front of establishing consensus between March 14 and Jumblatt was removed.

However, prominent politicians confirmed to Al-Monitor that neither this electoral proposal presented by March 14 and Jumblatt nor the Orthodox Law will pass. The first will be rejected by Shiites, while the second will be rejected by the Sunnis, Druze and March 14 Christians, who only saw it as a way to get rid of the 1960 law.

Since the 1960 law has been “buried,” and parties have been competing to declare its death, there will not be any elections in Lebanon, at least not according to the schedule as stipulated in the constitution. In the absence of any sudden developments that might turn things around, the US ambassador will have wasted her time visiting politicians. Washington’s efforts to maintain stability in Lebanon seem to have been to no avail.