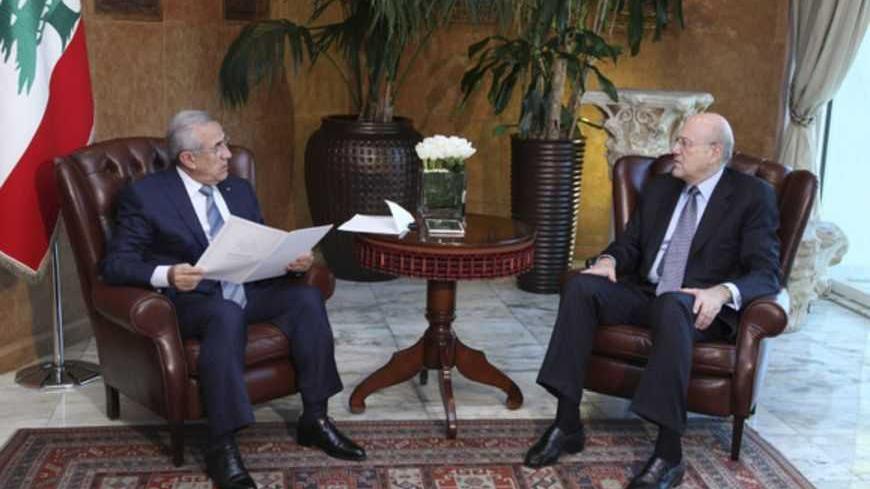 On Friday evening [March 22], Lebanese Prime Minister Najib Mikati announced his government’s resignation. He resigned because most Cabinet members refused to allow the National Defense Law to be violated by extending the security officials’ term past their retirement date, as Mikati had wanted. But if one looks behind the scenes, the reasons for the resignation are more complicated, creating the possibility of a vacuum in the Cabinet and perhaps even in Parliament, and maybe even more. It would place the Land of the Cedars at a crossroads: Either a comprehensive settlement, or else!

As the saying goes: The third time’s a charm, which seems to apply perfectly to Mikati. He first threatened to resign in early 2012, over whether the Lebanese government should pay its share to the Special Tribunal for Lebanon. The UN Security Council established the tribunal to look into former Prime Minister Rafiq Hariri’s assassination in 2005, and Lebanon was required to pay half of its costs. At the last minute, Mikati found a way to circumvent the will of the Cabinet majority, which was opposed to funding the tribunal. He succeeded in making Lebanon pay its share for the tribunal in contravention of government funding procedures.

About 10 months later, Mikati threatened to resign for the second time. That was after the assassination of Maj. Gen. Wissam al-Hassan, a Lebanese intelligence official in the Internal Security Forces. He was killed in an explosion in Beirut on Oct. 19, 2012. However, the ambassadors of five major countries immediately called Mikati and officially declared their governments' opposition to a Cabinet vacuum in Lebanon, which made Mikati decide to stay on.

Mikati made a third, and final, move to resign on the evening of March 22. In the afternoon of that day, the Lebanese Cabinet held a regular session. Then, suddenly, in agreement with the president and outside the meeting’s agenda, Mikati proposed to extend the term of Maj. Gen. Ashraf Rifi, the director general of the Internal Security Forces. Rifi reaches the legal age of retirement at the end of March. The issue was put to a vote within the Cabinet, as stipulated by the constitution. But the majority voted against the extension. So Mikati asked the Lebanese president to adjourn the Cabinet meeting, and he immediately went to his Grand Serail office to announce his government’s resignation.

Actually, the matter is ironic. Rifi is supported by former Prime Minister Saad Hariri, a fierce opponent of Mikati. And it was Mikati’s opponents who requested that the law be broken and that Rifi’s term be extended. But anyone who knows the complexities of Lebanese politics knows that Rifi hails from the northern city of Tripoli, Mikati’s hometown. Mikati has been an MP from Tripoli since the Syrians chose him in 1996. If there is an election, Mikati will be campaigning in Tripoli. Rifi is also very popular in Tripoli, which is almost exclusively Sunni and which has been experiencing security tensions for four years amid the emergence of radical Sunni, Salafist and jihadist groups.

So, Rifi is Sunni and is supported by Hariri’s team, which represents the majority of the Sunnis. Mikati, also a Sunni, represents a minority in that community and he needs to be popular in both his hometown and among his Sunni community.

However, the reasons for Mikati’s resignation go beyond Tripoli and the Sunni community. One reason was the inability of Mikati’s government to conduct parliamentary elections before June 20, the date when the current Parliament’s mandate ends, because the Lebanese political forces have failed to agree on a new electoral law. The election law under which the 2009 elections were conducted has been agreed upon by the Lebanese parties under Arab and international sponsorship, which resulted in the Doha agreement in May 2008. That agreement came after the situation flared in Beirut between Sunni and Shiite gunmen on May 7, 2008. The Doha agreement included the election of Michel Suleiman as president after the six-month presidential vacuum that followed the end of President Emile Lahoud’s term and after the Lebanese political forces failed to agree on a replacement.

Also among the reasons for Mikati's resignation is the deterioration of the situation in Syria and the oft-heard accusation that Mikati had accumulated a massive financial fortune only because he was supported by Syrian President Bashar al-Assad’s regime since the mid-1990s. It is an accusation that Mikati has always denied, asserting that he is completely independent from what is happening in Damascus. He came up with the “dissociation” policy toward the Syrian crisis in the Lebanese, Arab and UN contexts.

There is also a larger international context for Mikati’s resignation, as it came only days after a statement by the Security Council president with regard to the situation in Lebanon and after a series of Western statements about holding the parliamentary elections on schedule according to any law, even the Doha law. This is something that most political forces in Lebanon reject, including almost all Christians, all Shiites, and a minority of Sunnis and Druze.

So where do we go from here? In principle, according to the constitution, the president should call for parliamentary consultations to appoint a new prime minister who will then be asked to form a new government. But looking at the way the various political forces are positioned, it seems that such a process would be very difficult. Therefore there may be a prolonged government vacuum. Worse, within weeks there may be a parliamentary vacuum as well if the Parliament’s term ends and the Lebanese authorities remain unable to conduct elections.

These two vacuums may also be accompanied by a vacuum in key government posts, starting with the security forces at the end of March, followed by number of security, judicial and government posts afterward. The army commander will reach the age of retirement next September. All that would mean a complete paralysis of the Lebanese state in the event that a new government that can fill the empty government posts is not formed.

At that point, Lebanon may enter a state of complete chaos and be branded a failed state, as it was before the 1990 Taif Agreement. Note that that agreement came as a result of a Cabinet, parliamentary and presidential vacuum that lasted about 25 months and was punctuated by wars and complex internal and external events.

So, the equation has become clear. The resignation of Mikati’s government has put Lebanon at a crossroads. That may pressure the Lebanese political forces to agree on restoring the state’s institutions according to a comprehensive deal that includes a pact on an election law, a government that would supervise the elections and conduct them within six months at the latest, and an agreement on the government that will follow the elections. That would allow Lebanon to overcome the explosive situation in the region until at least May 2014, when the president’s mandate ends.

The second possibility would be a spreading power vacuum that may lead to the deterioration of the security and military situation.

It would be the third vacuum in Lebanon’s contemporary history. The first was between the years 1988 and 1990 and ended with the Taif Agreement, which was a significant change in the Lebanese system. It modified its constitution and re-distributed power among the sects. The second vacuum was between October 2007 and May 2008. It ended with the Doha agreement, which kept the current constitutional order but redistributed parliamentary and Cabinet shares. Today, Lebanon seems on the brink of a third vacuum. Will Lebanon go toward a “new Taif” or a “new Doha”? It seems like a complicated question, especially in light of the inability of Saudi Arabia, Qatar and all capitals, near and far, to play the role of neutral intermediary as a result of the alliances created by the Syrian crisis. But will the Lebanese people play that role themselves this time?