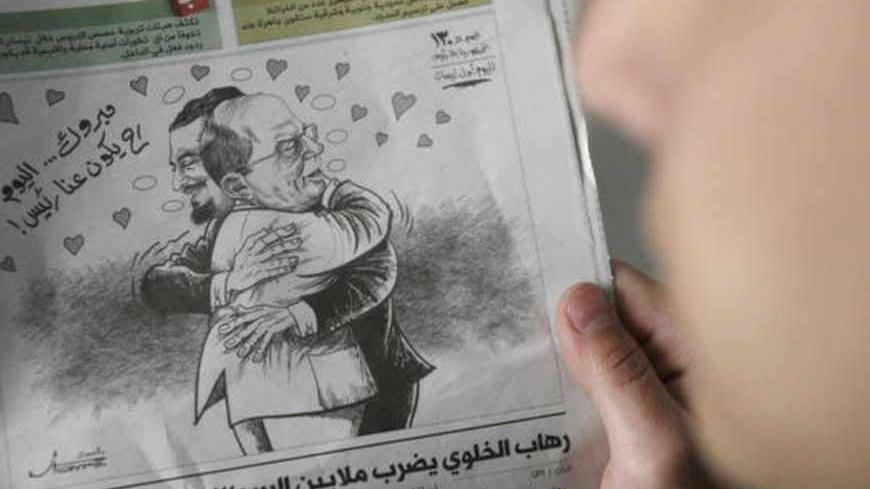 A Lebanese man looks at a caricature in the newspaper al-Balad showing anti-Syrian majority leader Saad Hariri and opposition leader Michel Aoun hugging and congratulating each other for the "election of a Lebanese president," in Beirut, April 1, 2008. - RAMZI HAIDAR/AFP/Getty Images

Lebanese political art suffered a severe blow with the death of Lebanon’s leading caricaturist, Pierre Sadek, on Wednesday morning, April 24, following a long struggle with cancer at the age of 75.

Sadek was in love with freedom, as a condition for artistic creativity. He clung to it in all the institutions for which he worked. Freedom is perhaps the most important thing that will remain of his memory. Among his journalist friends, Sadek was known for his spirit of constructive criticism and wry humor, which helped him build bridges of understanding and affection.

Many times during the modern history of Lebanon, officials, politicians and prominent pundits considered Sadek’s stances, which he expressed through drawing, to be a reflection of local public opinion.

Sadek was rightist, advocating the traditional idea of Lebanon, which the Lebanese Christians — the people of the countryside in particular — have inherited. He was from the city of Zahle in the Bekaa Valley, but lived most of his life in Beirut and the nearby mountains of Hazmiyeh and Broumana.

It should be noted that all the politicians and leaders he supported, defending them while attacking their opponents, have preceded him in death, whether of natural causes or by assassination. These include Raymond Edde, Camille Chamoun, Bashir Gemayel and Rafik Hariri, among others.

Naturally, those whom he used to criticize constituted “the opposite side” of the political game, such as the Nasserites, the Palestinian organizations and the Syrian leadership, as well as their Lebanese allies during the civil war (1975–1990). He also criticized the Lebanese authorities, who allied with the Syrian regime to rule Lebanon under what has later become to be known as the “guardianship system.”

During recent years, however, Sadek focused on Hezbollah, insisting on drawing caricatures of Secretary-General Hassan Nasrallah, despite being threatened on Facebook over it. Nevertheless, his favorite subject in his last years was Hezbollah’s ally, Gen. Michel Aoun. Sadek never tired of depicting Aoun as an angry orange, in reference to the logo of Aoun’s Free Patriotic Movement.

Sadek is a graduate of the Lebanese Academy for Fine Arts, which was the first school for painters in Lebanon.

Sadek embarked on his career at the beginning of the era of then-president Fouad Chehab, following the events of 1958 between the opponents and supporters of the rule of former president Camille Chamoun. He first collaborated with al-Sayyad magazine, which was owned by the founder of al-Anwar newspaper, Saeed Freiha.

Freiha was a supporter of late Egyptian president Gamal Abdel Nasser, and was upset by Sadek's adamance on drawing him in an ugly way.

“I am caricaturist, not a photographer,” said Sadek once, when Freiha expressed his objection to one of Sadek’s drawings of Nasser.

After al-Sayyad, Sadek moved to An-Nahar newspaper, where he added luster to newspaper’s timid opposition approach, which was based on the policy of its own Ghassan Tueni. Tueni was repeatedly imprisoned due of his political positions; however, he later ended up taking the reins of many ministries.

Tueni embraced Sadek, devoting the last page of the newspaper to his cynical and sarcastic drawings, which were more expressive than the rest of the newspaper's news and comments.

The regime that was, at the time, controlled by the intelligence service (known as the "second office" back then) was vexed by Sadek’s drawings during the reigns of Chehab and his chosen successor, Charles Helou, who disappointed him.

On the other hand, Sadek’s drawings, which depicted his opponents in a way that they did not appreciate, served as an additional weapon for the opposition forces to turn the public opinion against Chehab’s rule, which was on good terms with Nasser and his movement in Lebanon, Syria and the rest of the Arab world.

The "second office" tried to draw Sadek to its side through attractive offers, as he later recounted. The office also attempted to intimidate him through summons and investigation, but to no avail, for the status of Ghassan Tueni and An-Nahar as a symbol of the defense of freedom provided a sort of immunity for their employees.

In 1968, the opposition won in the parliamentary elections, especially the “triple alliance,” which included mainly Maronite leaders such as Chamoun, Gemayel and Edde.

In the 1970 presidential elections, this alliance won again as Suleiman Franjieh took the presidency, defeating his opponent Elias Sarkis, who would be later on elected president during the civil war in 1976.

Sadek followed up on all these events through his daily work at An-Nahar, when its headquarters were still on Hamra Street, in West Beirut, as it used to be called during the war. This region was controlled by Palestinian groups (the PLO) and their allied organizations: the leftist and Islamic “National Movement.”

Sadek lived in the Christian part of Beirut. At that time, he moved to work with al-‘Amal newspaper, which was affiliated with the Kataeb Party and whose editor-in-chief was Joseph Abu Khalil. He was enthusiastic about Gemayel’s political project to rule Lebanon. However, Gemayel was assassinated soon after he was elected president.

Amin Gemayel, Bashir’s brother, succeeded him as president. Nevertheless, Sadek criticized his policy and took the side of Bashir’s friends in the Lebanese Forces against Amin in the conflict over the Christian leadership.

Afterward, he worked with al-Joumhouria newspaper, where he aroused the ire of the next president Gemayel, depicting him as a bird after depicting all other Maronite leaders as monks. When the newspaper shut down, he went to work at the Lebanese Broadcasting Channel (LBC), the first private television station in Lebanon, which was established by the Lebanese Forces (LF). Sadek was supported by LF head Samir Geagea, which helped his caricatures, or rather his political drawings, to become a common sight in every house in Lebanon. Lebanese viewers watched his political satire broadcast on the LBC following the nightly 8:30 news bulletin.

However, Geagea was imprisoned in 1994, four years after the war ended. This is when the Lebanese-Syrian security apparatus took hold of the media outlets, which forced Sadek to leave the LBC in 2002, after 16 years of continuous work. He then went on to work at Future TV, which was owned by late prime minister Rafik Hariri, according to Sadek himself.

It should be noted that Sadek returned to An-Nahar in 1992, two years after the war ended, at the request of Tueni, only to leave it again two years ago to publish his drawings in al-Joumhouriya when it re-opened. He continued working in these two institutions until he died from his illness.

With his dying breath, he defended freedom as he perceived it and the people’s right to deride anyone, making history in this small country.