Iran says the couple arrested in Belgium for an alleged bomb plot are members of the group they were attempting to bomb. 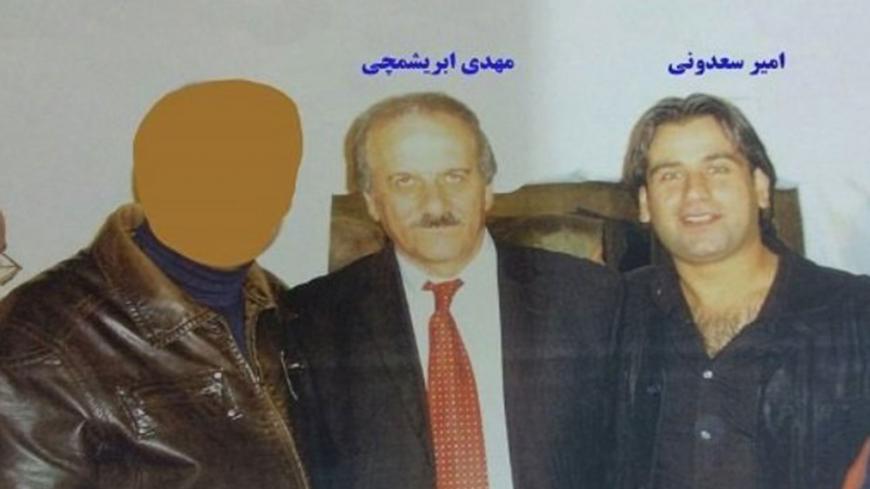 A picture that has been widely shared on Iranian media purports to show a Belgian man of Iranian origin, Amir Sadouni, with a high-ranking MEK member. - Twitter/@AliR_Ahmadi1

As President Hassan Rouhani embarked on a European trip to salvage the nuclear deal, news broke that a Belgian couple of Iranian origin had been arrested for allegedly planning to attack a Paris gathering of a dissident group working to overthrow the Iranian government. Iran has not only denied the allegations but claimed that it was a “false flag” operation and that one of the arrested individuals is actually a member of the group he allegedly attempted to attack.

After media sources released the names of the arrested couple, various Iranian media outlets published pictures of the male suspect, Amir Sadouni, at rallies of the Mujahedeen-e-Khalq organization, often referred to as the MEK, the very group he was allegedly planning to bomb. The group was on the US terror list until lobbying efforts had them removed in 2012 by the Barack Obama administration. The group fought to overthrow Mohammad Reza Pahlavi’s monarchy but lost in an internal battle with the Islamic Republican Party and eventually joined forces with Iran’s archenemy Saddam Hussein, resulting in their general disdain among the Iranian population.

Iranian media showed pictures of Sadouni not only at MEK rallies but alongside Mehdi Abrishamchi, an MEK leader and the former husband of the MEK’s current leader, Maryam Rajavi. Iranian media said that given the timing of the arrest — before Rouhani’s trip to Europe — and reactions by Israeli and American leaders, the bomb plot was clearly devised with an anti-Iranian agenda.

On July 5, Israeli Prime Minister Benjamin Netanyahu hinted that they had a role in the bomb plot being unsuccessful. “It was no coincidence that this attack was thwarted,” Netanyahu said. He then called on Europe, which is trying to keep the Iranian nuclear deal alive, to take harsher measures against Iran.

The Iranian couple was reportedly arrested in Belgium with explosives. An Iranian diplomat in Austria was also arrested alongside an unidentified man in France. Iran has demanded the release of their diplomat. Bahram Ghassemi, spokesman for Iran’s Foreign Ministry, said that Iran has summoned the ambassadors of France and Belgium and the charge d’affairs of Germany over the continued detention of their diplomat, whose name has not yet been released.

Iran’s Foreign Minister Mohammad Javad Zarif also tweeted that the timing of the arrests was suspicious but said that Iran would cooperate with the investigation. He tweeted, “How convenient: Just as we embark upon a presidential visit to Europe, an alleged Iranian operation and its ‘plotters’ arrested. Iran unequivocally condemns all violence and terror anywhere, and is ready to work with all those concerned to uncover what is a sinister false flag ploy.”

Ghassemi also said that Iran is ready to cooperate. He said that the couple arrested are “well-known members” of the MEK and that they have the documents and paperwork to prove it. He called the plot a “scenario that was planned in advance” to harm relations between Iran and Europe.