Egypt’s parliament recently approved a draft law granting senior commanders of the armed forces ministerial and presidential privileges while allowing them to enjoy special immunity both in Egypt and abroad. 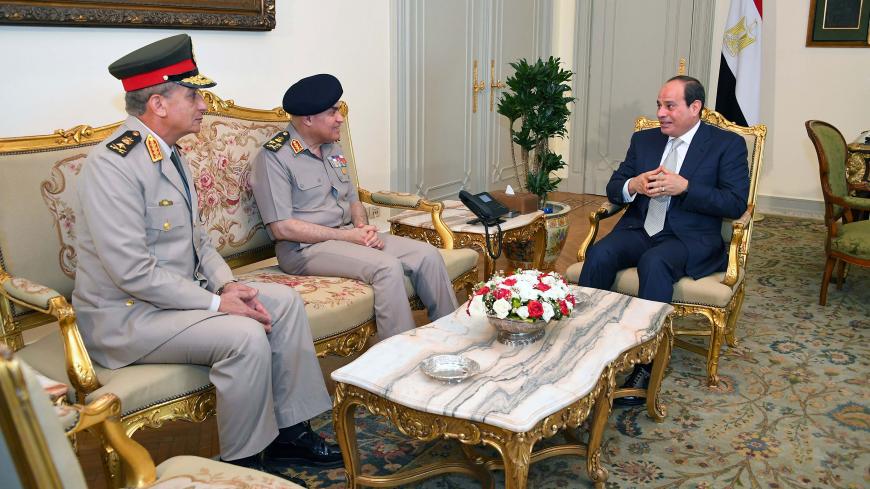 The draft law grants many unprecedented privileges to these commanders and gives the president of the republic the power to summon these commanders to serve the armed forces for life. It also grants those appointed by the president privileges and rights that are usually prescribed for ministers, and it allows them to enjoy diplomatic immunity when traveling abroad similarly to heads and members of diplomatic missions.

The draft law sparked controversy, as it failed to set a criterion for the selection of those senior commanders and gave President Abdel Fattah al-Sisi alone the power to select them.

The draft law says that except with the permission of the Supreme Council of the Armed Forces, no judicial action shall be taken against any of the subjects of the draft law for any acts they committed while the constitution was disrupted, from July 3, 2013, until the parliament started exercising its duties on Jan. 10, 2016.

Of note, the Egyptian Constitution was disrupted following the armed forces’ ouster of former Islamist President Mohammed Morsi in the wake of mass demonstrations that broke out on June 30, 2013.

In this context, the bill sparked a legal and political debate about its constitutionality, timing, purpose and implications.

Member of parliament Haitham al-Hariri, a member of the 25-30 opposition bloc, told Al-Monitor, “Any bill can have pros and cons, but this one only brings benefits to Sisi, as it gives him the right to recall senior commanders in the armed forces into duty until their death. This would prevent such commanders from submitting their candidacy for upcoming presidential elections, similarly to what happened with Lt. Gen. Sami Anan, who was excluded from the 2018 presidential race after the Egyptian authorities denied him permission to run for the elections.”

“The armed forces are already providing their members with a great deal of financial, health and moral privileges. And while senior commanders of the armed forces do not need additional financial privileges, the bill has gone so far as to grant them privileges otherwise prescribed for ministers,” he said.

“The draft law entrenches the idea that there are immunized citizens who are above the law. It is as if the president is implicitly declaring that these leaders have committed violations that deserve criminal trials both inside and outside Egypt,” he added.

He pointed out that, similar to ambassadors, senior commanders in the armed forces are to enjoy diplomatic immunity when traveling abroad and are to be treated like heads and members of diplomatic missions.

Hariri said that this bill is rejected by the people, and had it not been for the current parliament, the current majority and the current political climate, it would have been impossible to approve such a draft law. After protests subsided and the civil forces disappeared, Sisi led the country alone as he appointed heads of judicial departments, dismissed heads of supervisory bodies and appointed agencies responsible for the media and the press. Egypt, he added, is now governed by one person who controls everything, and this is contrary to the basic rules of democracy.

Many political analysts agree that the current parliament, which was elected following the June 30 demonstrations, is actively influenced by instructions from the security establishment, which infers the lack of independent legislation, a basic rule in any democratic country that guarantees the principle of separation of powers.

Hassan Nafaa, a political science professor at Cairo University, expressed to Al-Monitor his anger at this bill and said, “Such draft laws can only be issued by authoritarian regimes. The criterion for selecting and recalling senior commanders into duty is yet to be specified. The only point that has been made clear is that Sisi will be selecting these commanders. He who can issue such a bill and grant lifelong privileges to a group of people can by the same token amend the constitution and grant himself lifelong powers.”

Nafaa continued: “Such draft laws widen the rift between the armed forces and the rest of the population. Sisi's bias toward the army, the police, the judiciary and the [members of parliament] is evident. While these are showered with social and health benefits, the rest of the population continues to grapple with financial, social and health hardships as a result of the economic decisions taken by Sisi. Chief among these is the lifting of fuel subsidies and the increase in the prices of government services such as electricity, water, communications and transportation. This infers clear confusion on the part of Sisi, who lacks political experience and is one of the military commanders who never took part in any military operation.”

For his part, Mohamed Anwar Sadat, the head of the Reform and Development Misruna Party, told Al-Monitor that the bill has raised questions about whether these officials carrying out their duties, defending the homeland and fighting extremism and terrorism requires recognition, privileges, immunization and a binding law.

Sadat wondered whether the people who went through terrible ordeals don’t deserve recognition, and he said the bill features a sense of courtesy to some leaders. He asked whether there is a real need to immunize some commanders both inside and outside Egypt against what they committed during the 2013 Rabaa massacre when the constitution was disrupted.

He added that if the bill was issued to pay tribute to the national role played by these commanders, then why shouldn’t senior leaders at the Ministry of Interior be granted similar treatment in light of their role in protecting the homeland?

The party head wondered why only senior commanders are being honored without the families of martyrs who sacrificed their lives for the homeland and without the junior leaders who include officers, noncommissioned officers, soldiers and retired officers.

Ahmad al-Awadi, a member of the parliament’s National Security Committee, told Al-Monitor that the bill grants senior commanders of the armed forces the most basic privileges they could be offered, as these commanders risked their lives in the June 30, 2013, revolution. Had this revolution failed, they would have lost their lives and exposed their families to torture. Had they not provided support for this revolution, he said, Egypt would have been a war-ravaged nation.