The Shiite Iraqi National Alliance is to propose legal immunity for the Popular Mobilization Units, but Sunni blocs in parliament are likely to object to the proposal. 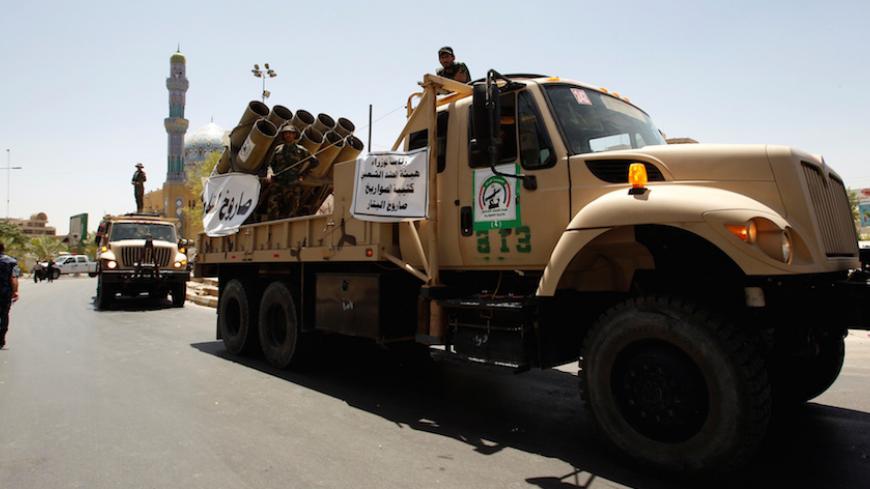 Vehicles of the Popular Mobilization Units take part in a military parade in the streets of Baghdad, July 12, 2016. - REUTERS/Khalid al Mousily

BAGHDAD — The Popular Mobilization Units (PMU) do not hold any legal status in Iraq, with the exception of the Council of Ministers’ decision July 25, which considers the PMU a force working in parallel with the counterterrorism department at the Ministry of Interior. This means that anti-PMU parties or individuals can still press charges against some PMU elements. Therefore, the Shiite Iraqi National Alliance has been seeking to pass a new law it calls “PMU legal immunity” before battles against the Islamic State (IS) come to an end.

The proposal was put forth by parliament members in the Security and Defense Committee along with former Justice Minister Hassan al-Shamari.

During a press conference Sept. 18, Shamari requested that the largely Shiite PMU “not engage in battles and fighting in IS-controlled cities until said law is passed,” warning against “possible accusations of breaches against them following the liberation of some cities from IS clutches by the same groups who demanded they intervene to expel the terrorist group.”

Iskandar Watout, the deputy head of parliament’s Security and Defense Committee, told Al-Monitor, “About 70 parliamentarians have signed the draft bill on legal immunity for PMU elements, whereby they would be treated on a legal par with any soldier in the Iraqi army.”

He said, “This immunity would define the rights and obligations of the PMU members and would consider their participation in the fighting against IS as ‘legal and official.’”

Watout added, “The immunity law would also guarantee the financial and legal rights of the security forces elements in the ministries of Interior and Defense.”

As per Article 63 of the 2005 Iraqi Constitution, only members of parliament are granted diplomatic immunity, whereby they are entitled to express their views during parliamentary sessions without being subjected to litigation before courts or being apprehended.

Legally speaking, legal immunity means exempting certain individuals from certain obligation or liability, such as the application of general rules in judicial and criminal manners. Legal immunity is granted to parliamentarians at home and diplomatic figures during missions abroad. This means that such diplomatic figures would be exempted from the governing law in the state they are dispatched to in case of any criminal charges against them.

However, according to Haider Abdul Sahib, a member of parliament for the Rule of Law Coalition, the immunity law has its own legal justifications. Abdul Sahib told Al-Monitor, “PMU members need the immunity law in light of the delay in passing the law on preventing any possible litigation against them, as they ought to receive the same treatment as any member of the security institutions at the very least. This issue is the prerogative of parliament.”

“The security forces of the ministries of Interior and Defense do not represent themselves, but the ministry and the government. The PMU forces are elements that have volunteered to fight against IS without any financial and legal guarantees; hence, it falls upon the legislature to secure their legal rights,” he added.

In contrast, the parties opposing the draft bill to this effect believe it is anti-constitutional and a violation of the law. Hamid al-Mutlaq, a member of parliament for the Sunni Union of Iraqi Forces, is one of the advocates of this view. Mutlaq said that granting PMU forces and elements immunity would be a dangerous step “threatening the national security and [coexistence among Iraqis].”

“Legal immunity is not even granted to security forces in the police and the army, so how would it be granted to the PMU, especially with the large numbers of people affiliated [with] the group?” he told Al-Monitor.

“We cannot deny that a lot of factions within the PMU have made sacrifices for the homeland, with many martyrs having died in liberating IS-controlled governorates. However, some of the members remain undisciplined and provoke matters and seek reprisals, violating human rights,” Mutlaq said.

He added, “All individuals should answer to the law, whether or not they belong to security institutions. If anything, a protocol or bylaws ought to be set to organize the work of the PMU, whereby they would be punished for any violations instead of resorting to an alien law, i.e., the immunity law for the PMU.”

Many PMU members have recently been apprehended in Europe on terrorism charges, most recently in Austria, where the security forces on Sept. 20 arrested some elements belonging to the PMU-affiliated League of the Righteous on the grounds of being part of a terrorist group.

In this context, the immunity law seems more directed at protecting PMU elements abroad so that they will not be arrested outside Iraq.

The PMU members are practically part of the general command of the armed forces and therefore need a law to further legalize their status rather than an individual immunity law, observers say. This is especially true since no lawsuits have been brought against its members inside Iraq and it is unlikely that this will happen in the future.

The immunity draft bill could also be a response to the report of the Office of the United Nations High Commissioner for Human Rights and the United Nations Assistance Mission for Iraq on Aug. 1 on what it called violations and breaches of the international human rights law and international humanitarian law on the part of Iraqi security forces and their affiliated forces, including the PMU and peshmerga forces.

In any case, it is expected that a law regarding the PMU will pass, especially since a more powerful PMU — with its increased numbers and advanced weaponry — will emerge at the end of its fight against IS in Iraq. The pertinent question, however, is what form will the law take? Will it be a diplomatic immunity law that will be passed to the dismay of the opposing Sunni parties? Other question marks hover over this issue: Will the PMU be annexed to the ministries of Defense or Interior? Or could the PMU join the National Guard that possibly may be finally formed? All of these questions are likely to be answered following the end of the upcoming battle of Mosul, which will shape the country’s new phase after the city's liberation from the clutches of IS.