Russia is reserving judgment but also keeping a close eye on an agreement between Turkey and the United States regarding the Kurdish People’s Protection Units in Manbij, Syria. 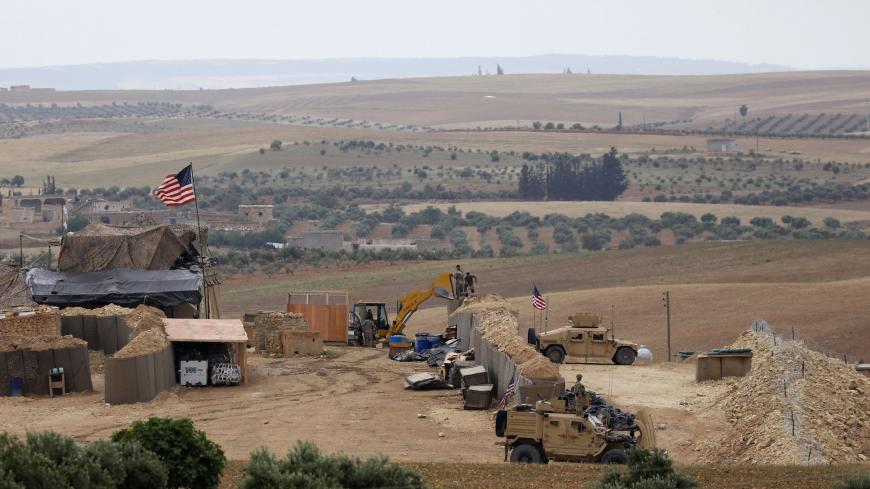 A picture taken on May 8, 2018, shows vehicles and structures of the US-backed coalition forces in the northern Syrian town of Manbij. - GETTY/Delil Souleiman

MOSCOW — Turkey and the United States have agreed on a plan for the People's Protection Units (YPG) to leave the northern Syrian city of Manbij. Ankara has long sought to control the territory but couldn’t make a move because of US support for the Kurdish militia.

Al-Monitor reported earlier that many in Washington interpreted the deal as an effort to re-establish America’s partnership with a key NATO ally. It came as no surprise that NATO’s senior leadership quickly endorsed the agreement.

Damascus, however, made it clear that the deal is unacceptable to the Syrian government. Days before the United States and Turkey announced the Manbij agreement, Syrian Foreign Minister Walid al-Muallem warned, “Neither Turkey nor the US has the right to negotiate the [fate of] Syrian cities.”

Russia has been closely observing the situation in northern Syria for many months as one of the three major themes in the Syrian conflict, along with developments in the south, where Moscow is trying to negotiate a modus vivendi for Israel and pro-Iranian forces, and in eastern Syria, where the presence of the US-backed Syrian Democratic Forces is seen as a next big issue for Russia’s policy on Syria.

The news about the United States and Turkey striking a deal raised mixed feelings in Moscow. Many in the Russian policymaking community who are traditionally wary of Turkey pointed to Ankara’s dealings with Americans as justification of their caveats against partnering with Turkey. To make the perception worse, the agreement with the United States on Manbij was followed by the Turkish foreign minister’s critical remarks on what is arguably Russia’s most sensitive foreign policy issue: Crimea.

On June 8, shortly after visiting the United States, Foreign Minister Mevlut Cavusoglu spoke at a reception of the Association of Culture and Aid to Crimean Tatars. He urged “some European countries” not to forget Russia’s annexation of Crimea from Ukraine in 2014.

"We will never forget about what happened in the Crimea, never. … We remind [Europeans] that if you now forget about the Crimea and tomorrow something [else] happens in Ukraine, you will be responsible for this," Cavusoglu stated in the presence of his Ukrainian counterpart, Pavel Klimkin, along with a leader of the Crimean Tatar people, Mustafa Dzhemilev, who is considered an outlaw in Russia.

Cavusoglu added that Turkey “will never forget that Crimea is part of Ukraine" and will continue to the capital, Kiev. He promised an agreement soon on establishing a free-trade zone between the two countries.

While Turkey’s position on Crimea has been consistent since 2014 and should barely come as a surprise, the very momentum for the remarks fueled the fire of Moscow’s critics of Turkey.

Another concern is whether Turkey will remain a committed partner to Iran and Russia in the Syrian peace negotiations they organized in Astana, Kazakhstan, now that Turkey’s “zone of interest” in northern Syria is virtually ensured.

Ankara’s precarious future in Syria before its alignment with Moscow and Tehran for the Astana meetings in early 2017 has gradually transformed into serious, quasi-institutionalized influence on the ground.

Turkey’s tensions with Washington over the Kurds — exacerbated by other bilateral matters and Trump’s decision to relocate the US Embassy in Tel Aviv to Jerusalem — have long raised worries with some, and hopes with others, that NATO’s solidarity with Turkey was crumbling.

While disagreements with the United States on some issues remain strong, and links among the Astana guarantors are being tested on a daily basis, today’s Turkey appears to be a more confident player in Syria.

For now, Ankara seeks to maintain a careful balancing act between Russia and the United States to keep promoting its own agenda. Turkey’s geopolitical situation is such that it “shouldn’t actually [be asked] to choose between this country or that country,” Cavusoglu told PBS News Hour on June 4. “We have good relations with Russia, but the US is our strategic ally.”

It’s not an either/or situation, he added.

Yet as past instances show, Turkey’s leadership is often prone to emotional moves, and its decisions tend to be clouded by immediate needs rather than strategic choices. Moscow wants to see whether the deal with the United States will go beyond Manbij, as Ankara apparently hopes, and whether it hurts Russia’s policies in Syria.

Addressing the US-Turkey deal, a senior diplomat at the Russian Foreign Ministry told Al-Monitor on condition of anonymity, “Russia’s position is rather neutral. [Turkish President Recep Tayyip] Erdogan needs the deal primarily for the sake of [winning] his upcoming election in Turkey.”

He added, “Many issues in the [Manbij] deal remain unclear: How are they going to [discern] who are members of PKK [the Kurdistan Workers Party, which unlike the US, Russia does not consider a terrorist group] and who are not? Who will be allowed to stay and who will get pushed out? How many Turkish observations posts will be established and where? So we’ll see how it goes,” he said.

Another reason why Russia’s official reaction remains rather moderate — unlike that of the expert community — is because the US-Turkey deal is seen as potentially undermining Kurdish confidence in their alignment with the United States. Since Washington is seen as having more commitments than Russia with the Kurdish YPG, Moscow doesn’t feel obliged to mediate better conditions for Kurdish forces in a situation that could damage America’s image as a reliable ally.

Besides, despite Ankara’s apparent feeling of being in the passenger’s seat at the moment, Russia is coming to believe that the many mutually beneficial projects produced by the countries’ rapprochement are going to keep Turkey from taking any overtly hostile steps. Moscow and Ankara still have a lot to accomplish together in Syria, including in Idlib. The June 7 strikes in Idlib province, allegedly by Russian air forces, are a reminder that Moscow’s not averse to going after Hayat Tahrir al-Sham as its “main [military] goal in Syria in 2018.” Russia won’t shy away from using force if it feels the situation in the province is about to spin out of control.

Otto von Bismarck, Germany’s “Iron Chancellor” in the 1870s-1890s, once stated, “Only a fool learns from his own mistakes. The wise man learns from the mistakes of others.” Russia and Turkey certainly feel they are wise enough to not be fooled by each other. But even contemporary history between the two shows there have been enough mistakes — ones that produced crises — to learn from.