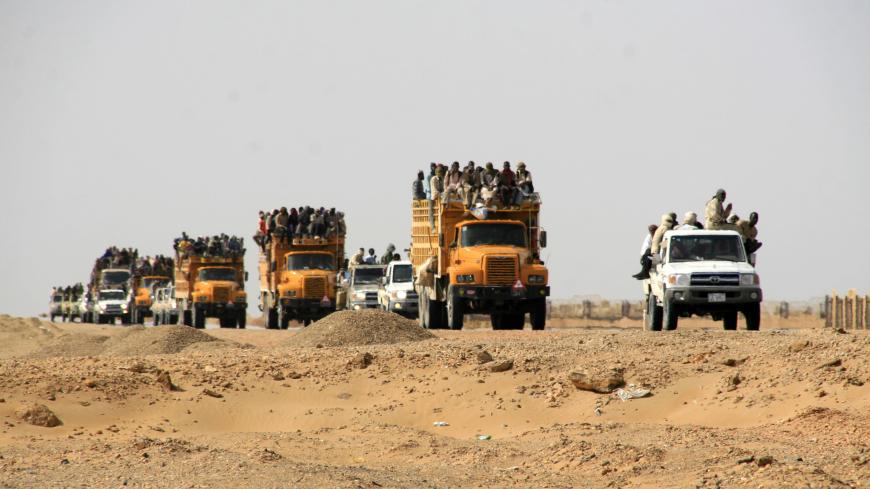 A convoy of vehicles transport illegal immigrants, who were abandoned by traffickers in a remote desert area near the border with Libya, to Dongola May 3, 2014. - REUTERS

On May 31, and away from the glaring media, Libya, Chad, Sudan and Niger signed in the Chadian capital N'Djamena a security protocol to strengthen cooperation among the neighboring countries. The protocol aims to improve cross-border security by targeting transborder criminal activities, particularly human trafficking, arms and narcotics smuggling, as well as the smuggling of goods. Goods are especially smuggled from Libya, where they are subsidized, and then sold at high prices in countries like Chad and Sudan.

The four countries have been cooperating effectively within regional organizations such as the Community of Sahel-Saharan States (CEN-SAD) established by Libya in February 1998. But the challenges this time around are more complicated and far-reaching since the civil war in Libya. CEN-SAD has lost too much momentum and became almost dead after late Libyan leader Moammar Gadhafi, who founded it, was toppled in 2011.

Al-Monitor asked Fathalla al-Jadi, the director of the legal department at the Libyan Foreign Ministry, if the new protocol is adding anything that was not already mentioned in previous agreements, namely within the CEN-SAD framework. He said, “What existed before 2011 is bilateral security coordination within CEN-SAD, but the new protocol responds to today’s challenges, which are different from yesterday’s.”

Indeed, the surge in illegal migration was not a major security issue before NATO intervened in Libya in 2011 to help rebels topple Gadhafi before killing him on Oct. 20, 2011, plunging the country into chaos. Ever since, Libya has been dominated by militias and entangled in its own domestic problems with no effective central government capable of controlling the country’s vast southern borders.

This security vacuum, further exacerbated by the lack of financial means on the part of Sudan, Chad and Niger, left the shared borders with little or virtually no control at all. Different local criminal gangs as well as terror groups took advantage of the border area, using it for all sorts of criminal and terror activities.

The border region in southern Libya — shared with Chad in the south, Sudan in the southeast and Niger in the southwest — has become a security focus of major world powers worried about the repercussions of Libya’s possible collapse and the increase in the smuggling of arms and other contraband. The United States, for example, is building a drone base near the town of Agadez, in northern Niger, close to the Libyan border. This particular border region is known to be the crossroads of extremist groups involved in terrorist activities in Libya, while farther south in Niger on the border with Nigeria, the local terror group, Boko Haram, is roaming the area. When complete next year, the base will be able to monitor a vast harsh desert area. Agadez is a major staging hub for hundreds of illegal migrants heading north to Libya across the uninhabitable Sahara Desert where dozens die every year.

However, the newly signed protocol seems to be a little unfair to Libya because the country is treated equally as its other three partners; Libya is not a source of migration but a transit territory. But Jadi believes the agreement is fair because, for the first time, “those southern countries [Sudan, Chad and Niger] are shouldering the burden of combating illegal migration within their borders before the migrants reach Libya,” he said.

The new protocol includes clear provisions for a practical mechanism to be undertaken by the four countries, which were not part of any previous such agreements. For example, the four countries have agreed to conduct mixed border patrols along their shared borders, which gives them firsthand knowledge of what is really happening on the ground in the harsh desert region. They also agreed to launch a joint operations management center to manage their work, including joint cross-border patrols.

All this will be done within a joint coordination committee in which each country has at least one representative. The committee will be meeting regularly every six months to gauge progress, success and failure. Its next meeting is due to take place in August in the Sudanese capital of Khartoum, Sudan’s Foreign Ministry spokesman Kareeb Allah Khedr said in a press statement.

One particular provision in the latest protocol is of interest and appears unprecedented because it could involve the presence of foreign forces in the region. Article 4 allows signatory countries to seek help from other countries. But Jadi downplayed the issue, saying, “Request for external help only means logistic support and training assistance. It does not mean foreign troops on the ground.”

What are the chances of this deal successfully eliminating transborder trafficking, particularly human trafficking, which has been a major headache for the European Union in recent years? Is the protocol the best way possible to deal with the problem of border security? No definite yes or no can be given as an answer to such questions, as only time will tell. What is definite, though, is that over the last seven years, Libya has been the preferred route for illegal migrants and people trafficking gangs, transporting thousands each year to Europe transiting through the harsh desert south of the country. If this new security deal helps to reduce the numbers, it might then be hailed as a progressive step.

It is too early to judge what impact this new security protocol will have on trafficking, but one thing is clear: Transborder criminal activities in the Sahel region are a huge security challenge that needs international and regional cooperation to tackle. Countries of the region, which are directly affected by the criminal bands, cannot deal with the security problem on their own without further help from the EU and other developed nations.