In the wake of the killing of Chadian President Idriss Deby at the hands of rebel groups, the United Arab Emirates and Egypt agreed on the need to boost cooperation to preserve the stability and security of the Sahel region, while also seeking to counter Turkey's influence. 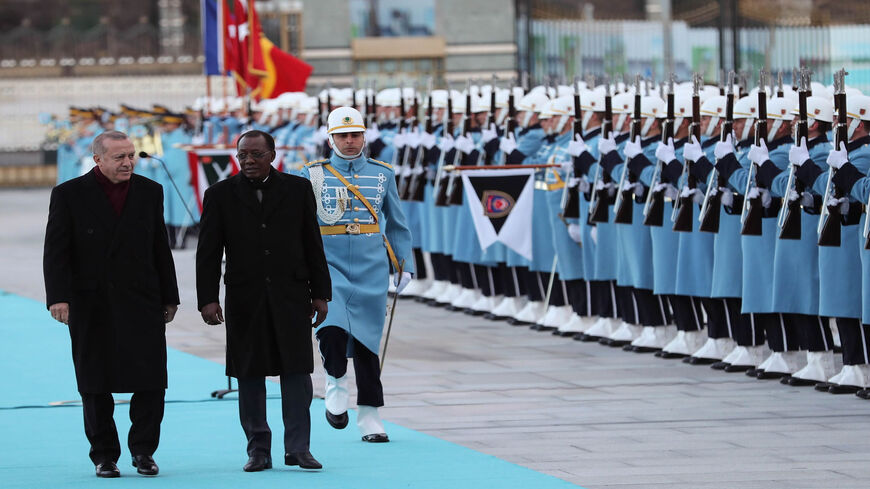 CAIRO — The Emirati Ministry of Defense announced April 25 the start of logistical support flights aimed at boosting the international efforts led by France to combat terrorism in the African Sahel region, in a bid to achieve security and stability in the region.

The Emirati campaign to counter terrorism in the Sahel countries comes after Abu Dhabi Crown Prince Mohammed bin Zayed traveled to Cairo April 24 on a quick official visit, during which he met with President Abdel Fattah al-Sisi.

The two officials agreed to maximize Egyptian-Emirati cooperation and coordination to face the foreign challenges and confront terrorist and extremist activities.

These moves come in the wake of the killing of Chadian President Idriss Deby April 20, on the front line in battles against rebels in the north of the country. Following Deby’s killing, the Chadian army announced the formation of a transitional council that includes a group of its senior officers, while Deby’s son, Mahamat ibn Idriss Deby, was appointed as interim president.

Although the US State Department declared its concern over the developments in Chad and despite the fact that France called for a limited military transition period leading to a “civilian and inclusive government,” the rebel forces said April 21 that they are still pushing toward the capital N'Djamena and that they “categorically reject” the formation of the Transitional Military Council headed by Deby's son.

Meanwhile, Egypt has been intensifying its support for Chad in combating terrorism. On March 1, Egypt’s head of the General Intelligence Service, Maj. Gen. Abbas Kamel, visited Chad as the head of a high-ranking military delegation to discuss ways to combat terrorist organizations.

On March 8, Al-Araby Al-Jadeed newspaper cited sources as saying that Kamel had visited Chad twice in February, met with officials there and reiterated Egypt’s readiness to raise the level of its security and military services by organizing military training exercises and offering donations to the Chadian military.

The sources said that the main reason behind the new Egyptian steps are the Egyptian intelligence reports indicating that Turkey is deploying efforts to penetrate the countries of the African Sahel.

Hiba al-Bashbishi, a professor of political science at the Institute of African Studies and Research at Cairo University, told Al-Monitor that there are major concerns over the Turkish incursion into the Sahel countries and its support for militias and rebel groups in the region in a bid to implement President Recep Tayyip Erdogan’s expansionist ambitions.

She said that Egypt and the United Arab Emirates (UAE) have a strategic alliance and share the same concerns regarding the Turkish incursion into the region amid the growing role of armed groups, which led to the killing of the Chadian president.

On Feb. 15, the UAE took part in the seventh ordinary session of the G-5 Sahel Summit in N'Djamena, and reiterated its commitment to cooperation in order to achieve stability and security in the region.

Also, the UAE participated March 19 in the second ministerial meeting of the Coalition for the Sahel, and announced its support for security and stability, development and humanitarian efforts in the region.

On March 5, Egyptian Minister of Health and Population Hala Zayed said that Egypt helped Chad cope with the coronavirus crisis as it provided medical support to Chad by providing free treatment to Chadian citizens, conducting convoys in the field of ophthalmic surgeries and bringing in Chadian specialists for training in hospitals run by the Egyptian Ministry of Health.

On March 10, Egypt announced its intention to sign an agreement between Egypt, Libya and Chad to establish a new road that would link the three countries and open an outlet for Chadian products to the Egyptian market.

Bashbishi said that Turkey perceives Libya as a gateway to the countries of the Sahel and has sought to support the new unity government, all the while refusing to expel the militias loyal to it because it uses them to cross from Libya through the southern border to Chad and then to the Sahel region.

Despite international calls to expel foreign militias and mercenaries from Libya, the Syrian Observatory for Human Rights reported April 8 that a new batch of 380 mercenaries has been deployed to Libya over the past few days.

The Hafryat website published a report April 22 citing high-ranking Libyan security sources as saying that an armed batallion of the Chadian opposition guerrilla led by Hassan Musa al-Tabawi, who is supported by the Muslim Brotherhood and Turkey, was involved in the attack on the Chadian president.

On June 25, 2020, the spokesman for the eastern-based Libyan National Army, Maj. Gen. Ahmed al-Mismari, said that Turkey was still trying to infiltrate into a number of African countries, such as Niger and Chad, as well as the Horn of Africa.

On March 12, 2020, Mohamed Idris, Egypt’s permanent representative to the United Nations, expressed his country’s concern over the recruitment and transfer of foreign fighters from Syria to Libya, describing the move as a blatant violation of international peace and security.

Bashbishi said that Turkey has exploited poverty, famine and internal conflicts and has succeeded in penetrating the Sahel countries from several angles in a bid to support the rebels in Mali, Chad and Niger. It also offered, according to her, economic support and humanitarian aid to control the joints of the state and implement its agenda.

On May 26, 2020, the Turkish Ministry of Defense announced the dispatch of a military cargo plane carrying medical aid to Chad to confront the coronavirus crisis.

On July 27, 2020, a Russian website said that the Turkish government had signed a military agreement with Niger, and that it was to announce similar agreements with other countries bordering the Libyan border, such as Chad, as part of attempts to tighten its control over Libya.

On Sept. 4, 2020, Mauritanians gathered in front of the Turkish Embassy ​​to demand that Turkey put an end to its ongoing support for militias and extremist groups in the country. The demonstrators called on Turkey to refrain from interfering in the domestic affairs of African countries.

Maj. Gen. Ahmed al-Awadi, undersecretary of the Egyptian parliament’s Defense and National Security Committee, told Al-Monitor that Egypt pays great attention not only to Libya and Chad, but also to the countries of the Sahel region as a whole given their importance for Egyptian national security.

Awadi noted that the Egyptian-UAE alliance came at a crucial time, as the killing of the Chadian president has served as a wake-up call for the need for international action to defeat terrorist groups supported by parties seeking to destabilize the region.

The Egyptian parliament is fully supportive of such efforts, he concluded.