What killing of Chadian president means for Egypt 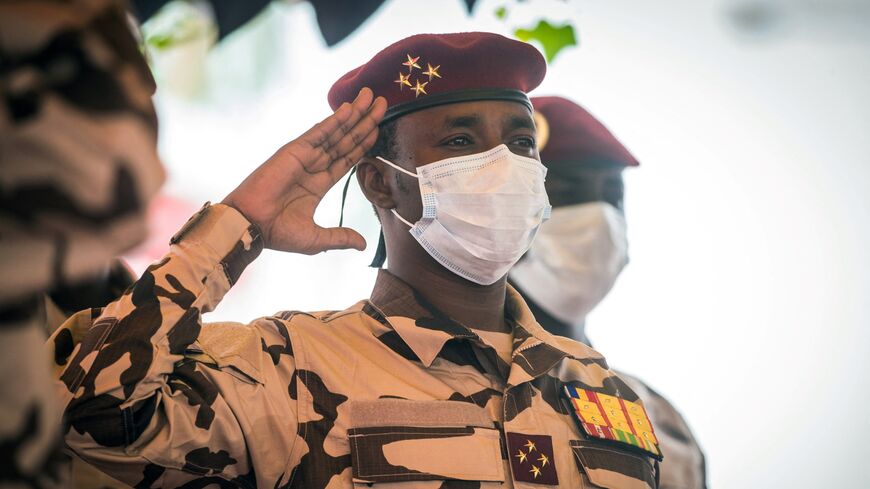 Mahamat Idriss Deby pays his respects near the coffin during the state funeral for his father, Chadian President Idriss Deby, in N'Djamena, on April 23, 2021. Chad staged a state funeral for its slain president, a linchpin in the fight against the Sahel's jihadi insurgency, as France and regional allies voiced backing for his son and successor. The elder Deby, who had ruled the vast semi-desert state with an iron fist for 30 years, died April 19 from wounds suffered fighting rebels. - CHRISTOPHE PETIT TESSON/POOL/AFP via Getty Images

CAIRO — The April 19 death of Chadian President Idriss Deby has raised Egyptian concerns about new security and political challenges Egypt might face in the African Sahel region, as Cairo and N'Djamena have close security relations.

Cairo did not make any official comment on the latest developments in Chad, except for a telegram of condolences from President Abdel Fattah al-Sisi. However, the Egyptian media and analysts close to the government expressed their fear of turmoil in Chad.

In his telegram, Sisi described Deby as “the patriotic and wise leader who gave a lot to his people and his country, and made efforts to serve African causes in the face of various challenges.”

On April 19, Deby died after being wounded on the front line against rebels in the north of the country. The next day, the Chadian army announced a transitional council that includes a group of high-ranking army officers, and Deby’s son, Mahamat Idriss Deby, was chosen as interim president. The son, 37, is a four-star general.

A former adviser to the Egyptian president, Ahmed al-Moslemani, tweeted April 20, “The assassination of the president of Chad is a new threat to Egyptian national security. While some may consider the news to be none of Egypt’s concern, I would like to say that this is not true, as the distance between the Egyptian borders and the Chadian borders is less than the distance between Cairo and Sohag (a southern Egyptian governorate).”

Moslemani’s Twitter thread continued, “Chad suffers from dangerous terrorist organizations whose activities extend across a large area in the Sahel and Saharan countries, from western Sudan to the Atlantic Ocean,” adding, “The absence of a strong president like Idriss Deby is cause for concern, and if international parties had anything to do with the assassination, this doubles the concerns,” referring to the possibility of Libya's extremist movements allying with Chadian rebels under foreign direction, in order to bring about a major change in the region.

There is no common border between Egypt and Chad, but the latter neighbors Sudan and Libya, which makes it an important country for Egyptian national security.

Mohammed Said Mahfouz, an adviser to the editor-in-chief of the government-affiliated Al-Ahram newspaper, told Al-Monitor that Egypt is very disturbed due to the turmoil in Chad, as it comes at a very sensitive time with the escalation of tensions with Ethiopia due to the Grand Ethiopian Renaissance Dam crisis. Mahfouz added, “Any chaos that occurs inside Chad will affect Sudan and Libya, and thus our national security.”

During the last meeting between Sisi and Idriss Deby in December 2019, the Egyptian president praised the close relations between Egypt and Chad, especially in light of the great importance Chad occupies in the African Sahel region, which is directly linked to Egyptian national security.

At the time, Deby expressed his country's desire to develop bilateral relations with Egypt at various levels, especially in the areas of trade exchange, technical support and joint security and military coordination.

Mahfouz added, “Sisi and Deby had had strong security relations in recent years.”

Since Sisi came to power in 2014, Egyptian policy toward Africa has changed; Cairo had paid little attention to the continent since the 1990s. Sisi sought to improve Egypt’s image on the continent and protect Cairo's interests in the Horn of Africa to strengthen its position on the dam issue. However, in the Sahel and Saharan countries, Egypt focused on strengthening security and intelligence cooperation and presenting itself as a model for combating terrorism.

In June 2018, Egypt established a regional counterterrorism center for the Community of Sahel-Saharan States and hosted joint maneuvers. In February 2020, Egypt adopted a proposal to establish a continental counterterrorism force in the five Sahel countries.

Roland Lombardi, a historian specializing in the Middle East, specifically Egypt, and an independent geopolitical consultant associated with the JFC-Conseil analysis group, said Egypt is right to be worried.

“Absolutely, the links between Deby, the father, and Sisi were very strong on the personal level but especially strategic in the African files but once again in that of Libya,” Lombardi told Al-Monitor.

But if Chad regime falls, that could be the end of the "Chadian lock" with all the regional consequences that would ensue, especially for Libya. “The Chad of Deby is the ‘wall’ which blocks and prevents the progression of Islamism and Turkish influence in Africa,” Lombardi said.

Mahfouz said, “Although Deby's regime is repressive and is suspected of corruption, it remained positive and waged an intense and honest war against terrorism. Egypt strongly supports this so the Chadian opposition may see that Cairo worked in secret for a long time to support President Deby in his war against the opposition.”

He added, “Egypt's interest is the survival of Deby's anti-extremism regime, by supporting his son and his military council, then handing over power to a moderate leadership.”

This is why Mahfouz did not rule out the possibility of Egypt making a move behind the scenes by holding meetings, making quick contacts with officials there or sending unannounced official delegations to provide support and advice to the Chadian military council. Egypt will also enhance security on its southwestern borders, he said.

“If the fighters of the Front for Change and Concord in Chad [FACT] … succeed in attaining power or if the political fighting continues there, Egypt will suffer again from the unruly southern Libyan front, and Chad will stand as an obstacle in any African alliance to support Egypt on the [dam] issue,” Mahfouz said.

The FACT is largely backed by Turkey and financed by Qatar with the objective of driving France out of the central Sahel, Lombardi said.

“After the death of his father, Deby's son granted himself full powers. At first glance, he will continue his father's policy and therefore his allies in Cairo will most likely continue cooperation with N’Djamena,” he said.

“Chadian-Egyptian cooperation will obviously be strengthened, particularly in intelligence and possibly on the tactical level, with perhaps attacks on the logistics bases of the Chadian rebels in Libyan territory by [Libyan eastern military commander Khalifa] Hifter’s military forces [that are allied] with Cairo and Egyptian special forces,” Lombardi continued

Mohammed Soliman, a senior associate at McLarty Associates, an advisory firm based in Washington, told Al-Monitor, “The close proximity of Chad to both Egypt and Libya makes Cairo very concerned about the instability in Chad that would cause the flow of arms and terrorists to spill over to Libya and Sudan.”

He added, “Chad is very integral to Egypt's regional vision on countering transnational terrorism in the Sahel. In addition to security, Cairo wants to increase economic cooperation with Chad by establishing a land road linking Egypt with Libya to Sudan to open the door for the flow of trade and services.”

“And indeed, Egypt's increasing presence in Chad could be, in part, attributed to Cairo's efforts to counter Turkey's influence in the Horn of Africa, Sahel and the west of Africa,” he continued.

He said Cairo will likely continue to monitor the situation in Chad and adjust its policy as needed.