The impending dismissal of another 3,000 Turkish soldiers suspected of disloyalty is raising concerns about military readiness. 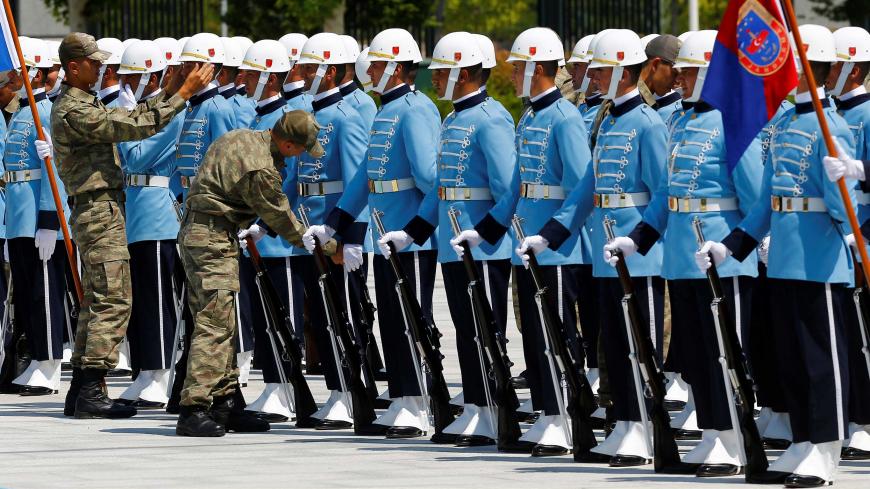 Turkish soldiers help guards of honor get ready for a welcome ceremony at the presidential palace in Ankara, Turkey, Aug. 5, 2016. - REUTERS/Umit Bektas

The Turkish Armed Forces (TSK) are gearing up for a new round of purges, even as they struggle to recover from the initial culling that followed the failed coup of July 2016.

Defense Minister Nurettin Canikli announced April 18 that a secret cell of 3,000 officers and noncommissioned officers (NCOs) affiliated with alleged coup mastermind Fethullah Gulen, a Sunni cleric who lives in self-imposed exile in Pennsylvania, had been identified. All of them, he promised, would be dismissed.

As of May 18, some 550 officers and NCOs had already been arrested. According to government investigators, senior leaders of the so-called Fethullah Gulen Terror Organization (FETO), a term Ankara uses to refer to Gulen followers, have switched to using land lines at markets, kiosks and cafes to avoid detection as they communicate with plants inside the military.

Prosecutors insist that despite the purging of some 10,000 suspected Gulenists in the immediate aftermath of the coup, the group retains a strong presence in the military and is trying to reorganize. The accusations, however, are raising new concerns about FETO’s alleged capacity to burrow into Turkey’s military structure — as well as the armed forces’ ability to cope with a new round of forced departures.

Ankara is tight-lipped about the impact of the purges as it ramps up military operations against the outlawed Kurdistan Workers Party (PKK) and its affiliates in Turkey, Iraq and Syria. But an analysis of government data by Al-Monitor points to worrisome shortages of generals and staff officers as well as elite operators including pilots and Special Forces troops that could be exacerbated by a new round of purges.

The most recent publicly available snapshot of the Turkish military was published in February 2017, after the initial round of purges that began on July 27, 2016. Comparison with figures from March 2016, before the coup attempt, shows a 40% reduction in the number of generals — from 325 to 201 across the army, air force and navy — and a 20% reduction in commissioned officers, from 32,451 to 25,728.

The dismissal of almost 1,400 staff officers (77% of the total) and the abolition of the staff officer system in August 2016 indicates that the officer corps was a prime target for FETO as it sought to gain influence. Staff officers are the most educated and privileged group in the officer corps, and are usually assigned to critical posts at headquarters and given priority in the selection of missions abroad.

The numbers do not include the gendarmerie and the coast guard, which have since been detached from the military command and attached to the Ministry of Interior. Since February 2017, military academies and officer schools have continued to graduate students, with the number of officers now reaching about 27,000 and the NCOs totaling about 67,000. Despite these new additions, however, the totals remain below pre-coup strengths.

Delving into the makeup of the purged forces as of January 2018 offers additional insights.

The most affected group by the purges has been the commanding elite. Out of the 325 generals and admirals in the Turkish army, navy and air force, almost half (150) have been discharged. Among them were two four-star generals, nine lieutenant generals, 30 major generals and vice admirals, and 126 brigadier generals and rear admirals. In all, nearly 44% of army generals, 42% of air force generals and 58% of admirals were formally discharged. An additional 586 colonels were forced to retire by the Supreme Military Council on Aug. 23, 2016.

The most affected officer group are air force combat pilots. The Turkish Air Force (TAF) had almost two pilots for each of the 320 combat planes — including 240 F-16s — before the coup, but the dismissal of 280 pilots reduced that ratio to less than one pilot per aircraft as of September 2017. (The air force also operates 90 transport planes, seven tankers and 105 training planes.) With 400 combat-ready pilots now back on the roster, the ratio is back up to 1.2, but getting back into pre-coup fighting form may take up to three more years of recruitment.

The army's helicopter pilots are in a similar state; about 40 of them have been dismissed. The downsizing has meant a much heavier workload for serving air force and army aviation pilots, who are stretched thin fighting the PKK, patrolling Turkish airspace and conducting cross-border operations. Faster rotation periods, heavier workloads and increased fatigue and stress are the first consequences of the lower pilot-to-aircraft ratio.

Special Forces units such as the navy’s Underwater Assault Unit and the air force Combat Search and Rescue personnel have also suffered a disproportionate number of dismissals. Many of the elite units’ battalion and team commanders were arrested and dismissed from service on charges of participating in the uprising. Similarly, there have been reports of dismissals of numerous helicopter pilots and other officers and NCOs serving in the TAF's elite search and rescue teams. 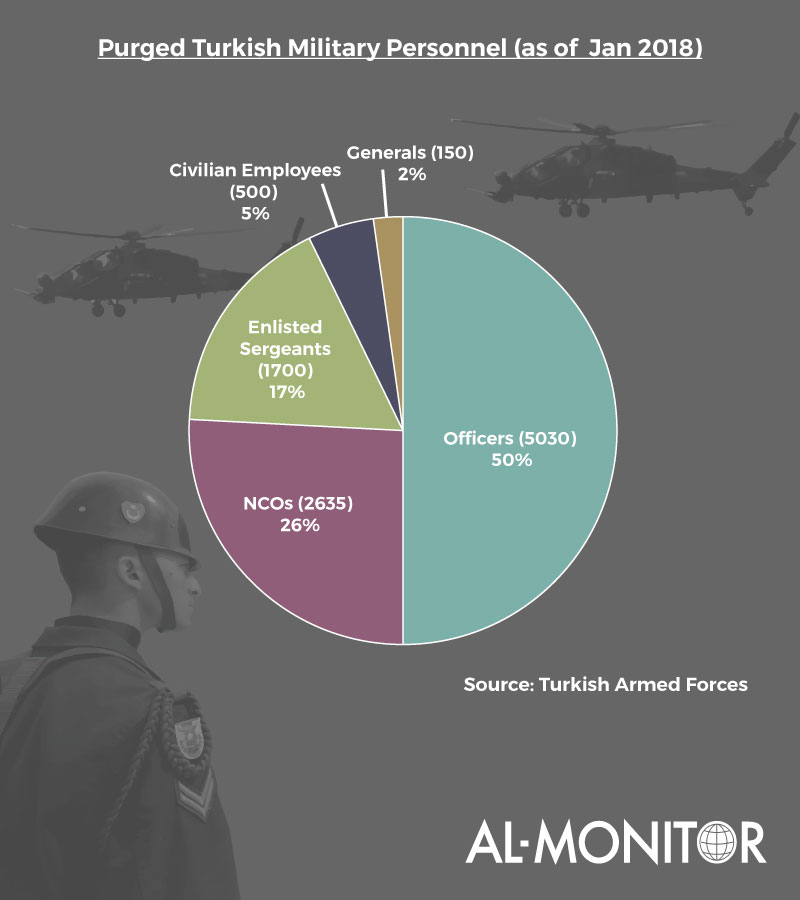 The purges suggest a very focused and deliberate recruitment effort by the Gulenists. The group apparently first sought to gain a foothold in the armed forces’ personnel management system to control promotions and appointments. From there, FETO seems to have targeted the staff officer system in order to infiltrate headquarters; pilots and special operation unit commanders to control the critical military cadres directly related to operational effectiveness; and the military intelligence, judicial and health systems to promote its hidden agenda. As such, purging the upper echelons of the military makes more sense than going after rank-and-file soldiers.

To make up for shortages, the TSK have been attempting to recruit directly from civilian sources. Naturally filling the ranks too quickly with civilians raises concerns about quality, discipline, professionalism and esprit de corps within the military. In addition, hundreds of military personnel who have only been suspended are waiting the outcome of investigations, another factor making the personnel deficiency harder to manage.

In the army, most of the purges are from the general staff and service command headquarters in Ankara, and from corps and brigades in Istanbul and Ankara, as those were the ones that overwhelmingly participated in the July 15 uprising. The Second Army Command in Malatya, which is responsible for combating terrorism in the southeast, and soldiers who served in Turkish operations in Syria have been the least affected so far, with a high probability of being purged later. This speaks to the government’s pragmatic approach to de-Gulenification of the military. Today, about 20 brigades of the Second Army Command are operationally active with new commanders.

The navy has been the least affected service command; most of its dismissals have been from the command offices in Ankara or personnel serving in rear headquarters.

As for the air force, although it seems to be coping with the effects of the dismissals, most of its elite units will need at least three more years to return to pre-coup levels.

After the coup attempt, Turkey established a National Defense University attached to the Ministry of Defense that offers both undergraduate and graduate programs to fill the vacant slots. But these programs are far from adequate to provide the intellectual capital, particularly at the graduate level, that the military needs for its transformation.

Almost two years since the coup attempt, the TSK have yet to fully recover.

One step in the right direction is the English-language War Studies Master’s program that will be offered starting this fall at the National Defense University located in Istanbul’s Levent neighborhood.

The Turkish military has recently been busy with counterterrorism operations both inside Turkey and abroad, including with peacekeeping tasks in Afghanistan and the Balkans, and force projection efforts in Qatar, Somalia, Sudan’s Suakin Island and the Aegean Sea and the Eastern Mediterranean. Meanwhile, its institutions have been strained due to the hasty reforms and ongoing mass purges since the coup.

Several other factors — including inconsistent political directives on military reform, lack of civil-military integration, ambiguity concerning the status of the Turkish General Staff, frictions between the General Staff and the Defense Ministry, and Turkey’s ongoing transition from a parliamentary system to an executive presidency — have aggravated the power struggles and the intellectual capital deficiency within the military. Worse still, all of these institutional challenges coincide with the never-ending crises between Turkey and its Western allies, particularly the United States and NATO.

Of course, if Canikli follows through on his promise to discharge another 3,000 ranking soldiers, the TSK may find it that much harder to establish a golden balance between de-Gulenification and operational effectiveness.