Having coordinated the US repudiation of the Iranian nuclear deal with Prime Minister Benjamin Netanyahu, President Donald Trump has also offered Netanyahu "full and total" US military and diplomatic support in case of a regional war. 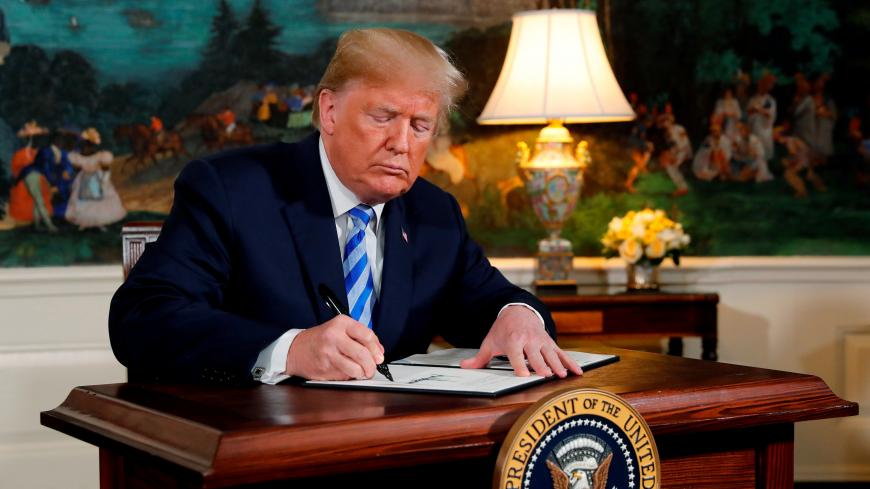 US President Donald Trump signs a proclamation declaring his intention to withdraw from the JCPOA Iran nuclear agreement in the Diplomatic Room at the White House, Washington, May 8, 2018. - REUTERS/Jonathan Ernst

Israeli Prime Minister Benjamin Netanyahu and his associates are applauding the May 8 announcement by President Donald Trump to withdraw the United States from the Iran nuclear agreement.

“There is only one thing that isn’t clear,” one of the people closest to Netanyahu told Al-Monitor, speaking on the condition of anonymity. “That is, who works for whom? Does Netanyahu work for Trump, or is President Trump at the service of Netanyahu?”

From the outside, at least, upon close inspection, it looks like the two men are perfectly in sync. From the inside, this seems even more so. When it comes to the US administration’s recent actions, the people in Netanyahu’s inner circle knew exactly what would happen and when, and they have known it for the past few weeks. No one in Jerusalem was surprised by Trump’s statement. It almost seemed as if the president’s speech had been written in Hebrew and only then translated into English.

“There has always been close coordination between the Israeli and the American defense establishments,” a senior Israeli defense official told Al-Monitor, also speaking on the condition of anonymity. “Intelligence coordination has also gotten stronger over the past few years, but the current story is a whole different ballgame. This kind of cooperation between the two leaders and their two offices — the Oval Office in the White House and the Prime Minister’s Office in Jerusalem — sometimes makes it seem as if they are actually just one single, large office.”

The most recent meeting between the two men took place on March 5, when Netanyahu visited Washington for the annual AIPAC conference. At the time, the Israel Police were busy recruiting Nir Hefetz, a former close confidante and communications consultant, to become the third state witness to testify against Netanyahu in the string of legal cases he confronts. Two days after Netanyahu's meeting with Trump, the prime minister released a video condemning the wholesale recruitment of state witnesses against him, yet again declaring, “There was nothing, because there is nothing.” He ended the video stating, “They will continue doing what they do, and I will continue doing what I do, taking historic steps here on behalf of the State of Israel. Time will tell how important this visit is to Israel’s security.”

While Netanyahu speaks frequently in broad, historical terms, when he posted the video, his associates hinted that this time he really meant it. One can now say with certainty that every step being taken by the United States in the Middle East and also by Israel were coordinated between Netanyahu and Trump at their meeting on March 5. The final security touches were added by Defense Minister Avigdor Liberman, who recently returned from a series of meetings in Washington, most of them at the Pentagon.

This rare type of coordination between Netanyahu and Trump focused on the diplomatic front as part of a combined effort to block the spread of Iran in the Middle East — not just Iran’s nuclear program — and to take down the ayatollahs’ regime. Liberman spoke with officials, chief among them Secretary of Defense James Mattis, about security coordination. At this meeting, they raised various scenarios concerning escalation on various fronts in response to a continuation of the mysterious attacks taking place on Syrian territory on an almost daily basis and generally attributed to the Israeli air force. These scenarios included a local and limited confrontation between Israel and Iran on Syrian territory, a confrontation between Israel and Iran that spreads to include Hezbollah and could bring the whole region to war, and a war between Israel and an Iranian-Syrian-Hezbollah alliance that could lead to Russian involvement in some way or another over the course of events.

Al-Monitor has learned from an Israeli security source that during these discussions, the United States promised Israel full and total support on all fronts. While US support is a given on the diplomatic front — that is, at the UN Security Council and in the international arena — they also spoke about military support. If a regional war does break out, the United States will immediately make its position clear, express support for Israel and send Moscow the right signals. This is to ensure that Russian President Vladimir Putin stays out of the conflict and does not try to intervene, whether directly or indirectly, on behalf of his allies, Iran and Syria. Upon returning from Washington, Liberman informed the prime minister that he had received a “green light” in security matters. The joint US-Israeli plan, which could also be called the Trump-Netanyahu plan, was on its way.

Just moments before Trump began his speech announcing the resounding US withdrawal from the nuclear agreement with Iran, the Israel Defense Forces ordered the opening of public bomb shelters across the Golan Heights. At first, it was announced that this was done in response to intelligence reports of “irregular” movements by Iranian forces and Shiite militias on Syrian territory. It should be recalled that Israel is still waiting for an Iranian military response to the strikes attributed to it over the last few weeks that targeted Iranian objectives in Syria. Even the opening of the bomb shelters, which left Israelis worried, was coordinated between Washington and Jerusalem. In other words, there is no assurance that it took place in response to intelligence warnings.

The night the shelters opened, there was another devastating air attack against Iranian targets in Syria, this time near the town of Kiswah. Once again, the strike apparently targeted a stockpile of rockets and missiles that Iran had moved into Syrian territory, with the goal of firing them at a military target in Israel. Although Israel has not taken responsibility for the attack, based on the way it was carried out, it seems highly likely that it was a preemptive strike by the Israeli air force, intended to prevent an Iranian response.

Trump, in his speech, mentioned Israel’s contribution to exposing Iran’s lies. He was referring to Netanyahu’s April 30 presentation, in which he revealed the Iranian nuclear archive, stolen by Mossad and brought from Tehran to Israel. By now it is clear that apart from all the tremendous political benefits Netanyahu gained from that presentation, it was also intended to give Trump the “home court advantage” in advance of his big announcement on Tuesday. The coordination between the two men does seem perfect. It is closer than any coordination of this sort between the leaders of the United States and Israel.

All said, however, it must be emphasized that the bulk of the work still lies ahead. So far, Netanyahu and Trump have put quite a few miles under their belts, but it is all talk rather than deeds. Trump may speak tough, but he is still moving ahead with his policy of withdrawal from the Middle East. Meanwhile, Netanyahu has so far avoided any real military clashes or adventurism. They still have more than one ordeal ahead and they won’t be easy, as they will now be tested by their actions. These ordeals will determine the fate of their joint plan to defeat Iran.