Has Europe had enough of Netanyahu?

European leaders seem to have come to the realization that Israeli Prime Minister Benjamin Netanyahu can't be taken at his word. 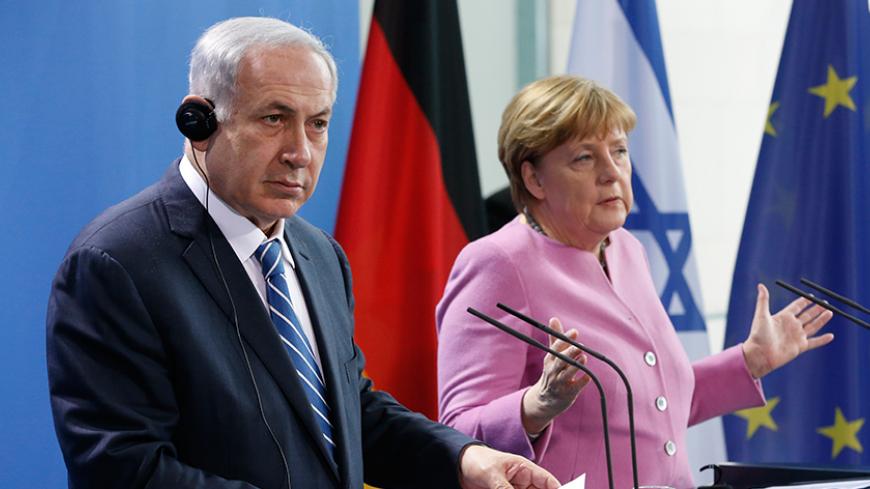 The German newspaper Die Welt covered Israeli Prime Minister Benjamin Netanyahu’s mid-February visit to Berlin, reporting on the fury felt toward the Israeli leader by the circle surrounding Chancellor Angela Merkel. On April 30, it was the magazine Der Spiegel's turn, publishing a report that the German government is in the midst of a change in strategy regarding Israel and that Merkel definitely “understands” why Palestinian President Mahmoud Abbas turned to the United Nations.

Something very bad is taking place in relations between Israel and Germany, Israel's closest ally behind the United States. It is doubtful whether Foreign Ministry Director Dore Gold can improve things radically in the series of meetings he is scheduled to hold in Berlin the second week in May. Thus, following the United States, another important Israeli axis is being undermined, this time in Europe.

Germany is a country that stands at Israel’s side at critical moments. Germany is the country that supplied Israel with highly regarded Dolphin submarines, which according to foreign reports give Israel a second-strike capability should the country be hit by nuclear weapons. Sources in Berlin and Jerusalem are saying that the Germans are now considering a sharp change in policy.

A European diplomat speaking on condition of anonymity told Al-Monitor, “Berlin is beginning to internalize that they can’t get anywhere with Netanyahu, because Israel’s prime minister fooled Israel’s friends and the West over the last seven years when he ‘pretended’ to endorse the two-state solution but actually adopted all possible tactics in order to kill it instead.”

The current article in Der Spiegel focuses on the diplomatic sphere. The report says that Berlin’s Foreign Ministry is preparing for the possibility of an apartheid regime in Israel and that the Germans are considering whether to withdraw the commitment Merkel made to Netanyahu in 2008 in the statement “Israeli security is part of Germany's ‘raison d’etat.’” The weekly reported that German officials believe that Netanyahu abuses this commitment, and that his policies do not contribute to maintaining the Jewish and democratic character of Israel.

Almost as if to prove the Germans' allegations true, on May 2, Justice Minister Ayelet Shaked of HaBayit HaYehudi revealed her priority: She intends to apply Israeli law to Judea and Samaria, that is, to allow all Israeli citizens living in the West Bank to enjoy the provisions of Israeli law. Ostensibly this is a technical, legal action, but it is a harbinger for the beginning of the annexation of the West Bank. Such a process could add fuel to the Berlin fire and lead to an even more lethal chain reaction in Europe in regard to Israel.

In this current state of affairs, new reports are emerging about a renewal of contacts between Netanyahu and Isaac Herzog, leader of the Zionist Camp, on establishing a unity government. In the coming weeks, Netanyahu will find himself more torn than ever between two opposing tendencies: a desire to return to the political center, broaden the government and renew diplomatic negotiations or his current proclivity to sharply turn to the right in a wink to the constituents who kept him in power in the March 2015 elections.

To one extent or another, Netanyahu’s problem with Merkel — as with other European leaders and with the outgoing American president, Barack Obama — is more an issue of personality and credibility than one of policy. One can manage when it comes to Netanyahu’s policy issues. He can be pressured, even pushed, into a corner. What the West finds hard to swallow is Netanyahu’s tendency to tailor reality to his specifications — to create an alternative reality, to make promises he cannot or will not keep, to change his mind, zigzag and not take his partners in Europe and the United States into account.

The February Die Welt report dealt with briefings to the media by Netanyahu’s office. The Germans fumed that Netanyahu and his people reported things to the Israeli media that, they say, were totally fictitious. This is a well-known Netanyahu trait that has persisted throughout his years in office.

A formative event of this type occurred during his first term, in 1996, when Netanyahu’s representative distorted what had transpired in a meeting between Netanyahu and French President Jacques Chirac. According to the version provided to Israeli journalists, Netanyahu delivered an impassioned speech, and “Chirac mainly listened.” According to the minutes of the conversation, the opposite was true. Chirac was the one to “let it all out” while Netanyahu mainly did the listening.

It turns out that the Europeans are tired of listening to Netanyahu’s fairy tales, tired of his maneuvering to buy time and tired of his trying to have his cake and eat it too. This belated European insight was the result of American inspiration. The White House erased Netanyahu from its book a long time ago and doesn't believe a word he says. Now, it seems, the European capitals have had their own revelation.

“Experience has taught us that you simply can’t do business with Netanyahu,” said a senior European diplomat speaking on condition of anonymity. “Either he won’t pay the price, or he won’t deliver the goods, or he’ll simply slip away from the deal a minute before it’s implemented.” This is the famous Netanyahu method for which the Israeli leader could take out a patent.

Netanyahu acknowledges his strategy only in the most confidential of conversations with his closest associates. A political source told Al-Monitor on condition of anonymity that in a closed meeting years ago, Netanyahu said, “[My goal was] to blow up Oslo. I couldn’t cancel the agreements when I rose to power, so what I did was simply empty them of content. I made their implementation impossible.”

The issue now is what the Europeans' sobering realizations portend for the future. Do they herald an additional deterioration in relations between Jerusalem and the major European capitals, or do their expression reflect temporary frustration and the blowing off of steam? Evidently, Netanyahu would very much like to know the answer as well.

Introducing Herzog into the government as foreign minister might allow Netanyahu to facilitate a type of political “reboot” of Israel’s relationships with the West, on which Israel bases its position in the world.