On a short visit to Israel, German Foreign Minister Heiko Maas expressed concern over Prime Minister Benjamin Netanyahu’s annexation plan and called upon the government to return to the two-state solution. 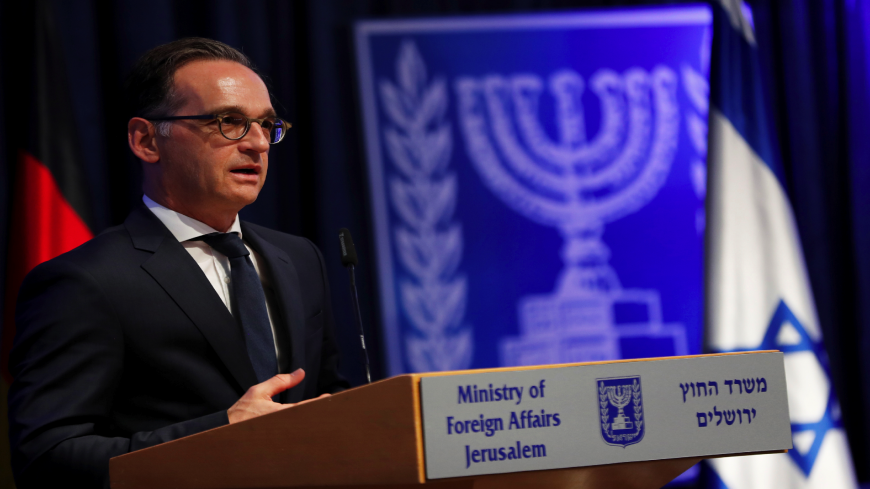 Speaking at a joint press conference with Israeli Foreign Minister Gabi Ashkenazi, Maas said, “I repeated here today the German position as well as our serious concerns as a special friend of Israel of the possible consequences of such a step.” Maas stopped short of threatening Israel with sanctions, simply stating, “I have not set up any price tags. We are in agreement in the [European Union] that we seek dialogue. Today, I am in Israel to be informed about the plans of the new government.’’ In an effort to preserve a positive approach, Maas tweeted, "What we need now is fresh, creative impetus to revive the talks between Israel and the Palestinians. We are prepared to work towards this together with our partners in Europe and the region if this is requested."

Maas' visit comes only three weeks before Germany takes over the presidency of the EU on July 1. This role will push Germany into an uncomfortable corner, especially since July 1 is also the date set by the unity government for the deal that enables Netanyahu to bring up his annexation plan for a vote. Traditionally considered Israel’s most important ally within the EU, Germany would rather not be the one sanctioning Israel over implementing sovereignty over West Bank settlements.

Germany is not standing at the forefront of the countries pushing to sanction Israel in case of annexation, but it has not refrained from voicing its concerns and warning Israel of the possible implications of such a step. Already in November 2019, Chancellor Angela Merkel’s spokesperson, Steffen Seibert, addressed Netanyahu’s annexation plan, saying, “We are calling on the Israeli government to refrain from actions that could hamper a two-state solution.’’ On April 30, Germany’s ambassador to Israel, Susanne Wasum-Rainer, was one of the 11 European envoys who registered a demarche with Israel’s Foreign Ministry, warning against the annexation plan.

Still, Berlin would rather not be caught between its alliance with Israel and the Israeli plan it considers to be a blatant breach of international law. Berlin estimates that such a dilemma would be counterproductive, leading to a breakup in the dialogue between Jerusalem and Brussels. There are also German diplomats who estimate that European sanctions won’t be enough to stop Netanyahu’s race to annexation.

Addressing German concerns, Ashkenazi signaled that no decision has been taken so far by the government over Netanyahu’s plan, and he pledged that US President Donald Trump’s peace plan "will be implemented responsibly, in full coordination with the United States, while maintaining Israel’s peace agreements and strategic interests. We intend to do it in a dialogue with our neighbors." Defense Minister and alternate Prime Minister Benny Gantz related to Maas the same message in their meeting, telling him that Trump’s plan would be promoted responsibly and through large international dialogue. Is that something that Maas could take with him as insurance to his meetings in Amman this evening? Not so sure.