The timing of the new law authorizing the prime minister and defense minister to declare war without consulting the Cabinet worries many Israelis. 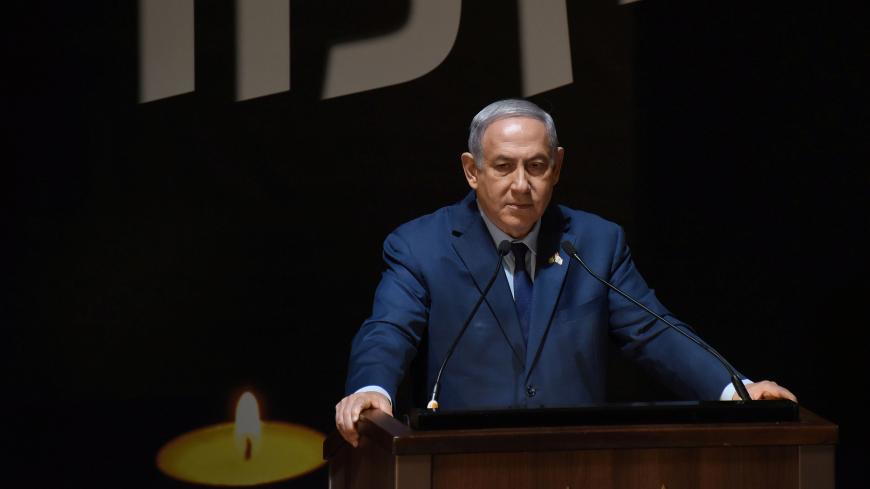 On the evening of April 30, the Knesset approved a proposal authorizing the prime minister and defense minister to declare war in extreme circumstances. That same night, Prime Minister Benjamin Netanyahu delivered a speech revealing a secret operation to retrieve the Iranian nuclear archive. The proximity between the broadcast of the “Iranian lie” speech and the authorization of the law, combined with the heating up of the security situation near Israel’s northern border, have justly created a sense among the public that we’re on the brink of war.

The question of why it was urgent for Netanyahu to push forward right now a law that grants him great power and simultaneously weakens the diplomatic-security Cabinet in a consequential decision to declare war was not subject to an in-depth or serious public discussion. Naturally, it was overshadowed by the drama of the speech Netanyahu delivered.

On April 30, Netanyahu put heavy pressure on the coalition, with the help of Justice Minister Ayelet Shaked of HaBayit HaYehudi and Foreign Affairs and Security Committee Chairman Avi Dichter of Likud, to authorize the law that very night; the proposal had encountered some difficulties until that point. The buzz on social media was that Netanyahu is making these moves in order to distance himself from the criminal investigations — that is, political spin a la House of Cards.

The bill in question is actually an amendment to the Basic Law: It redefines the forum in which a decision to go to war can be made in Israel. Clause 40a of the law says the "state shall not start a war save by force of a government decision.” Likewise, the law says an announcement of a government decision to declare war is to be made to the Foreign Affairs and Security Committee and to the Knesset as soon as possible.

The procedure — which on its face seems cumbersome — was not always carried out, and there were cases in which the Knesset plenum authorized a smaller forum to make decisions. One such case was the government meeting convened by Prime Minister Yitzhak Rabin to authorize the operation to liberate the civilians kidnapped at Entebbe in July 1976, which could have dragged Israel into war. Because of the many sensitivities and the critical need to maintain secrecy, the government was gathered to authorize the operation only after the planes were already in the air. Despite that, the fact that the government was convened even in these circumstances provided a dimension of transparency and responsibility among a forum of decision-makers. The gathering of the government on Yom Kippur in 1973, during which it was already clear that Israel was at war, was important as well.

Another example was the decision to undertake Operation Peace for Galilee in the summer of 1982 during the Likud government of Menachem Begin, which, according to the law’s stipulation, was brought to the government for authorization. The operation, which devolved into a controversial war, was then presented by Defense Minister Ariel Sharon and authorized despite opposition from Communications Minister Mordechai Tzipori of the Likud, who had a security background and challenged Sharon and Begin with questions that with time turned out to be precisely on point. The operation devolved into a long war whose strategy was managed by Sharon without transparency and without much control. While Tzipori did not prevent the war, his ability to express criticism was important, even in retrospect.

In an interview with Maariv in 2011, Tzipori spoke of the government meeting where he turned to Begin and said to him: “We can’t vote until we [have] heard from the head of the Mossad, the head of army intelligence and the foreign minister. Only after we hear from them can we vote. … I demanded to see maps and said that I don’t know what 40 kilometers means, that they should tell me exactly where they want to get to, with the names of places.”

In recent years it has become clear that clause 40 needed to be updated so that a more limited forum than the full government could decide on a declaration of war. It’s a logical change since it would limit the number of people expected to keep a secret and put the decision in the hands of those who are in any case exposed to classified material, diplomatic-security policy and challenges all year long.

This need was evident in the critical discussions in 2011 over the question of whether to attack Iran. The discussions were held in a forum called “The Eight,” which included Netanyahu, Defense Minister Ehud Barak and other senior ministers — but this forum was not authorized to make the decision. It was clear to decision-makers that they would have to convene the entire government in order to authorize a military action in Iran. The full government had never discussed the topic, and junior ministers then sounded worried about the possibility that one day they would be called out of nowhere to vote on attacking Iran while lacking the proper information and with the pressure of time as planes would already be in the air, as happened with Entebbe.

In June 2016, Netanyahu appointed a committee headed by Maj. Gen. (Res.) Yaakov Amidror that was charged with drafting a plan to make the diplomatic-security Cabinet’s work more efficient and appropriate to the times. According to one of its recommendations, the authority to declare war should be transferred to the Cabinet because of the need to limit the number of those privy to secret information and in order to allow a comprehensive debate before a decision is made.

What was authorized instead is a far-reaching law. It allows half the Cabinet to decide to declare war or undertake a large military operation — and in extreme circumstances, the prime minister and defense minister can make such a decision on their own.

The big problem with the law is that it not only strips responsibility from government ministers and even from Cabinet members in making such a significant decision, but it also grants enormous power to the prime minister, without check, to the extent that it damages the character of the regime as a parliamentary democracy.

The opposition’s fight to block the law has failed, even though it was joined by Likud member of Knesset Benny Begin, who summarized the significance of the amendment in an interview with Army Radio with characteristic understatement: “Not aesthetic, not clear and with far-reaching ramifications.” Now we can only hope that hasty use is not made of this power.