Iraqi air force targets IS sites in Syria ahead of elections

Despite earlier opposition to any Iraqi military intervention in Syria, Iraqi Prime Minister Haider al-Abadi ordered the air force to strike Islamic State sites in Syria for the second time this year. 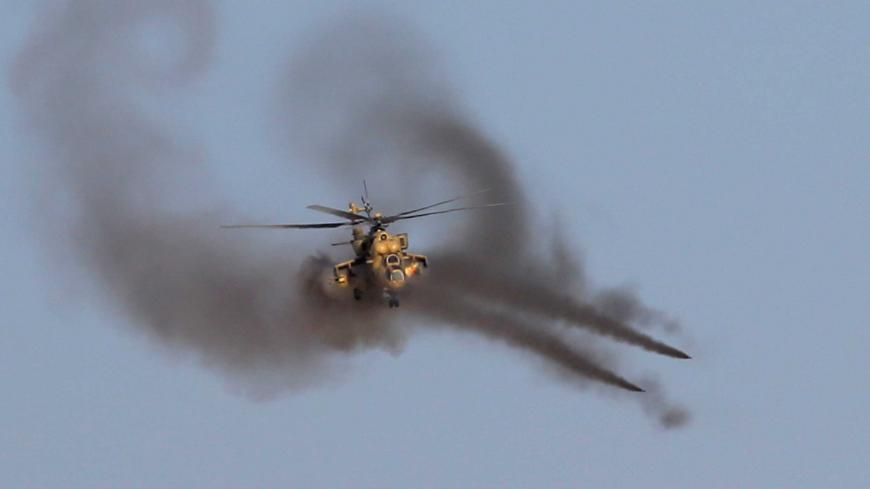 BAGHDAD — As Iraq prepares for general elections May 12, the Iraqi air force has carried out airstrikes on Islamic State (IS) sites inside Syria — the second operation of its kind this year.

A May 5 post on Iraqi Prime Minister Haider al-Abadi's official Facebook page announced, “Prime Minister and Commander-in-Chief of the armed forces Haider al-Abadi has ordered the heroes of the Iraqi air force to strike a site for IS leaders in the south of Dashisha in Syrian territory.”

The Iraqi air force carried out similar strikes April 18, targeting IS improvised explosives factories near the Syrian city of Abu Kamal. These strikes came hours after Abadi’s meeting with the US Special Envoy to Iraq Brett McGurk, which could suggest that Iraq received the green light from the United States.

The latest Iraqi airstrikes were carried out following the announcement by the leadership of the Iraqi Popular Mobilization Units (PMU) that it had foiled the infiltration of IS elements through the Tell Safouk border crossing between Iraq and Syria. In addition, PMU Deputy Chief Abu Mahdi al-Mohandis announced May 6, “The security situation in Iraq is still critical and some 20,000 extremist elements remain in the country."

All this points to the existence of an understanding between the United States, Iran, Russia, Syria and Iraq to target IS, which apparently continues to have an abundant number of fighters in its ranks. Abadi’s spokesman Saad al-Hadithi told Al-Monitor in this regard, “The Iraqi government has decided to strike IS sites within the Syrian territory in coordination with the Syrian side and with the knowledge of Moscow, Washington and Tehran, as these parties have troops in Syrian territory. The Iraqi military action was not unilateral.”

He added, “The strike has achieved its full objectives based on Iraqi intelligence, warding off imminent danger from the border with Syria and foiling IS plans to launch attacks inside Iraqi territory.”

Commenting on the reasons behind Abadi’s change of heart, who previously rejected any Iraqi military intervention in Syria, Hadithi said, “Abadi continues to refuse the entry of any Iraqi forces to Syria. [The recent strike] was a necessary urgent move to secure the western governorates of Iraq before the election date.”

Of note, Abadi denied the PMU leaders' request last year to enter Syrian territory to track down IS following the liberation of Mosul. “The duty of all security forces, of all kinds, is to liberate the Iraqi territories only — not other countries — from the clutches of IS,” Abadi said.

Majed al-Gharrawi, member of the Iraqi parliamentary Security and Defense Committee, told Al-Monitor, “The airstrikes were carried out in response to previous threats by IS to target polling stations, particularly in Iraqi areas liberated [from IS].”

He said, “It is Iraq’s right to preserve its sovereignty and safeguard its political system. There was no US pressure to carry out the strikes along the Iraqi-Syrian border.”

Gharrawi considered the military action to be “a prerogative of the Iraqi leadership, especially since there are still many IS hotbeds in the liberated areas despite the pre-emptive operations carried out by the security forces.”

Of note, some Iraqi leaders predicted days before the latest Iraqi airstrikes that the US fighters stationed in Iraq might carry out air sorties in Syria to target the terrorist organization.

“The United States is getting ready to launch an airstrike on selected targets in Syria from the Ain al-Asad air base, in the western part of the Iraqi Anbar governorate,” Qatari al-Obeidi, a PMU leader, said in a May 3 statement to Almaalomah website.

Obeidi noted, "The military base, hosting US forces, has been witnessing intensive air patrols.”

Parliament member for the Shiite State of Law Coalition Abdel-Elah al-Naeli, said in a May 1 statement, "The United States will use the Iraqi airspace and land to target neighboring Syria and to undermine its security following the achievements made there against terrorist groups.”

Washington may find it convenient that Iraq has carried out the airstrike on IS sites in Syria for many reasons. Mainly to involve Baghdad in Operation Inherent Resolve against IS that has been ongoing since 2014, but also because the United States wants to avoid embarrassment vis-a-vis Tehran and Damascus, which are against the US forces using the Iraqi territories, while both Baghdad and Washington have been denying the existence of US military bases in Iraq, stressing that the sites in Iraq are mere “American camps” whose mission is to combat IS.

Washington also wants to spare Abadi embarrassment at home in the run-up to the elections. This is why the United States launched May 7 its aircraft from the aircraft carriers in the Mediterranean toward IS sites in Syria.

The timing of the latest Iraqi airstrikes on IS contributes to strengthening security in the western governorates, reducing IS activities along the Syrian border, and perhaps “cleaning up” Abadi's image before the elections.