Iraqi Prime Minister Haider al-Abadi has announced that 40,000 Sunnis will join the mostly Shiite Popular Mobilization Units, fueling speculation that the new balance could lead to formation of a National Guard. 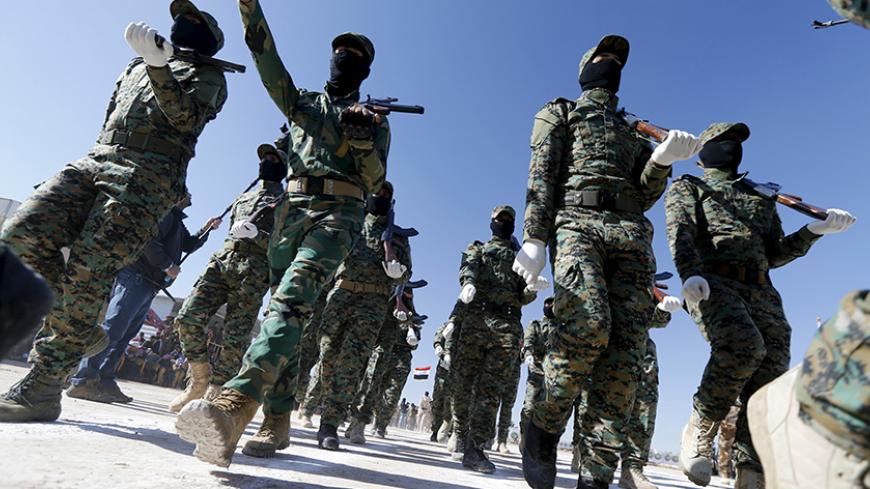 BAGHDAD — Sunnis are saying "sign me up" now that Iraqi Prime Minister Haider al-Abadi has approved the appointment of 40,000 Sunni fighters to the Popular Mobilization Units, a force that was once almost exclusively Shiite.

Samer al-Hamdani, who in 2014 fled from Beiji in northern Iraq to Baghdad, says he is ready to return to his liberated city and join up. He told Al-Monitor, “It is essential for the Popular Mobilization Units to include Iraqis of all spectra for it to become a national institution able to earn everybody’s approval and respect, away from sectarian labels.”

He added, “The presence of 40,000 Sunni fighters creates an important and necessary balance within the Popular Mobilization Units. But we hope the politicians’ positions and statements avoid sectarian incitement, so as not to offend the [group], which must be excluded from interventions and conflicts between the political blocs."

Iraqi parliament Speaker Salim al-Jabouri had said in June, “Sunnis find it difficult to join the ranks of the Popular Mobilization Units, and the door is not open for them to be part of it.” But the Iraqi government believes it has become necessary to officially involve Sunni fighters in the war against the Islamic State. Abadi’s decision could help change the public image of the Popular Mobilization Units as a Shiite fighting organization.

It seems that the units' image began shifting even before Abadi’s decision. Karim al-Nuri, the group's spokesman, told Al-Monitor, “Thousands of Sunni fighters joined the ranks of the Popular Mobilization Units months ago.” He described their presence as positive and necessary and said, “We believe that areas must be liberated by their residents, who know the geography and details relating to the people who joined the ranks of IS, and know information about the organization’s locations and weapons caches."

Nuri added, “Sunni volunteers are nothing like some Sunni politicians who are trying to discourage the morale of the fighters in the war against terrorism and offend some of them. [The volunteers] believe in the importance of defending their homeland."

The Iraqi parliament last year approved a draft law to create a National Guard. Adding Sunni fighters to the Popular Mobilization Units could set the stage for the force to become the core of the National Guard. The draft law has raised disputes between political parties, and parliament has not yet set a date to take further action. Yet supporters believe the proposal eventually will be approved.

Meanwhile, Abadi's spokesman Saad al-Hadithi told Al-Monitor, “Balance will be achieved in the National Guard law, according to political agreements. Prime Minister Abadi is making serious efforts to grant everyone their rights according to demographic proportions.”

The National Guard draft law stipulates the importance of having 5,000 Sunni fighters for every 1 million Iraqis.

Security expert Hisham al-Hashemi told Al-Monitor, “The presence of Sunni fighters within the Popular Mobilization Units ranks is a prelude to the establishment of a national military movement — which may be the National Guard — especially in light of the positive relationship between Shiite and Sunni fighters within the Popular Mobilization, as they are fighting side by side to liberate Sunni towns.”

The 40,000 Sunni fighters will be concentrated in the provinces of Anbar, Salahuddin and Ninevah, where they will be joined by 10,000 more at a later stage, he said.

The US-led alliance forces have trained almost 16,000 Iraqi fighters and police officers. Hashemi estimated that number includes almost 4,400 Sunnis. On Dec. 17, the US Embassy in Baghdad issued a press release stating, “The training was focused on guerrilla wars, de-mining, dealing with improvised explosive devices, rescuing operations in the battlefield and other important military skills necessary for the Iraqi security forces in their fight against IS.”

Weighing in on the matter, the Iraqi National Forces Alliance stressed the importance of balance in the military and the Popular Mobilization Units. After a Nov. 11 meeting between Jabouri and former parliament Speaker Osama al-Nujaifi, both members of the Sunni alliance, the group announced its position: Abadi is being put to the test and should implement the commitments stipulated by the political agreement, such as making reforms in the state institutions, achieving balance, working on achieving security and enhancing living conditions for Iraqis.

Jubouri, speaking by phone from the Hamrin Mountains region in northern Iraq, added, “The Iraqi government will be responsible for arming Sunni fighters and paying their salaries. We will be under the command of the Popular Mobilization Units’ officials under the current leadership. We will be directly linked to both the units’ leadership and the Iraqi army’s operations command."