The Iraqi government is moving to place the Popular Mobilization Units under the control of the prime minister, though some insist that the sectarian force must be dissolved after the Islamic State is defeated. 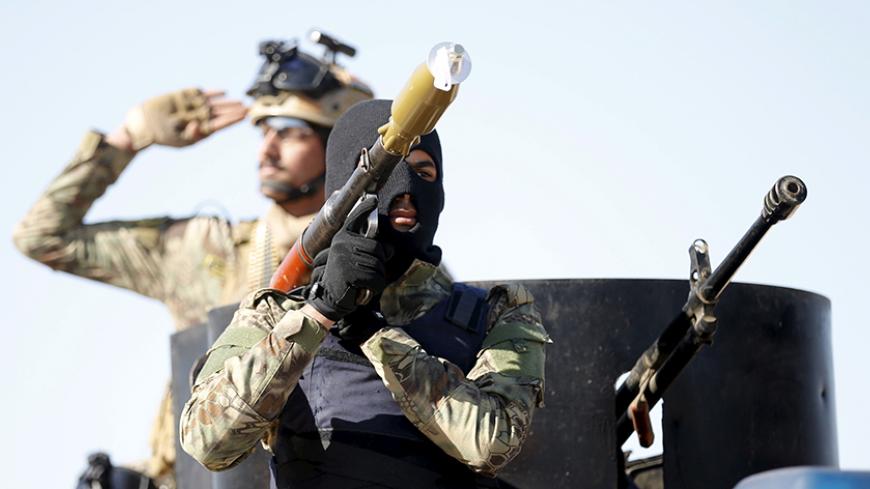 BAGHDAD — On July 26, the Iraqi government announced that the Popular Mobilization Units (PMU) will be converted into “an independent military formation affiliated with the armed forces’ commander-in-chief.” The Shiite force was formed in June 2014 in response to religious calls to take up arms against the Islamic State (IS).

Iraqi Prime Minister Haider al-Abadi’s decision sparked an uproar among Iraq’s Kurds and Sunnis. On Aug. 14, the Kurdish news site Rudaw collected the opinions of analysts and ordinary citizens, all of whom criticized the move as a step toward forming a parallel military force.

Other reports claimed that the government’s decision to take control of the PMU, which participated in the liberation of Salahuddin, Ramadi and Fallujah and are planning to join the battle for Mosul, reflects “a plan to establish a guard similar to Iran’s Revolutionary Guard Corps.”

Qasim Mozan, a reporter for the Iraqi Media Network, told Al-Monitor the government’s decision will “turn the PMU into a security force that follows the orders of the prime minister, [which would allow him] to fix any security gap [within the PMU] in a swift and efficient manner.”

Journalist Hassan al-Shanoun told Al-Monitor, “This project will distance the PMU from partisan and sectarian influence and will strengthen the government’s power [over the PMU] while weakening the political blocs that are part of the PMU factions.”

PMU leader Ahmed al-Assadi supported Abadi’s decision. He told Al-Monitor, “The PMU will turn into a government force that is independent from the political parties’ control, as it will report directly to the commander-in-chief of the armed forces, Abadi.”

The PMU are currently associated with known political forces such as the Peace Brigades led by the Sadrist movement, the Ashura Brigades affiliated with the Islamic Supreme Council of Iraq, Asaib Ahl al-Haq headed by Mahdi Army defector Sheikh Qais al-Khazali, the Hezbollah Brigades with their ties to Lebanese Hezbollah and the Badr organization led by parliament member Hadi al-Amiri.

Many factions part of the PMU today will probably wish for the organization to remain in its current form and serve as a legal cover for them to exercise their influence in a role similar to that of Hezbollah in Lebanon. Nevertheless, Assadi commented, “The factions that refuse to turn [the PMU] into an independent government force will be considered outlaws.”

Assadi added, “The decision has already been implemented, and government offices have been established in Iraq’s provinces. These offices are managed by civil and military figures who register the members of the armed factions willing to be part of the project to turn the PMU into a security force affiliated with the prime minister.”

The reluctance of some parties is not the only challenge for this project. Majid al-Gharawi, a member of the Iraqi parliament's Security and Defense Committee, told Al-Monitor, “There are [other] obstacles hindering the restructuring process of the PMU, namely the financial allocations and the inclusion of its budget into the state budget. Also, the exclusion of political figures from PMU operations will be hard.”

In either case — whether the PMU remain associated with partisan leaders or become a government force — the PMU are likely to remain after IS is defeated. On July 4, the Badr parliamentary bloc stressed the importance of the PMU continuing to protect civilians even after IS is completely defeated across the country.

However, some oppose the idea of the PMU remaining after IS’ elimination from Iraqi territories, which is expected to happen this year. They believe it is necessary to dissolve the fighting force. On the regional level, Saudi Foreign Minister Adel al-Jubair said July 2, “The PMU are sectarian, and they should be dissolved as they exacerbate sectarian tension.” Other local parties, such as Liqaa al-Wardi, a parliament member for the Union of Nationalist Forces, agreed, calling for the dissolution of the PMU in a press statement June 26.

According to the Sunni Union of Nationalist Forces, the alternative is to turn the PMU into a local force, with each province having its own army made up of its own residents. This “National Guard” idea is mentioned in the political reconciliation document adopted by the government.

Political activist Hadi Wali al-Zalimi told Al-Monitor, “The loyalty of the armed factions will remain limited to the leaders of parties, groups and regions. Naming those armed factions the ‘Popular Mobilization Units’ will not change the fact that they will remain loyal to the political or religious leaders that represent them and support them.”

It seems clear that positions toward the PMU depend on each party's political interests and relations with regional countries. Iran, for instance, backs the PMU and provides them with arms and financial support. Saudi Arabia is calling for the dissolution of the PMU, while the UAE classified some of the PMU factions as “terrorist groups” in 2014.

In any case, what is important for Iraq is that the strengths of the PMU are put to work for the country's interests. Should the PMU be dissolved, the fate of their members should not be neglected. Job opportunities should be offered to them, and the unemployed should receive welfare or retirement pensions. Their fighting experience could also benefit the security forces, and individuals could be recruited to work for them.