Iraq's Sadr sends positive sign to both the US and Iran

In an attempt to prevent the United States and Iran from objecting to his move toward forming the new Iraqi government, Sadr sends positive messages to both, stating that he will not stand against them. 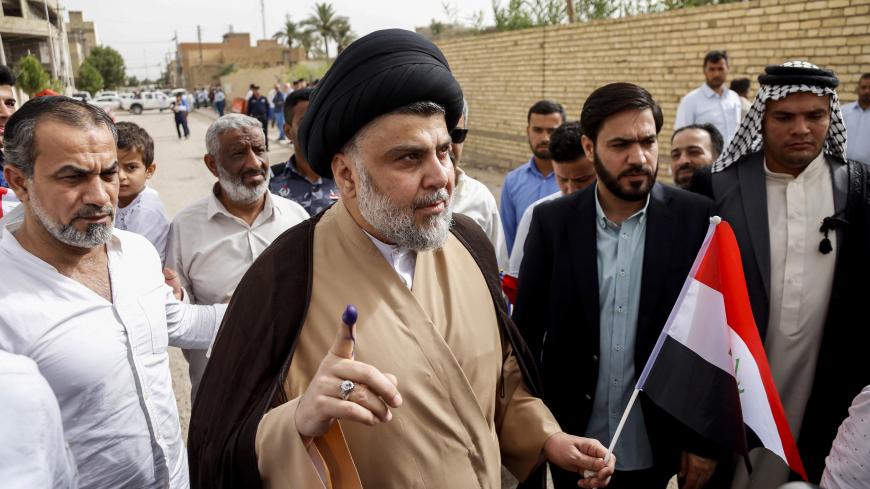 Iraqi Shiite cleric and leader Muqtada al-Sadr (C) shows his ink-stained index finger and holds a national flag while surrounded by people outside a polling station in the central holy city of Najaf, Iraq, May 12, 2018. - HAIDAR HAMDANI/AFP/Getty Images

The victory of the Sairoon Alliance, headed by Shiite leader Muqtada al-Sadr, in the recent Iraqi elections raised questions in the United States and Iran about the relations of the next Iraqi government with their respective countries, which both enjoy wide influence in Iraq.

The United States and Iran are closely following the negotiations for the formation of the next Iraqi government. Both parties fear that a government where Sadr enjoys the majority would affect Iranian and US influence in the country — albeit at various degrees.

Dhiaa al-Asadi, the director of Sadr's political office, said on May 23 that US officials contacted the Sairoon Alliance through mediators. They spoke about the Sadrist movement’s position toward the United States in case the alliance accedes to power.

“They asked what the position of the Sadrist movement will be when they come to power. Are they going to reinvent or invoke the Mahdi Army or re-employ them? Are they going to attack American forces in Iraq?” Asadi said, citing the talks between the alliance and US officials.

Asadi noted that the Mahdi Army was disbanded in 2008, and the Sadrist movement does not intend to re-establish it. “There’s no return to square one. We are not intending on having any military force other than the official military force, police forces and security forces,” Asadi told Reuters.

Asadi’s statement carries a positive message that the Sadrist movement, if it comes to power, will seek to overcome its enmity toward the United States. This could mean that in the Iraqi government Sadr will not be the same man who led his political party outside of the government.

In the past years, Sadr’s political behavior has varied. He has toned down the critical voice he once used against the United States. He has criticized the United States occasionally, but he hasn’t threatened the US presence in Iraq as part of the international coalition fighting the Islamic State. Sadr did not even hint at the possible formation of a military force outside the state to resist the United States, as he did in 2004 and 2008. The Mahdi Army has been completely disbanded.

In a phone call with a senior member in Sadr’s office in Najaf, Al-Monitor learned that Sadr is not willing to form or even support any forces against the US presence, but he will probably work through the Iraqi legislative system to legally expel all foreign forces, including the United States. The source who spoke to Al-Monitor on condition of anonymity insisted that Sadr rejects using violence against US forces, as they are in Iraq by request of the Iraqi government.

The number of US troops in Iraq is estimated at around 7,000 stationed in various military bases across the country, namely in Sunni-majority areas in northern and western Iraq. The Pentagon, however, has openly declared the presence of 2,500 soldiers in Iraq. Although IS has been completely expelled from Iraqi territories, the United States has yet to withdraw its forces from Iraq. There are signs that US troops will remain in the country for years to come. Iraqi Prime Minister Haider al-Abadi said back in February that Iraq needs the long-term presence of foreign forces, especially to ensure aerial cover. Sadr has not opposed these statements.

All of these signs show that Sadr, who insists that he is independent, is sending messages to both the United States and Iran that he will not adopt policies that threaten their interests inside Iraq.

Also, Sadr does not have a military force fighting in Syria, unlike most Iraqi military factions loyal to Iran. The latter have been fighting inside Syria alongside President Bashar al-Assad’s regime for years now. Sadr, for his part, has opposed the presence of any Iraqi force outside of the country and criticized those defending Assad’s regime, calling on the Syrian president to step down to pave the way for a democracy in Syria.

Sadr also established close and positive relations with US allies in the region, such as Saudi Arabia, the UAE and Jordan. He paid visits to Saudi Arabia and the UAE last year. On May 24, when Sadr was in Baghdad, he received a phone call from prominent Sunni businessmen Khamis al-Khanjar, who heads and supports the Sunni Iraqi Decision Alliance, which won 11 seats in the elections. Khanjar, who is known for his anti-Iranian positions, arrived at the Iraqi capital on May 24, after an eight-year absence.

Meanwhile, it seems the United States gave its blessing for the Sadrist movement to accede to power. US State Department spokesperson Heather Nauert said May 22, “We will work with whoever the Iraqi government and the people of Iraq decide to elect into its government.”

Regarding Iran, Asadi said in a televised interview on al-Mayadeen channel, “We have a steady relationship with Iran,” stressing that the “Sadrist movement and its partners will not yield to the US will.”

Iranian Ambassador Iraj Masjedi did not attend the meeting held between the region’s ambassadors and Sadr last week. Asadi said Sadr’s office sent an invitation to the Iranian ambassador in Baghdad, but he apologized and said he couldn’t make it.

Masjedi said, “The relations between Iranian officials and Sadr are friendly and brotherly. Many of those officials, including Qasem Soleimani, harbor great feelings of friendship for Sadr.”

Despite these general and diplomatic statements, the Iranians are not remaining silent about Sadr’s move toward forming the government. As Sadr announced on May 24 the completion of the final touches of forming the government, noting that it is "an authentic Iraqi government" with no any foreign interferences, Masjedi said in a meeting with a delegation from the Kurdistan Democratic Party that it is too early to talk about the formation of the Iraqi government. According to Masjedi, the Iraqi political forces are still negotiating, and it is important to not be in a hurry to form the new government.

In an attempt to form a rival alliance to Sadr’s, head of the pro-Iranian Fatah coalition Hadi al-Amiri hosted a meeting on May 24 with head of the State of Law coalition Nouri al-Maliki and a delegation from the two main Kurdish parties — the Kurdistan Democratic Party and the Patriotic Union of Kurdistan.

Iran is not being silent about Sadr’s move toward forming the new government, and the United States has yet to decide whether to put limits on Iran’s influence in Iraq by supporting Sadr, but at the same time, allow his anti-US movement to come to the power.