While Iran may not be the winner in Iraq’s election, it will likely remain the final broker. 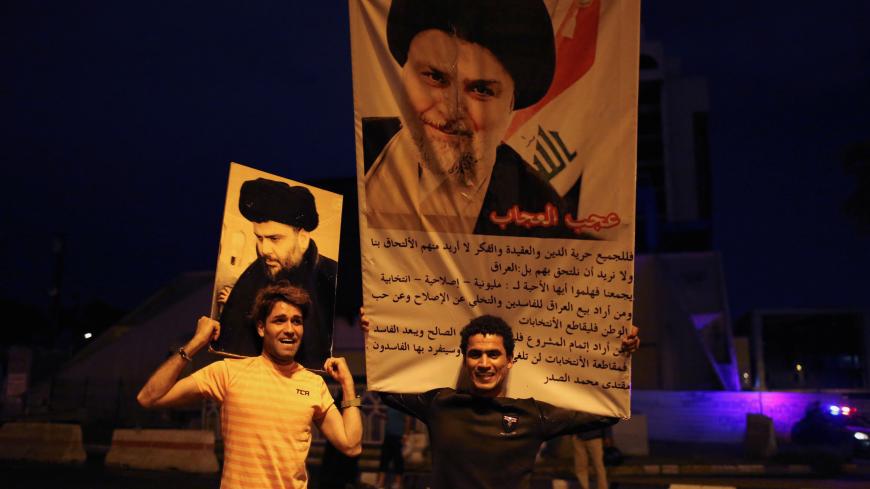 Iraqi supporters of the Sairoon Alliance celebrate with portraits of Shiite cleric Muqtada al-Sadr after the results of Iraq's parliamentary election were announced in Baghdad, Iraq, May 14, 2018. - REUTERS/Thaier al-Sudani

If Haider al-Abadi retains the Iraqi premiership, he will have done so with Iran’s blessing. Iran and Iraq have maintained good relations throughout Abadi’s tenure. Abadi owes Iran and the Popular Mobilization Units, including those backed by Tehran, for their decisive role in responding to the ill-fated Iraqi Kurdish referendum last year, a huge win for Abadi.

Abadi may not be the first choice among Iran’s leaders, but they have a well-established working relationship. Abadi also depends on Washington, but Tehran will likely be the last stop on the road to a new government in Iraq.

Expect Iran to ask for some shift in Iraqi statements toward the United States as its tax on a final deal. Given the more aggressive US approach to Iran’s "malign behavior," Tehran will be sure that the next Iraqi government makes a point — somehow, some way — that Baghdad will not be squarely in the American camp. Abadi, while seeking to preserve strong ties with the United States, has also said that Iraq should not be an arena for US-Iran conflict.

There's no question that the surprise showing of the Sadrist movement with 54 seats represents progress toward an independent Iraqi identity, including perhaps a more youthful demographic. In second place, however, came Iran’s preferred group, the Fatah Alliance, with 47 seats. Abadi’s Victory Alliance came in third with 42.

The Kurdistan Democratic Party, which received 25 seats, may see a comeback in Iraq depending on Iran’s good offices and some type of arrangement with Abadi. The Kurdistan Regional Government hosted a conference on economic relations with Iran a week before the Iraqi elections.

“In the past years, Sadr’s political behavior has varied,” he writes. “He has toned down the critical voice he once used against the United States. He has criticized the United States occasionally, but he hasn’t threatened the US presence in Iraq as part of the international coalition fighting the Islamic State. Sadr did not even hint at the possible formation of a military force outside the state to resist the United States, as he did in 2004 and 2008. The Mahdi Army has been completely disbanded.”

Mamouri adds, “In a phone call with a senior member in Sadr’s office in Najaf, Al-Monitor learned that Sadr is not willing to form or even support any forces against the US presence, but he will probably work through the Iraqi legislative system to legally expel all foreign forces, including the United States. The source who spoke to Al-Monitor on condition of anonymity insisted that Sadr rejects using violence against US forces, as they are in Iraq by request of the Iraqi government.”

The oft-repeated enmity between Sadr and Iran may also be overstated, despite Sadr’s outreach to Saudi Arabia, as well as differences with Tehran over Syria. “Sadr does not have a military force fighting in Syria, unlike most Iraqi military factions loyal to Iran,” Mamouri continues. “The latter have been fighting inside Syria alongside President Bashar al-Assad’s regime for years now. Sadr, for his part, has opposed the presence of any Iraqi force outside of the country and criticized those defending Assad’s regime, calling on the Syrian president to step down to pave the way for a democracy in Syria.”

Sadr has already met with Fatah Alliance leader Hadi al-Amiri and Dhiaa al-Asadi, the director of Sadr's political office, “said in a televised interview on al-Mayadeen channel, 'We have a steady relationship with Iran,' stressing that the 'Sadrist movement and its partners will not yield to the US will.' Iranian Ambassador Iraj Masjedi did not attend the meeting held between the region’s ambassadors and Sadr last week. Asadi said Sadr’s office sent an invitation to the Iranian ambassador in Baghdad, but he apologized and said he couldn’t make it. Masjedi said, 'The relations between Iranian officials and Sadr are friendly and brotherly. Many of those officials, including Qasem Soleimani, harbor great feelings of friendship for Sadr.'”

Iran is staking its claim as the final arbiter of government formation and influence in both Iraq and Lebanon in order to thwart US pressure. In Lebanon, Hezbollah’s role will come under even greater scrutiny, not only as a result of US sanctions, but also the lag in international donor funds, which are conditioned on reforms that will largely depend on the role and policies of Hezbollah, backed by Iran.

Another barometer of US pressure on Iran will be whether China, the world’s largest oil importer, insists its oil purchases be paid in yuan as a means to undercut US sanctions. This could all be part of the broader negotiations in US-China trade or a potential major crack in the US sanctions regime.

Another concern for the Trump administration could be French President Emmanuel Macron's call for “European financial sovereignty” while seated with his Russian counterpart, Vladimir Putin, at the St. Petersburg International Economic Forum May 25. Macron may be seeking to bless Russia as the "go-to" mediator between Israel and Iran, as we reported here two weeks ago, in order to re-establish some Eureopean Union influence given the more aggressive US approach to Iran.