Will Egypt implement ban on YouTube over anti-Islam video?

Almost six years after the release of the "Innocence of Muslims" movie trailer on YouTube, Egypt’s Supreme Administrative Court issued a ruling to block the site for a month, but some question whether the decision will be carried out. 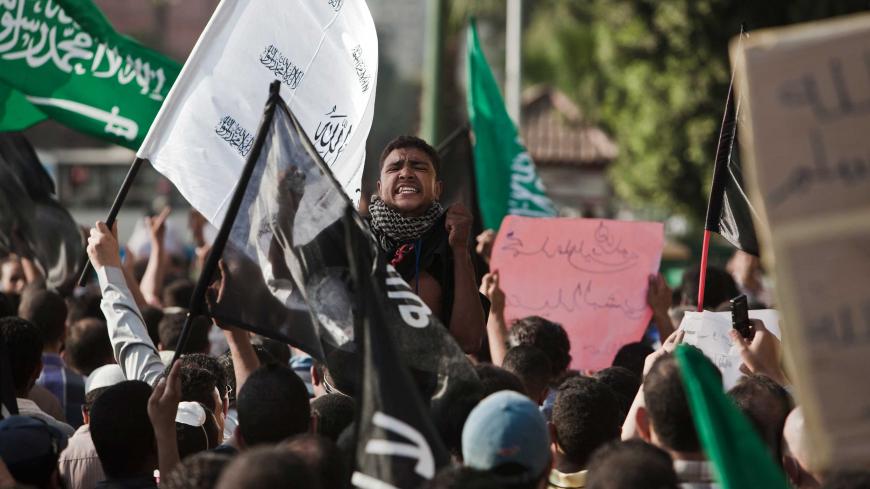 An Egyptian protester chants during a protest demonstrating against a US-made film said to be defaming the Prophet Muhammad, the trailer for which was released on YouTube and translated into Arabic, Cairo, Egypt, Sept. 14, 2012. - Ed Giles/Getty Images

CAIRO — Egypt’s Supreme Administrative Court, headed by Judge Ahmed Abu al-Azm, the president of the Egyptian State Council, issued May 26 a final ruling obliging the Egyptian National Telecommunications Regulatory Authority (NTRA) to block YouTube for one month. The ruling came in response to YouTube hosting promotional trailers from June 2012 of a film that disparages the Prophet Muhammad. Yet questions remain about whether or not the Egyptian government will implement the ban.

The film, called "Innocence of Muslims," is produced by Nakoula Basseley Nakoula, an Egyptian-born Coptic Christian who resides in the United States. Segments of the film were first released on YouTube in June 2012, which prompted Egyptian lawyer Mohammed Hamed Salem to file a lawsuit against the website. While an initial ruling was issued on Feb. 9, 2013, to shut down YouTube for a month, the government appealed the ruling.

Salem told Al-Monitor that the ruling is an act of revenge for the dignity of the Egyptians.

The Supreme Administrative Court explained the reasoning behind its ruling, saying, “The hosting of the video on YouTube affected national security, as seditionists exploited it to feed sectarianism and deal a blow to national unity in the country. Protests and violence swept across many parts of the country to denounce this offensive video.”

The court said the ruling will act as a “deterrent and a warning to such sites and to anyone who might be tempted to tamper with the Egyptian people’s religious and spiritual beliefs and tenets under the pretext of freedom of thought and expression. This causes hatred and conflicts among sects and factions …”

On Sept. 12, 2012, armed men attacked the US Consulate in Benghazi to protest the American-made anti-Islam movie. The attack led to the killing of US Ambassador to Tripoli J. Christopher Stevens along with three other Americans.

Salem said that YouTube content is not sufficiently controlled, and stressed the need for greater controls that would ensure respect for people’s cultures and beliefs.

Asked about the implementation of the ruling, Salem said that the Egyptian government is bound to block the website and prevent its 70 million Egyptian users from having access to it.

“The government refused to block the website when the initial ruling was issued in 2013 under the pretext that it was tough to implement, but it can block it now just like it did with other websites accused of incitement against the state,” he added.

Of note, the Egyptian government and the NTRA, which is responsible for implementing the ruling, have yet to issue an official stance on the ruling and its implementation mechanisms.

However, the local Youm7 website quoted the head of the NTRA as saying that they are waiting for the official version of the ruling to discuss its implementation.

While the government is obliged to implement the ruling as soon as it receives its official version in about a month, observers and communications experts told Al-Monitor that they do not expect the government to block YouTube.

Walid Hajjaj, a researcher focusing on information security at Egypt’s Nile University, told Al-Monitor that technically the NTRA can block YouTube just like it blocked a lot of websites over the past year. However, he said that for more reasons than one, he does not think the Egyptian government would take such a step.

He added that unlike China or the United States, Egypt is not an economic, technological or political hub, and it cannot place pressure on such companies. He also said that blocking YouTube would disrupt Google's internet search engine.

Hajjaj said that Google and YouTube provide many services to users and governmental institutions in Egypt, and there is no other alternative in Egypt.

“I hope we will be able to implement the ruling in order to place pressure on the company providing this service to prove that we are able to punish it when it makes mistakes that harm the state, but things on the ground do not seem to be going in this direction,” he added.

Hisham Abdel Ghaffar, a communications expert who has worked for various tech companies, told Al-Monitor that the implementation of the ruling requires a political decision. “Will the government institutions be able to afford the political, social and economic cost that would ensue? Of course not,” he said.

He added that YouTube has an overwhelming impact on Egyptians, and the ruling is not compatible with the reality on the ground. A lot of people use YouTube as a business tool that allows them to make large investments.

Abdel Ghaffar said that the Egyptian government contacted YouTube following the release of the anti-Islam video and explained its stance to the company, which was very cooperative and deleted most of its links.

With the rise of extremism in the world, YouTube faced a wave of criticism and political pressure that led it to use artificial intelligence techniques to monitor and delete prohibited content such as incitement to violence, hatred and extremism.

Said Sadek, a professor of political sociology at the American University of Cairo, told Al-Monitor that the ruling cannot and will not be implemented by the government. He stressed that the government and its institutions will be severely affected in the event YouTube is blocked. Even at university, YouTube has become an essential teaching tool, he said.

Sadek stressed that there are other ways to face such videos, and these include carrying out large awareness campaigns across the country and increasing young people’s awareness.

Although the former head of Egypt’s State Council, Mohammed Hamed el-Gamal, told Al-Monitor that no matter the difficulties, the government is obliged to implement the ruling in accordance with the constitution, it does not look like the government is going to execute the ruling.