Calls for blocking Facebook in Egypt will not yield the desired results, according to some experts, as terrorist ideas and rumors can continue to spread on other websites. 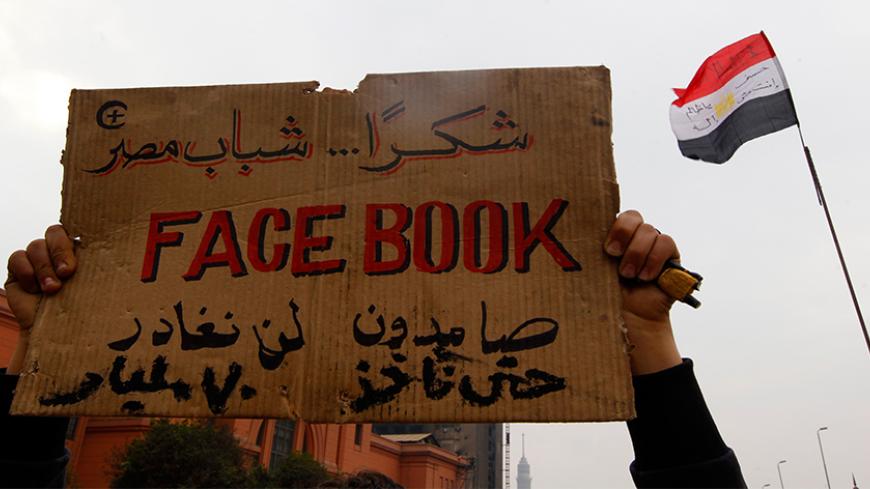 CAIRO — The Egyptian Administrative Court rejected a lawsuit Aug. 25 that called to block the social networking website Facebook in Egypt, but an appeal could be in the works.

Activists on Facebook had been voicing their concerns over the lawsuit since lawyer Mahmoud Goueily filed it on May 31, 2014. The activists see Facebook as an avenue of freedom and a tool to discuss political issues in Egypt.

Goueily filed the lawsuit against Prime Minister Ibrahim Mehleb and Telecommunications Minister Khaled Najem. He called on the court to block Facebook on the grounds that the site allows people to impersonate state figures in the absence of the slightest controls, helps spread immorality and rumors, and perpetuates false news that can support terrorist offenses.

The lawsuit is not the only one of its kind in Egypt. In November 2014, lawyer Mohammed Hamed Salem filed a similar lawsuit and called on the government to block Facebook and Twitter, charging they are used to incite violence and aid terrorists in planning attacks against the people and the Egyptian state.

The only time direct attempts were made to block Facebook in Egypt came in 2011 with the outbreak of the January 25 Revolution. When moves to block the site failed, Internet service was temporarily cut off across the country on Jan. 28, 2011, allegedly to break the power of mass protests.

That cutoff spawned several lawsuits against former President Hosni Mubarak and telecommunications companies. On May 8, 2011, the Administrative Court fined Mubarak, his former Prime Minister Ahmed Nazif and former Interior Minister Habib al-Adly $90 million as compensation for the economic damage incurred when mobile and Internet services were cut off.

Since then, the government has not sought to block Facebook. However, former Interior Minister Mohammed Ibrahim stated in June 2014 that monitoring Facebook does not restrict freedoms. He said his ministry developed a system to monitor social networking sites for security risks.

“The website [Facebook] helps spread terrorist calls and is used by promoters of these ideas in training people on how to make bombs, which is a disaster by any measure,” Goueily told Al-Monitor when he explained what led him to file a lawsuit.

He said that Facebook contributes to the spread of rumors on hundreds of pages that pretend to represent official bodies and dozens of fake pages bearing the name of Egyptian intelligence. News websites then spread those rumors as reliable information.

Goueily said he will consider appealing the court ruling within 60 days after reviewing details of the court’s rejection. The court said freedom of information confers the right to receive information and ideas and transfer them to others without limits. The court stressed that protecting public order and national security cannot be achieved by cutting off and spying on communication services, but rather by controlling delinquents and people hostile to civil liberties.

Mohamed Nour Farhat, a constitutional jurist at Zagazig University, told Al-Monitor the lawsuit violates the constitution and restricts freedom of opinion and expression. He said he cannot imagine a society claiming to be an open society, even to a small extent, without social networking websites such as Facebook and Twitter. Farhat also said any lawsuits in this field should focus on the importance of such websites in guaranteeing access to information and freedoms of expression and opinion, not on blocking them.

If Facebook is used to spread false rumors that affect national security and incite panic, he said, then the person responsible should be punished based on the penal code. Social networking sites must remain untouchable, both legally and constitutionally, he added.

Farhat called on Goueily to file a complaint with the public prosecutor against managers of pages that spread terrorist ideas or with the electronic crimes administration in the Ministry of Interior, which is tasked with monitoring such websites. Closing or blocking Facebook is not the solution, he said.

Mohammad Hanfi, media adviser at the Ministry of Communications, said it is impossible to block Facebook or any international forum due to many technological difficulties and the resulting high costs. Communications expert Hossam Saleh also said blocking Facebook in Egypt would be impossible, even with a court ruling, as the website server is not in the country. That's why the government had to cut off Internet service in 2011, since it wasn't able to block Facebook.

Another reason blocking Facebook is not feasible, he said, is that there are hundreds of other websites that can be launched to disseminate ideas. The solution would be to raise awareness, not block websites.

Political activist Israa Abdel Fattah pointed out that Facebook is also used and relied upon by the state to address the public. There are pages for the president of the republic, the Ministry of Interior and the military spokesman of the armed forces. She agreed that the solution to counter terrorist ideas is to track terrorists, and there are many ways to find the Internet addresses and hosts of those pages.

Facebook represents an important tool not only for political activists, but for Egyptians of all classes. As Egypt is the top Facebook user among Arab countries, it would be hard for 22.4 million Egyptians to live without it.