A fierce attack has been launched on Palestinian social media content, as dozens of accounts of Palestinian activists, journalists and media institutions have been restricted and deleted in the past year and after the latest Israeli war on Gaza. 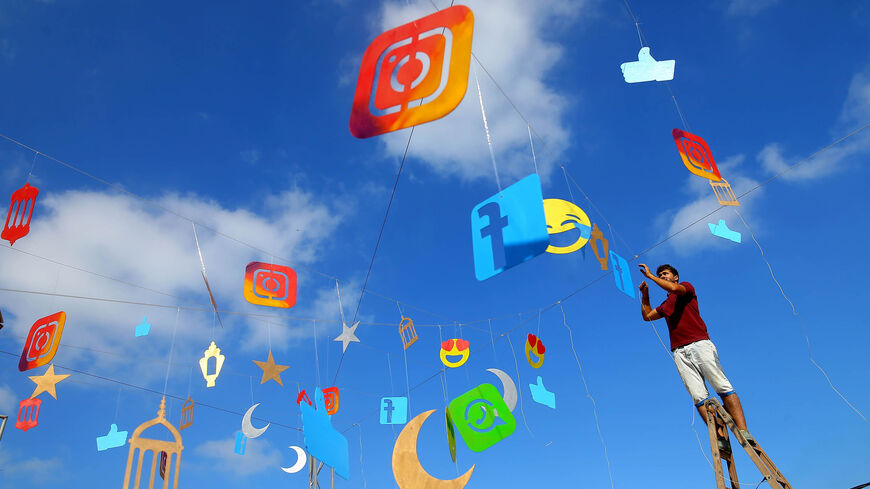 A Palestinian artist decorates the Qahwetna Cafe (Our Coffee) a day ahead of Ramadan, Gaza City, Gaza Strip, May 26, 2017. - Mohammed Abed/AFP via Getty Images

A fierce attack has been launched on Palestinian social media content, as dozens of accounts of Palestinian activists, journalists and media institutions have been restricted and deleted after they increased in numbers in the wake of the recent three-day Israeli war on the Gaza Strip.

These social media accounts had published pictures of the victims and wounded and praised the resistance operations and bombing of Israeli cities, thus prompting a campaign on the Palestinian news and narrative, which activists accuse Israel of being behind.

Facebook is the platform where digital violations against Palestinian content were most committed, as the center monitored 50 violations during the month of July alone on Facebook, while five violations were committed on TikTok and three on Instagram.

The center also monitored 17 violations against accounts of journalists and news organizations for publishing news related to the Palestinian cause.

In its annual report monitoring violations on social media for the year 2021, which was released in early August, the Journalist Support Committee stated that social networking sites adopt a double standards policy and are clearly biased toward Israel, as they fail to implement any kind of professionalism, objectivity or freedom of opinion that communication platforms claim to have. These work on hiding the Palestinian narrative, and they maintain a continuous campaign against Palestinian content, according to the committee.

The Journalist Support Committee, a Palestinian NGO formed in 2016 by journalists to promote media freedom and the rights of journalists, explained in its annual report that social media platforms, especially Facebook, are tightening the noose around the journalistic and media work of Palestinian websites, news agencies and personal accounts of journalists because of their content. These social media platforms either prevent publications from reaching followers, restrict pages, delete publications or prohibit the use of certain features, the committee continued.

Nidaa Basumi, media coordinator at the Sada Social Center, told Al-Monitor, “Facebook and Instagram in particular, and some other social media websites, suppress Palestinian content and attack the Palestinian narrative under pressure from the Zionist lobby abroad. Prior agreements were concluded with the occupying state [Israel] in order for such websites to delete any content that Israel deems as inciting terrorism and violence. This is why we witnessed during the recent period the restriction and deletion of dozens of accounts of journalists, media organizations and activists.”

She said, “Palestinians do not have the ability [or influence] to control this digital world that is subject to international agreements and policies. This has led some social media companies to be biased toward certain countries at the expense of others, and this is one of the most important challenges facing Palestinian digital content.”

Bassumi noted, “The occupation [Israel] creates special rooms for groups of settlers whose tasks consist of combating the Palestinian narrative and content, by submitting reports to websites and claiming incitement to terrorism and violence.”

She added, “Leaders and figures that Palestinians consider to be militant and political figures have recently been classified on Facebook as terrorists and dangerous. This is why the highest number of violations have been monitored on Facebook and Instagram. However, this does not mean that these are the only websites where violations are committed, as TikTok, Twitter, YouTube and WhatsApp also suppress Palestinian content.”

She stressed, “The so-called Israeli 'Facebook Bill' passed in January the first reading of the Israeli Knesset. This bill seeks to prosecute and arrest anyone who publishes any content that incites violence and hatred. Meanwhile, 145 people from the occupied Palestinian territories and Jerusalem have been arrested during the first half of 2022 against the background of posts published on Facebook. These were digitally silenced and prosecuted.”

Asked about the alternatives that the Palestinians could resort to so as to curb the suppression of their digital content, Bassumi said, “During the August Israeli war on Gaza, activists and journalists resorted to Twitter and Telegram to publish news and developments. Telegram, for instance, did not commit any violations against Palestinian content.”

According to the social networking report for 2021 issued by Ipoke, a Palestinian website specialized in digital studies, Facebook was the most widely used application among Palestinians in 2021 with a rate of 95.16%, followed by WhatsApp with 81.5% of users, and then Instagram with 63.28%, TikTok with 27.70% and Twitter with 26.14%.

According to Ipoke, 6.9% of Palestinian users have been summoned and 6.1% arrested by the Israeli authorities over their posts and content on social media.

Salah Abdel-Aty, head of the International Commission to Support Palestinian People’s Rights, told Al-Monitor, “The Facebook administration implements double standards as it fights Palestinian content and turns a blind eye to calls made by some [Israeli] settlers on social media accounts for the killing of Palestinians. This policy started when the occupation reached out to social media websites, most notably Facebook, to suppress Palestinian content under the pretext that it incites violence and murder against Israelis.”

He said, “The digital restriction of Palestinian activists as well as press, legal and community institutions is a clear and systematic violation of freedoms of opinion, expression and publication, in an attempt to prevent the coverage of violations committed by the Israeli authorities against the Palestinian population — be it in the Gaza Strip, the West Bank or even inside the occupied territories.”

Abdel-Aty noted, “The Palestinian press union institutions need to do better when following up on such violations, as it is necessary to find a digital system that helps convey the Palestinian narrative to all parts of the world along with the crimes of the occupation against the defenseless civilian population. Social media where less censorship is imposed on Palestinian content should be resorted to. There also needs to be a serious and international official stand against the Facebook administration.”

He concluded, “The support shown by social media administrations for the occupation provided a fertile environment for the Israeli authorities to pursue dozens of Palestinian activists and media institutions under the pretext of inciting terrorism.”