Twitter and Instagram recently blocked and suspended the accounts of several activists covering the recent events in Jerusalem’s Sheikh Jarrah neighborhood, with Palestinians accusing Israel of being behind this campaign. 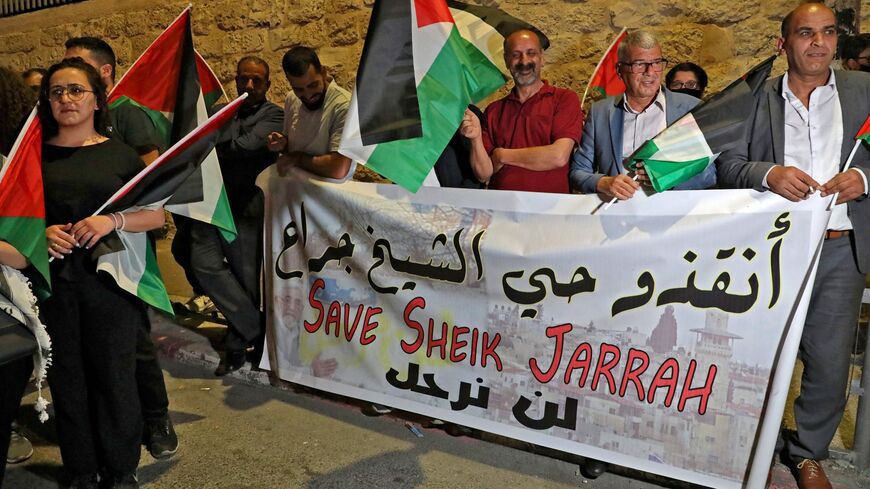 Palestinians in Bethlehem, in the occupied West Bank, stage a protest in solidarity with Palestinian residents of the East Jerusalem neighborhood of Sheikh Jarrah, who are facing eviction from their homes, on May 10, 2021. - HAZEM BADER/AFP via Getty Images

GAZA CITY, Gaza Strip — Sada Social, a Palestinian youth initiative aimed to confront challenges to the Palestinian cause on social media, has condemned Twitter for shutting down dozens of accounts of activists covering the attacks by the Israeli army in the Sheikh Jarrah neighborhood in Jerusalem.

The accounts were using the #SaveSheikhJarrah hashtag, in both English and Arabic. The May 6 statement demanded the reactivation of the 70 suspended accounts and for all users to be allowed to express solidarity on Twitter without discrimination.

On May 8, Sada Social also condemned Instagram for removing the hashtag #Al-Aqsa as many users were posting about it. The group also said the account of activist Muna al-Kurd was suspended.

Sada Social said it found 38 violations against Palestinian content on social media during the month of April. It said there were 1,200 in total in 2020.

Kurd, a 23-year-old journalist and activist residing in Sheikh Jarrah whose Instagram account was suspended for 24 hours, told Al-Araby Al-Jadeed on May 9 that the neighborhood’s residents relied on her to post about their cause since she is a journalist. She said that in cooperation with activists from Jerusalem, from outside Jerusalem and from outside Palestine, she started using the hashtag #SaveSheikhJarrah in her posts and videos March 13.

Meanwhile, activists are calling on the Jordanian government to commit to its pledges and make the Israeli authorities recognize the Palestinians’ ownership of their homes and are demanding international protection so Israel does not force the residents out. For over two weeks, confrontations have been ongoing over the ownership of the land on which four Palestinian families live, while a settlement association demands their eviction.

“Israel is not only suppressing us in real life but also on social media, which shows that we are making a difference and we must continue to use the hashtag,” Kurd said in her story.

Khaled Safi, a social media consultant, told Al-Monitor that activists were using all the tools available to them to convey what is happening in the Sheikh Jarrah neighborhood. “They have moved the battle from the field to the electronic and digital space, conveying the events live.”

He said activists have now assumed the role of news agencies,  monitoring events and reporting to their audiences. Not only did activists post about the developments, but they also went live on social media platforms with public figures and celebrities from all over the world to convey the truth of what is really happening in Jerusalem — be it in Sheikh Jarrah, Bab al-Amoud or the courtyards of Al-Aqsa Mosque — and even recently the Gaza Strip, Safi said.

He said the hashtag, #SaveSheikhJarrah, contributed to spreading the cause more broadly, as activists were able to reach the West and other parts of the world. “When the hashtag reached public figures, celebrities, diplomats, and politicians, they all interacted positively and shared posts and videos they came across, thus reaching more people and raising awareness about the issue of Jerusalem and Sheikh Jarrah,” Safi said.

He said that as a result of Israeli pressure, social media platforms find themselves forced to restrict Palestinian content. He said Israel has long pursued steps to block the Palestinian narrative and suspend the accounts of Palestinian journalists and activists.

Safi said the platforms claimed to have removed posts and suspended accounts under the rationale that they were violating privacy and community standards, but he said the truth is that the hashtags do not fit the narrative that Israel wants to communicate to the world.

He said, “Israel has managed to change the world's view of what is happening in Palestine over the decades, and has twisted the facts, through its control of the official media in most foreign countries. So it does not want social media to destroy what it has built during those years by spreading a Palestinian message that is completely different from what the pro-Israel foreign official media is accustomed to.”

Safi said the blockage of content shows that Israel's campaign has been a success.

The director of Fimed Media Foundation in Istanbul, Ibrahim Al-Madhoun, told Al-Monitor that he thought the campaign in support of the people of Sheikh Jarrah was effective, saying the reason for the success of the hashtag #SaveSheikhJarrah is that it is a humanitarian issue involving the human right to own housing. He said posters' documentation of the events taking place in the neighborhood contributed to reaching a wide audience.