"7or" will collect, document and take action on restrictions facing Palestinian content. 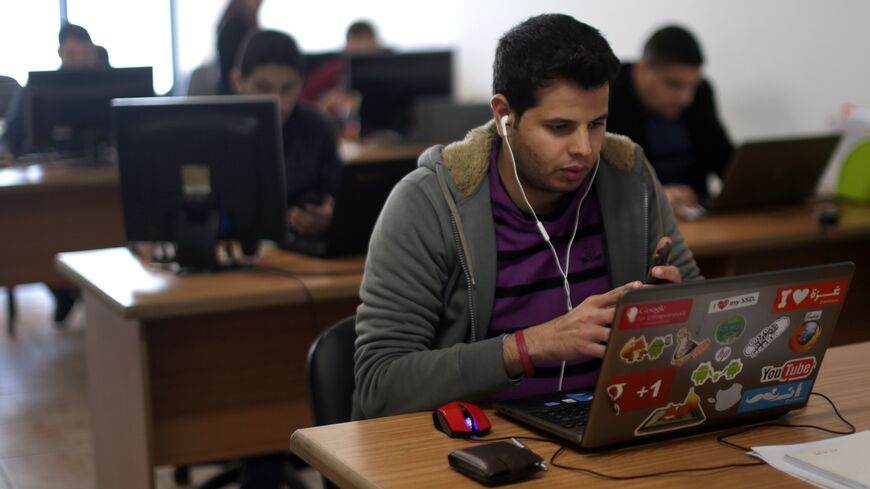 A Palestinian man works on a laptop at the Unit One startup in Gaza City, April 18, 2015. - MAHMUD HAMS/AFP via Getty Images

RAMALLAH — Palestinians now have a resource where they can file complaints about and track infringements of their digital rights on social media, The Arab Center for the Development of Social Media (7amleh) has created a new platform to monitor and take action on violations of Palestinian digital rights.

The complaints include account suspension and content deletion by the social media companies, as well as defamation, hacking, spreading false news, gender-based harassment, abusive comments and hate speech by individuals. Complainants point out that the restriction and suspension of their accounts can reduce viewership and ultimately reduce activists' impact on the public opinion.

Called “7or,” Arabic for "Free," the platform is a response to the blocking of dozens of pages belonging to sites and institutions.

The idea of ​​the observatory, he added, is to monitor and document digital rights violations committed by authorities or companies and work with companies and social media platforms to put an end to such practices.

According to the platform, since early 2012, the center has recorded a total of 749 violations of Palestinian digital rights, of which 672 were against individuals, 22 against nongovernmental organizations, 15 against media outlets, nine against private companies and 31 in other categories.

According to Qadi, the platform has established partnerships with eight institutions in Palestine and the organizers are seeking more such connections with local institutions as well as government agencies.

In October 2019, the Palestinian Authority blocked the websites of 50 Palestinian media outlets, most of which are still blocked today.

7amleh manager Nadim al-Nashef told Al-Monitor that the platform is the result of years of research and documentation efforts. He said, “This platform came to light following years of work on the issue of Palestinian human rights violations, especially violations against free expression and the digital activity of Palestinian citizens and foreigners expressing solidarity with the Palestinian cause.”

Nashef said that this platform draws its credibility from the fact that 7amleh holds "trusted partner" status with Facebook, Twitter and TikTok. He added that the group's ultimate goal is to change the policies of these companies, saying that some progress has been made.

“The issue is huge and challenging, but we believe that there are some changes that have occurred,” he added.

Mahmoud Alfranji, coordinator of the Council of Human Rights Organizations in the West Bank and Gaza Strip, expressed to Al-Monitor the importance of the platform as a database of violations committed by social media companies, Israel and the PA that can be used to file complaints and supplement other legal files as well, creating an atmosphere of international advocacy.

According to Alfrangi, centers dedicated to digital rights offer a great opportunity to advocate for Palestinian human rights. He said that initiatives like 7or are supported by the Palestinian Coalition for Digital Rights, established by the Council of Human Rights Organizations in 2019.

Alfrangi said, “The platform is an opportunity to defend our rights in international forums and resist the international community's politicization of the rights of the Palestinian people.”